College Football Season Is Nearly Over. Then the Big TV Negotiations Begin.

Kevin Warren, the commissioner of the Big Ten Conference, might exhale slightly on Saturday afternoon in Indianapolis once the final whistle blows and Northwestern or Ohio State is crowned the league’s champion. His conference will have completed a most unusual football season, one where matters like whether it was even safe to play at all became far more urgent than who won or lost.

But in the days after the game, Warren will retrain his attention on a conundrum nearly as daunting as playing a season during the coronavirus pandemic: what to do about the approximately $110 million worth of football games the Big Ten failed to deliver to its television partners.

Nobody expects a solution right away.

“You have to look at the relationship over the long haul,” Warren said in an interview this week. “You can’t just look at the season in 2020 and that certain content was not delivered the way it was written in the contract years before.”

Executives across American sports have been grappling with similar issues as games have been canceled and seasons truncated. The fates of television deals are particularly crucial in college sports, where athletic departments have warned of the possibility of financial ruin and schools in some leagues, including the Big Ten, have gone months without money from ticket sales.

Stocked with some of the biggest brands in sports, including Michigan, Ohio State and Penn State, the Big Ten earns more revenue — more than $781 million in its 2019 fiscal year — and distributes more money to its member schools than any other league in college athletics. Most of the money, an average of around $440 million each year through 2023, comes from its media rights agreements with Fox, ESPN and CBS.

And while college broadcasting contracts can cover a range of sports, ESPN and Fox are mostly paying the Big Ten for football games. Fox’s contract with the league ordinarily guarantees it between 24 and 27 games annually, as well as the championship matchup, while ESPN’s contract promises it 27 games. (The Big Ten’s agreement with CBS covers only basketball games.) But this season, because of reduced schedules and the cancellations of games because of the coronavirus pandemic, Fox will only show 16 games and the championship, while ESPN will show just 15.

In other words, the Big Ten owes its media partners at least 20 football games. They will have to make that up with money, even if it’s not clear how (or how much) they might pay.

According to four people familiar with the Big Ten’s television contracts, there is no specific value placed upon each football game, in large part because the contracts encompass more than just football. The people spoke about the deals on the condition of anonymity because they were not authorized to reveal specific details about the agreements.

For most conferences that are strongest in football compared with other sports, football games make up about 80 percent of the value of rights agreements, according to two of the people.

Eighty percent of the $190 million ESPN pays on average annually means that ESPN is paying around $152 million to show 27 games, which means that each regular season game is worth about $5.5 million each. The math for Fox yields a similar figure but is a bit more complicated because for the $240 million it pays on average annually, it also gets the championship game and the first pick each year of which games to broadcast.

That means Fox and ESPN would normally pay around $110 million for the 20 games the Big Ten did not deliver.

Those figures are broad outlines because individual games are not line items in the contract agreements. One university administrator at a Big Ten school, who spoke on the condition of anonymity, said the value of each game was better understood as a range, estimating between $4 million and $6 million apiece.

“We are missing games, as is the conference,” said Mark Silverman, the president of national networks at Fox Sports. “Obviously everyone is being financially impacted by this.”

There are no specific contractual mechanisms to resolve the missing games. That makes the situation difficult — but it also provides an opportunity to be creative.

“No contract could have ever addressed this Covid scenario,” Silverman said. “The term we have used quite a bit is that there is no playbook for what we are dealing with.”

But Warren, a lawyer by training who took over the Big Ten this year after working as a top executive in the N.F.L., said he had spent much of the recent months tending to the league’s broadcast partners. Health and safety issues dominate his days, Warren said. But relationships in the television industry follow close behind, and he traveled this year to California, Connecticut and New York to huddle with top broadcast executives.

“The way I have to look at it is we’re sitting on the same side of the table with our partners and not across from them,” Warren said, adding that “people didn’t throw their hands up and say, ‘We’ll see you in court.'”

The end of football season, once nobody needs to adjust week to week to whether games are happening at all, is expected to accelerate negotiations.

Warren declined to detail what the Big Ten might ultimately offer the TV networks to satisfy the league’s obligations. But industry experts said what the conference surrenders will almost assuredly be a combination of money and other considerations.

“It varies depending upon what is involved,” said Silverman, who has seen major alterations to Fox’s normal schedules with Major League Baseball, NASCAR, the Pac-12, Big 12 and Major League Soccer, among other leagues. He added: “Can you create more games, can you not? How long is this deal versus this other deal?”

Media agreements with professional sports leagues usually have language for how to deal with a strike or a lockout, and one-off game cancellations because of extreme weather or other unexpected events can be resolved over the course of the season. If the Big Ten had not played football this fall, like its university chancellors and presidents originally decided in August before reversing course in September, the contracts could have rolled over another year, expiring in 2024 instead of 2023

Instead, by playing a shortened season only within its conference this autumn, the Big Ten set up what could become a complex, high-stakes dance testing contract law, interpersonal relationships and business ties.

The outcome of the talks will reverberate throughout the league’s footprint, which is largely in the Midwest but reaches from Nebraska to New Jersey. Athletic teams across the country are being cut, and the N.C.A.A., stung by the cancellation of its national basketball tournaments in the spring, reduced its payout to conferences by hundreds of millions of dollars. State budget crunches because of the pandemic are sure to soon affect public colleges and universities, even those with self-sustaining athletic departments. Every dollar counts.

Ohio State’s athletic department, for example, earned $210.5 million in operating revenue during the 2018-19 school year, according to a financial report it submitted to the N.C.A.A. Ticket sales, its biggest source of revenue, generated almost $60 million and will shrink to close to nothing in 2020. It reported receiving almost no revenue from the state, university or student fees. Its second biggest source of revenue was media rights — an expansive category that includes television deals brokered by the Big Ten — which accounted for 22 percent of its budget, $45.6 million.

Television revenue, which the Big Ten distributes close to evenly to its member institutions, is even more important to the schools that aren’t traditional athletic powers. At Minnesota, for instance, media revenue accounted for 33 percent of the athletic department’s $130.5 million in operating revenue in 2018-19.

There are conspicuous benefits to leagues and media companies working out what to do about lost games without court fights.

The college sports industry, already under scrutiny from lawmakers and the courts, faces chronic perception issues over how much the industry has ballooned without commensurate boosts for athletes who are provided the cost of attendance.

And media powerhouses, including ESPN and Fox, are doling out many hundreds of millions because of the audience and advertisers that college sports attract. Those eyeballs and dollars could someday move elsewhere if relationships sour.

“What I think I promised myself in this was I wasn’t going to focus on who was the winner and the loser between us and our broadcast partners,” Warren said.

“This is not,” he had observed a few moments earlier, “going to be our last season.” 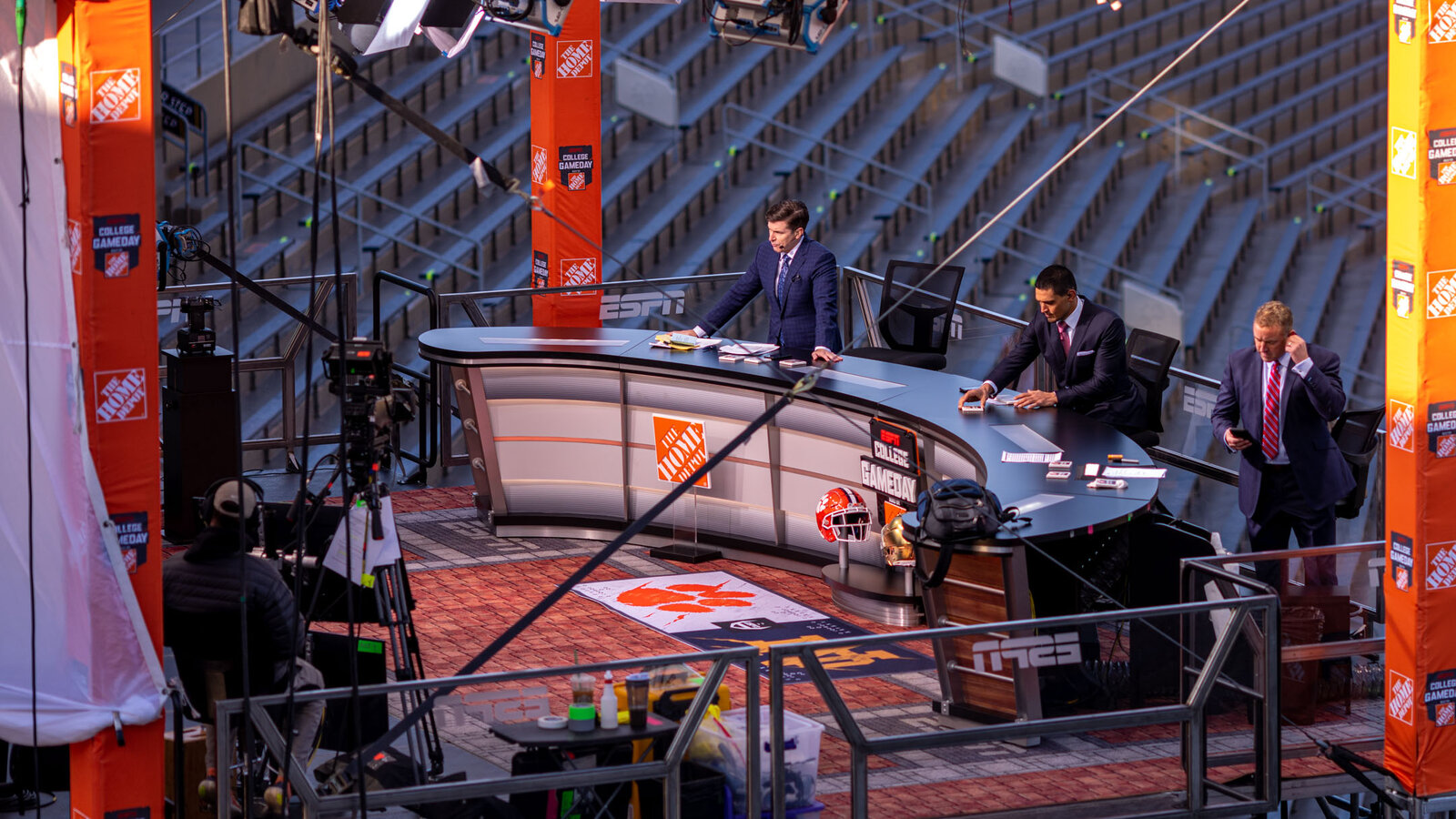