ORLANDO, Fla. — The kid, like others of his generation, had never seen Tiger Woods win a major. He had no clue how cool golf could be.

And then his father unexpectedly won the 2019 Masters. That’s when the game got a hold on Woods’s son, Charlie, 11, almost as soon as Woods swept him up in his arms behind Augusta National Golf Club’s 18th green.

“It was casual before then,” Woods’s caddie, Joe LaCava said, referring to Charlie’s interest in golf. “Now it’s intense — in a good way.”

Charlie Woods’s deeper embrace of golf has afforded the public a rare view this weekend of another side of his famous father, one that Tiger Woods usually chooses to keep out of sight of the prying public: the devoted dad.

Woods, 44, and his son will make their debut Saturday in the PNC Championship, a 36-hole best-ball format featuring 20 teams of prominent past champions and their family members. On a chilly Thursday at the Ritz-Carlton Golf Club at Grande Lakes, where the tournament is taking place, the Woodses warmed up with an 18-hole pro-am that was memorable for Charlie’s approach-shot darts and Woods’s paternal pride.

“It’s so much fun for me to see him enjoying the game,” Woods said. “That’s the whole idea. Enjoy hitting shots and creating those shots.”

Golf has come full circle for Woods, who forged a deep connection with his father, Earl, through the game. As Earl did with Tiger, Woods exposed Charlie to the game early. At 6, Charlie had a swing that Woods said he envied.

But Charlie is not a sawed-down version of Woods. Unlike his father, who competed in a putting contest with Bob Hope on “The Mike Douglas Show” when he was a toddler and had been profiled in Golf Digest and Ebony magazine by the time he was 6, Charlie has had a much more low-key childhood.

He dabbled in golf but initially seemed more interested, as is his older sister, Sam, in soccer. That was fine by Woods, who said Thursday, “Whatever he decides to do, as long as he has a passion for it, I’m happy.”

Until this week, his children have made infrequent appearances in the glare of his spotlight. Sam, 13, hadn’t planned on attending the final round of the 2019 Masters, showing up only after her club soccer team failed to advance to a tournament final scheduled for the same day, and Woods said that Charlie came only because his sister was there.

After he won, Woods said, they spent the short flight home fighting over who got to wear the green jacket. He was gratified by their enthusiasm.

Woods has spoken often of how he thought his children were reluctant to commit to golf because they associated the sport with the pain it has caused him, not just his physical struggles but perhaps also his arrest with painkillers in his system in 2017 after a risky back surgery. The operation had been undertaken, Woods said at the time, to improve his quality of life with his children, not prolong his career, which he thought was over.

Woods’s voice and expressions always soften when he speaks of his children. They are the one topic that can reliably engender a smile that reaches his eyes.

“So excited that we’re able to have these moments,” he said Thursday.

To watch Woods and his son on the golf course is to be granted a porthole into Woods’s parenting. Tournament officials have added forward tee boxes to accommodate Charlie, the youngest competitor in the tournament’s history. On the ninth hole, Woods stood behind Charlie, saying nothing until after he had hit an errant drive and looked imploringly at his father, who pointed out that the hitting strip was on a slight slope so he had to adjust his setup to account for that.

“My dad never coached me,” Woods said. “It was all about feels and being there, being present, being with me. He did that and I’m doing it the same way with Charlie.”

On the same hole, Woods’s son asked him why he had used his 9-iron for a 113-yard approach. Woods explained that it was cold and windy so he decided to go with that club and take a little off his swing.

Woods and his son played each nine with a different set of amateurs. At the ninth and 18th holes, Charlie took off his billed cap to shake hands with his playing partners. He was polite and attentive and seemed unfazed by all the adults, including a few with their small children in tow, who cheered his every shot.

“It’s so cool for me to see him enjoy the sport and feeling the shots and hitting it as solid as he is hitting it,” Woods said.

As the lead producer of NBC’s golf coverage, Tommy Roy has grown accustomed to seeing Woods on the 120 screens he monitors during a telecast. But playing the first nine Thursday in the same group as Woods, Roy saw him from a new angle.

Whether Woods was standing behind his son studying his form and the flight of his ball or leaning down to answer a question, the result was the same. Woods described them as “bonding moments.”

Rory McIlroy and Justin Thomas, younger stars who have gotten to know Woods well over the past few years, each described him as a great father. But until this week, people drawn to Woods, the performer, had no idea really what he looked like as a parent.

On every hole, after the group putted out, Woods stuck a tee in the ground and engaged Charlie in contests to see whose putt or chip came closest to it. On the 18th hole, as Woods and his son walked side by side down the fairway, pulling roughly two dozen spectators along, one man in the crowd turned to another and said, “I’m not even a big fan, but I’m enjoying this. It’s pretty cool.” 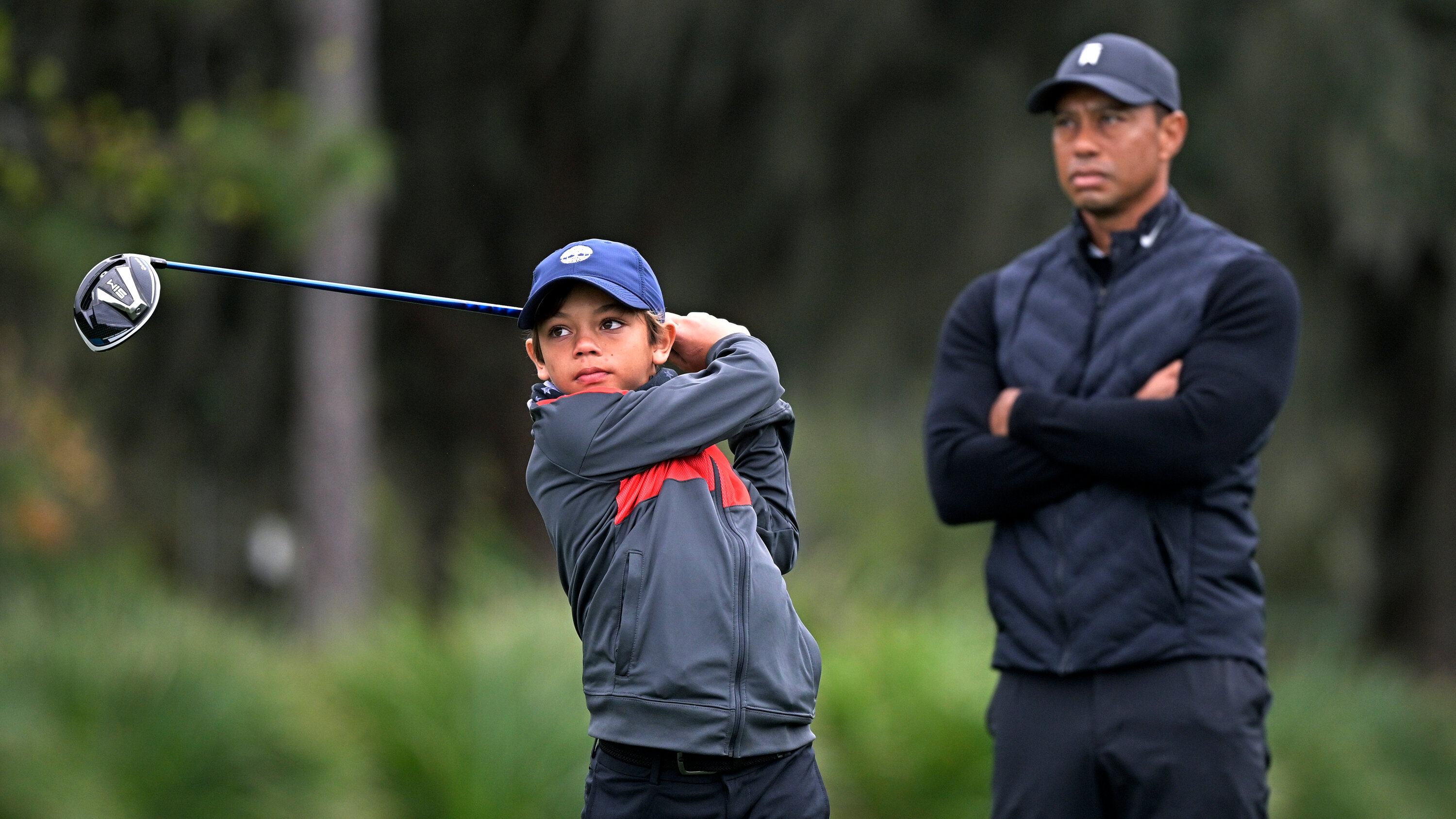