Home Sport A First for Sarah Fuller, but That Wasn't the Last of It
Sport

A First for Sarah Fuller, but That Wasn’t the Last of It

A first is always going to be noticed.

All of those accomplishments occurred this year, and were celebrated. But even some of the women who achieved them were conflicted over the attention they received.

“I do think it’s ridiculous, but, I mean, we’re appreciating the fact that allies are now opening these doors for people that have the power to present themselves,” said Bolden, who was added to the Los Angeles Kings’ scouting department in February. “There’s going to be a point where being a woman and a scout, or a coach or a general manager, won’t be like this ‘oh my gosh, can you believe it?'”

Fuller’s biggest headlines did not come in November when, as a goalkeeper, she led her Vanderbilt women’s soccer team to an upset of top-seeded Arkansas in the Southeastern Conference tournament final. Instead, they came six days later, after she appeared in a Vanderbilt football game. Then, last weekend, she became the first woman to score in a Power 5 football game, by kicking two extra points against Tennessee, adding to her pioneering resume.

Fuller went from 1,000 Instagram followers to over 250,000 within days. She became a national sensation.

“It’s like nothing I ever experienced,” she said. “I was pretty satisfied with an SEC championship, and I was helping out the football team.”

For some female athletes, though, the fact that Fuller’s soccer achievement was overshadowed by the football one underscored the idea that competing among and against men may not be, for the women involved, an achievement worthy of more attention than doing so with women.

“It’s like anything else as an athlete, you can’t let it bother you,” said April Goss, who was a kicker in Kent State’s football program from 2012 to 2015. “But it’s challenging, in a way, they don’t let you even feel how much you can do.”

A range of women have gotten notice when invited to participate against men; goaltender Manon Rheaume may be known more for her two preseason games with the Tampa Bay Lightning in the 1990s than she is for her own career in women’s hockey. Kendall Coyne Schofield, an Olympic gold medalist, broke into the mainstream when she was a last-minute replacement for an N.H.L. player in the fastest skater competition during the 2019 N.H.L. All-Star weekend.

They were touted as having broken glass ceilings, yet the scrutiny is sometimes withering.

Before scoring in a game last weekend, Fuller on Nov. 28 executed a squib kick to begin the second half of a 41-0 loss to Missouri. The game was notable because of Fuller’s presence, but the kick elicited a flood of negative responses on social media. A squib kick is not majestic, nor does it have a high arc; it is usually a short line drive that bounces around before a member of the receiving team can field it.

“If you had a male kicker from like, the men’s soccer team, brought in, and the coach asked him to kick it, there wouldn’t have been a controversy,” said Julie Harshbarger, who has kicked for several professional indoor football teams. “The people who don’t know what a squib kick is wouldn’t even care.”

Fuller said: “There’s always the hate comments, or whatever, but I was surprised at how much controversy it drew. I was like, I was supposed to kick it right there; I don’t know what the issue is. I think I did a great job.”

Fuller’s proximity to men, to some minds, meant she was responsible for representing an entire gender.

“It felt like she had to kick it out of the end zone to show she was the absolute best,” said Goss, who added that she felt pressure to be perfect while playing against men a half-decade before Fuller.

For Nakken, who was hired in January by the San Francisco Giants, the barriers to advancing in her chosen profession, perceived or real, did not go away merely because she had achieved a first. “You can only chip away at that,” she said.

Nakken starred as a softball player at Sacramento State. She pursued sports management, and her path led her to the Giants’ staff, an opportunity that pressure can sometimes obscure.

“There are days I have felt like, ‘Oh my God, there’s all this weight on my shoulders,'” Nakken said, adding: “Is there a guide? How do you do that? What does it mean for women? All these big questions, and what’s important is just people — females and males — see it happening.”

The rush to celebrate women’s firsts in men’s sports can also overshadow the hard work they put in to even be considered qualified for the chance to break a barrier.

“You want to do your best, and it’s not a guarantee; a lot of people want these spots, men or women,” said Kristi Toliver, a W.N.B.A. player with the Los Angeles Sparks who became the first Black female assistant coach in the N.B.A. when the Washington Wizards hired her in 2018. “It’s really sought after, so when you do it, you have to be prepared every day.”

Elizabeth Heaston Thompson, the first woman to score in a college football game, for Willamette in 1997, said she did not view herself as a trailblazer, then or now.

“I wasn’t trying to blaze a path forever, that’s just not my personality,” she said. “I think that the women who have played in traditionally men’s sports, I think I would tell you if you have the tools to do it, go for it. There’s no reason not to. Each athlete has their place, and if they have the tools to perform the job, in women’s sports or men’s sports, they can do it.”

Being “the first,” “the only,” “the other,” has not silenced the discourse around whether female athletes playing alongside men should be there at all.

Asked how she felt when a woman’s presence in a men’s sport was viewed as a publicity stunt, Goss said: “You have to always prove it’s not. Until it becomes commonplace, until it’s not a news story, I feel like that’s just going to happen.” 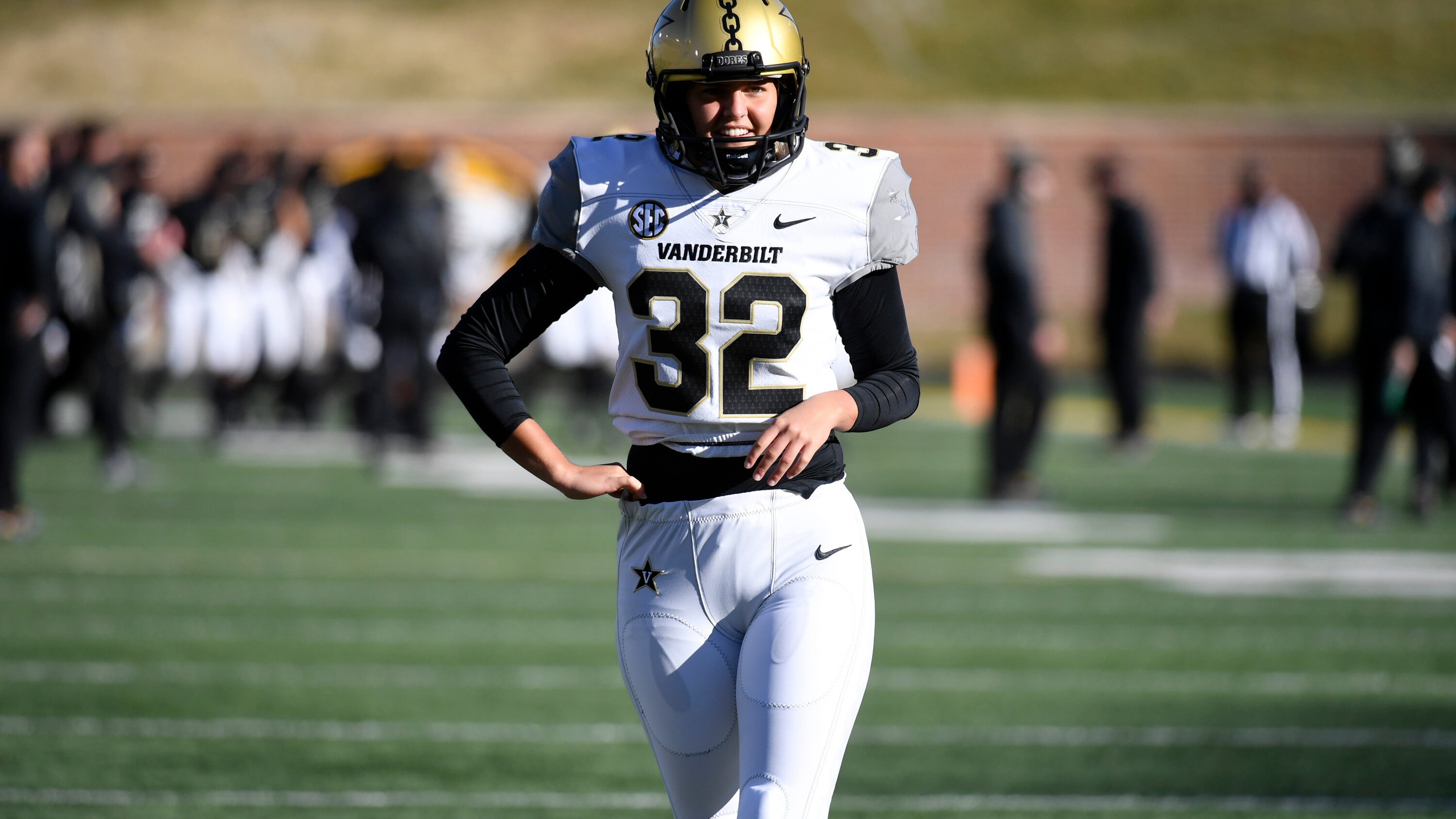