TORONTO — During the applause, the celebratory elbow bumps, the camera flashes, Colette Cameron watched through tears as four of her colleagues got jabbed Monday with the country’s first coronavirus vaccinations. Then she removed her suit jacket to follow them herself.

“It was overwhelming,” said Ms. Cameron, a registered nurse and social worker, who runs a nursing home in Toronto that experienced one of the city’s first outbreaks. “I wish everyone could have this support so nobody has to feel as alone as we did. We were desperate.”

The start of Canada’s vaccine campaign was an emotional one, with the first precious doses going to people from nursing homes: health care workers in Toronto, and residents in both Montreal and Quebec City.

That was recognition that nursing homes have been ground zero in Canada when it comes to both Covid-19’s cruel ravages and the storm of criticism over the country’s lack of preparation for it. More than 460,000 people have tested positive for the coronavirus in Canada, and 13,400 have died from it.

“We have never distributed so many Kleenex boxes as the last few days,” said Sue Graham-Nutter, chief executive officer of the Rekai Centres, which runs two nursing homes in Toronto tapped to receive the country’s first vaccinations. “We have the images of what happened on the floors.”

Less than a week after Canada became the third country in the world to approve the vaccine created by the American drugmaker Pfizer and a German firm, BioNTech, the first shipment arrived at a Montreal airport on Sunday night. From there, kicking off the country’s largest largest-ever inoculation program, the boxes of frozen vials were dispersed to 14 sites across most of the country that were equipped with special freezers for the vaccine, which needs to be kept at ultracold temperatures.

With a relatively small population of just 38 million, Canada has agreed to buy up to 76 million doses from Pfizer and 414 million doses of other potential vaccines from other companies. Anita Anand, Canada’s minister of public services and procurement, described that as “the most number of doses per capita of any country in the world” at a news conference Monday.

The first inoculations were a moment of triumph for the Canadian government, and it could not have come at a more welcome time: The virus is raging across the country in its second wave, and much of Canada is in lockdown.

By the end of August, 80 percent of Canada’s coronavirus deaths had been linked to nursing homes, among the highest rates in the world. At one point, the military was sent in to nursing homes in Ontario and Quebec to shore up staffing.

For a country that prides itself on socialized health care and a strong social safety net, those deaths have been cause for much anger and soul searching.

“When I got the call to go get the vaccine, I sobbed and sobbed,” said Samantha Hallgren, a registered nurse at Ottawa’s Perley and Rideau Veterans’ Health Centre, who was scheduled to get vaccinated on Tuesday.

She was both relieved and overwhelmed with bruising memories of the people she had watched die. She spoke of trying to offer comfort and love to patients denied more than one family visitor or a tender ungloved hand.

“You are not supposed to hug and touch,” Mrs. Hallgren said, recalling the death of a veteran she attended with a colleague. “But we just held him and the two of us cried.”

Few can really understand what the fight was like if they were not in the ring themselves, she said. “There’s been so much criticism of long-term-care homes — people don’t know what it’s like,” she said.

In late March, when there still little known about the coronavirus, an outbreak hit the first of the Rekai’s two homes, a block apart in the urban center of Toronto. A week later, cases emerged in the second home.

About a third of the 360 staff stopped showing up, according to Ms. Graham-Nutter.

One of her staff members spent nights calling hundreds of former interns, desperate for help to sustain the remaining workers who were doing double shifts and sleeping at a nearby hotel, so as not to infect their families.

“People were scared,” Ms. Graham-Nutter said. “We know what Covid-19 looks like, we’ve seen it, and it’s scary.”

Eventually, the city’s largest hospital network stepped in, sending some 75 nurses and doctors, including psychiatrists, to support Rekai staff members over a six-week period. Between the two nursing homes, 117 residents and 44 employees tested positive for the virus. Thirty-six residents died.

“This is such an emotional day,” Ms. Graham-Nutter said Monday, adding that she would never forget the call from the president of the University Health Network and his words: “I hear you need help.”

At other nursing homes, in Ontario and Quebec, the military was sent in during the virus’s first wave to handle basic duties like cleaning and delivering meals to residents.

A graphic report of what Canadian forces found at five Ontario homes shocked the public: patients left in soiled sheets or no sheets at all; untrained and overworked staff members feeding patients who were lying down or asleep, causing one person to choke to death; and rooms that were infested with ants and cockroaches.

Prime Minister Justin Trudeau called the report “deeply disturbing,” and in September, his government announced that it planned to both criminalize “those who neglect seniors under their care” and work with provincial governments to set national standards for nursing homes.

In Quebec, where the vaccinations were being administered at two different nursing homes on Monday, the first person to get the shot was 89-year-old Gisele Levesque, Premier Francois Legault announced on Twitter.

While Toronto, Montreal and Quebec City offered vaccinations first, other cities were set to follow quickly behind, mostly giving priority to workers in hospitals and nursing homes. Over the next few weeks, the country expects to receive a continual supply, and by March, have vaccinated some three million people, according to Dr. Howard Njoo, Canada’s deputy chief public health officer.

Mrs. Hallgren said she hoped the vaccine would allow her to hug her own mother, who suffers from dementia and was moved into an assisted-living apartment during the pandemic. She called the vaccine a “Christmas present.”

Her fellow nurse, Ms. Cameron, has hopes of seeing someone she has never met before: her first grandchild, whose birth was expected in New York City this week.

“That’s also what brought tears to my eyes,” she said. “It’s very special for me.” 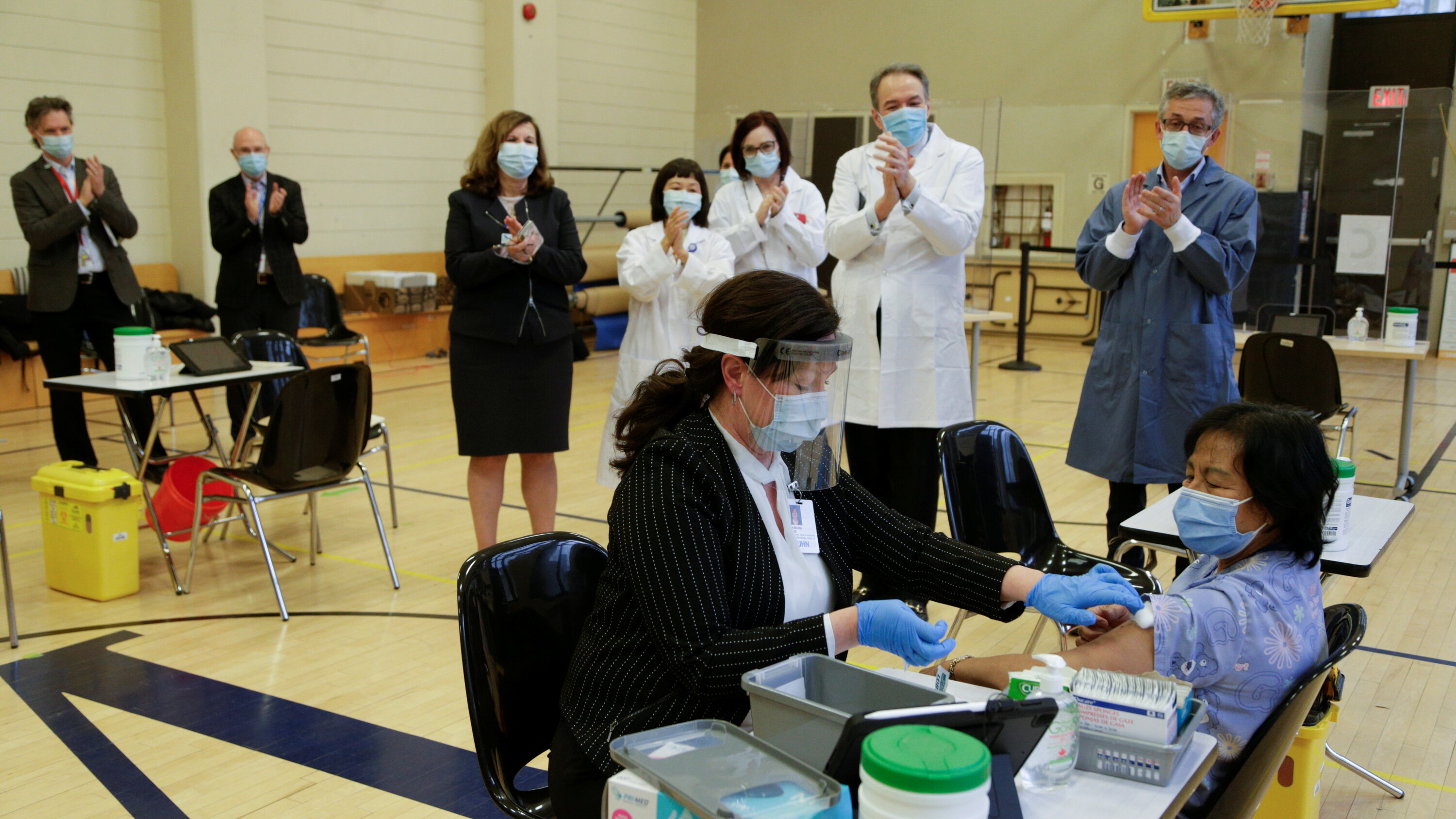