Home Sport Its Football Season Over, Cal Wonders: Was It Worth It?
Sport

Its Football Season Over, Cal Wonders: Was It Worth It?

Instead, after only four games, Cal’s season ended just the way it started — with back-to-back game cancellations linked to the coronavirus, and a lingering question:

Was that even worth the time, risk, energy and money?

“It wasn’t ideal, how it all went,” Coach Justin Wilcox said earlier this week, summing up a 1-3 season. “But I think it’s better than nothing.”

Across the country, college football teams have patched together seasons amid the coronavirus pandemic, culminating in this weekend’s conference-championship games.

Those big games come just as a surging number of Americans are dying of Covid-19 — more than 3,000 per day for much of the past week. Death rates have been higher in college towns, where thousands of cases have affected college sports teams and their wide communities.

But college sports rumble on. The championship games on Friday and Saturday are mostly made-for-television affairs that will help decide pairings for those bowl games not yet canceled (more than 10 have been called off, while some bowl-eligible teams are opting out of bowl season altogether) and for the four-team playoff planned for January to decide a national champion.

Cal is not part of any of that. A member of the Pac-12, Cal entered the football fray late and exited early.

Over the course of its shortened season, Cal announced only three coronavirus cases in its football program, far fewer than many of the teams playing this weekend and the handful vying for the national title. Yet it had four games canceled, mostly because of tighter local restrictions over contact tracing and opponents who found themselves in the same spot.

Other programs around the country played on through much bigger outbreaks. Top-ranked Alabama and No. 2 Notre Dame, for example, will each play its 11th game of the season this weekend, although Alabama Coach Nick Saban and the Crimson Tide’s athletic director, Greg Byrne, were among those in the program to test positive this fall, and Notre Dame had an early season outbreak in its locker room.

No. 3 Clemson, Notre Dame’s opponent in Saturday’s Atlantic Coast Conference championship, played two games without its star quarterback, Trevor Lawrence, after he tested positive. One of those games was the same weekend that Cal had a game canceled because it, too, had a single positive test.

The difference was that local health officials in California required the teammates of the Cal player to be placed in isolation, a game-canceling protocol that many other teams did not face. Lawrence, meanwhile, accompanied his team on its visit to Notre Dame, where his mask discipline on the sidelines raised questions during the national television broadcast. When Notre Dame won, the crowd stormed the field.

“The confusing and a bit of the frustrating part is that it’s not consistent throughout the state or certainly the country, and that’s why you see the differences,” Wilcox said. “I’m not saying I know what the right answer is, but I know that it’s not uniform on how that’s done.”

College sports do not have a commissioner or a centralized power structure beyond the N.C.A.A., which mostly provides a loose framework of rules and championship events for hundreds of universities playing in dozens of conferences.

The response to the pandemic in college sports has been an echo of the overall federal response — mainly, let local and regional powers figure it out.

During the summer, most big conferences decided to play football but not other fall sports, figuring that the immeasurable risk involved was worth the tangible dollars to be gained. Months later, it remains difficult to portray it as anything but a money grab.

The Pac-12 did not join in until the fall, and made plans for a seven-game season, without fans, only once it had a system for daily testing of athletes.

Testing was supposed to create order amid the chaos. It did not, because each positive test result required contact tracing, where concerns about possible spread were far less clear than a positive-versus-negative test result. Who was he with? When? How close? How long?

The objective was not to find a safer place to play. It was to find a place with fewer rules.

Cal never uprooted, but its efforts felt like a two-month balancing act. Cal never opened its locker rooms and held team meetings outdoors. It moved its weight room and training table outside, too, and required masks everywhere. It preached to players the importance of social distancing, for the good of the team.

Among the athletic teams that have been on campus since October, from football to several winter-sport teams, Cal has had 25 confirmed positives from more than 13,000 tests, the university said — a tiny positivity rate compared with the general population.

Two days before its season opener against Washington on Nov. 7, though, Cal announced the game was off because an undisclosed player had tested positive.

Because that player had been in proximity with others at his position, local health officials mandated isolation for all of them. Cal could not field a team that met the roster requirements from the Pac-12.

Cal’s next game was canceled, too, the day before the game, after Arizona State announced its own outbreak. But in a bit of twisted luck, another Pac-12 game was also canceled, leaving Cal and U.C.L.A to forge an impromptu meeting. Cal was wiped out, 34-10, at an empty Rose Bowl.

Two of every six Pac-12 games were canceled in a typical week, but Cal managed a string of three consecutive games. The Golden Bears lost close games at Oregon State and at home to rival Stanford by a combined five points.

Then Cal upset Oregon — which, with a 3-2 record and because of cases at Washington, got a late invitation to Friday’s Pac-12 title game against Southern California (5-0).

Feeling rejuvenated last weekend, Cal traveled to play Washington State. Everyone in the traveling party was tested before the flight, then again after dinner the night before the game, then again at the hotel on the morning of the game.

The team loaded into six buses, twice as many as usual to obey social-distancing guidelines. They were driving to the stadium when Athletic Director Jim Knowlton got a text message: Please come back into the hotel.

A player had tested positive. Cal’s medical officials did their work, tracing the players’ contacts.

Fairly quickly, it was determined that there would be no game. It was less than two hours before kickoff. Washington State was already warming up at the stadium.

Knowlton contacted the Pac-12. He called Cal’s chancellor. He looked out the window.

“Our entire football team, offense versus defense, is in this snowball fight, and they are having the best time,” Knowlton said. “And I thought, we just gave them heartbreaking news a half an hour ago. It just shows the resiliency of kids, the camaraderie that sports brings to teams, and all the second- and third-order effects.”

Once Cal was home in California, this weekend’s planned game against 0-5 Arizona was called off, too. Both teams had virus-isolation issues. And, really, what was the point?

It was a question that reasonably might have been asked all along.

“I absolutely think it was worth it,” Knowlton said of Cal’s four-game football season. “Being part of a team is special, the life lessons you learn are special, and what we were able to provide our young men during an abbreviated season was a little bit of special.”

Knowlton now has other issues requiring his attention: two basketball teams already a few games into seasons as the coronavirus rages; plans to get all other sports rebooted this winter and spring; an investigation into a Cal women’s soccer coach accused of abuse by former players; and an athletic-department budget shortfall of tens of millions of dollars caused by the coronavirus.

Playing a few more football games would have helped. That will have to wait until next year. 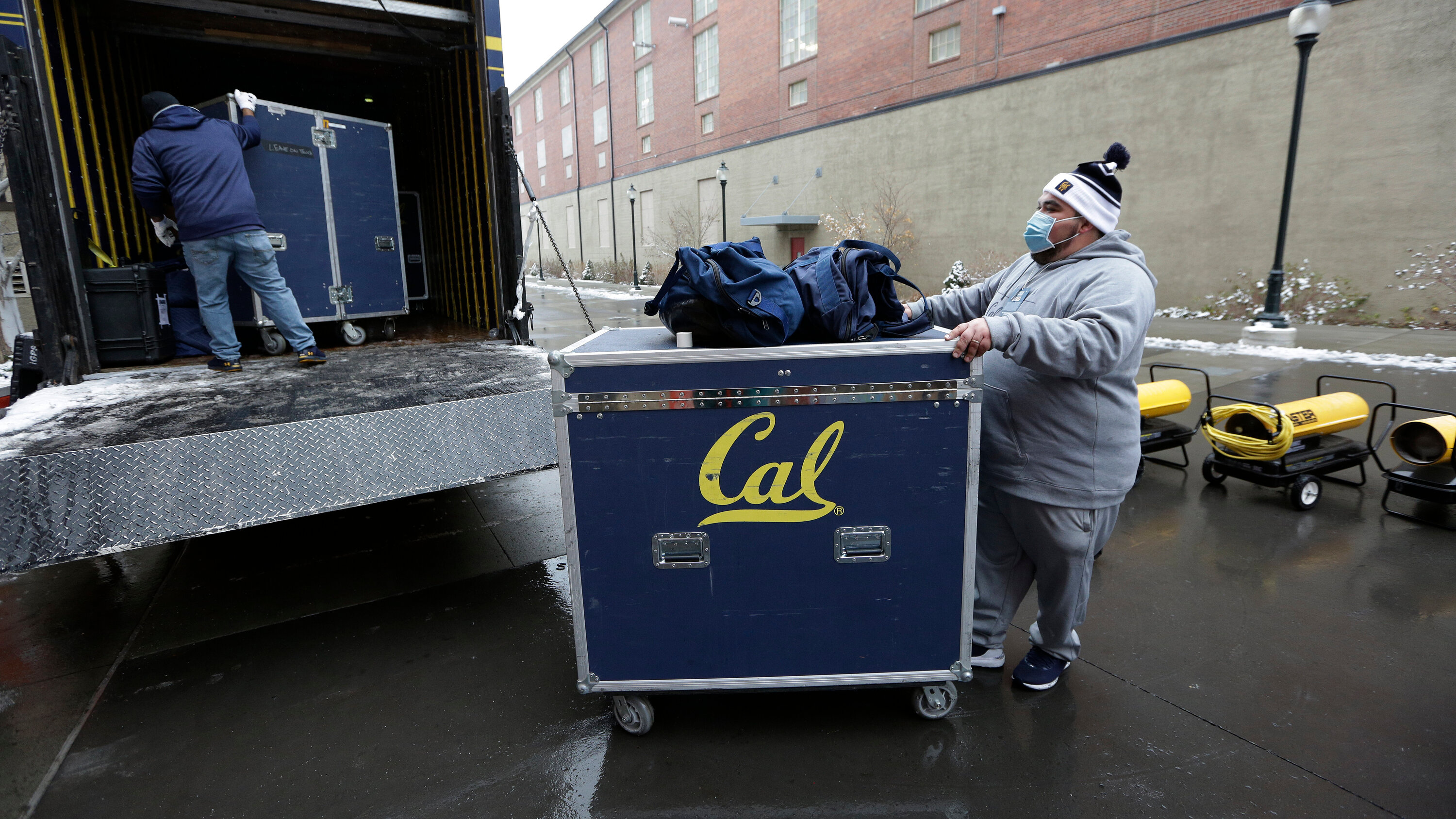