This article is part of Overlooked, a series of obituaries about remarkable people whose deaths, beginning in 1851, went unreported in The Times.

In the 1940s, Clarice Lispector, barely out of college, rocked the Brazilian literary establishment with the publication of her debut novel, “Perto do Coracao Selvagem” (“Near to the Wild Heart”). Critics lauded the jagged unpredictability of the book, which charted the stream-of-consciousness reflections of a young female protagonist determined to live freely in a world ordered by men.

The novel’s publication marked the beginning of a long public fascination with its author, particularly because she was a woman in Brazil’s male-dominated literary world. Even her name drew attention: Though she had lived in Brazil since infancy, she carried her surname from her birthplace, a hamlet in the Soviet Union. One influential critic called the name “strange and even unpleasant.” Others surmised that it was a pseudonym. And though Portuguese was her first language, a partial speech defect that flattened her R’s added an extra layer of mystery.

But nothing was more compelling about Clarice, as she came to be known among fans, than her words. She would publish eight more novels, 85 short stories, five books for children and countless letters and newspaper columns, cementing her reputation in Brazil and abroad as a writer of great, if cryptic, power.

“Lispector pushes Portuguese (and language itself, I would argue), to its limits,” Magdalena Edwards, the Chilean-born scholar and translator, wrote in an email. “She writes about people who are questioning themselves, their world, existence as such, and her use of language reflects this process.”

Lispector and her characters — women “on the verge of exaltation, greatness, dissolution, spiritual ecstasy,” the translator Katrina Dodson noted in a 2018 essay for The Believer magazine — have taken their place in the 20th-century Latin American literary canon and continue to enrapture new readers. And part of what draws them is at the heart of the question, Who is Clarice Lispector?

If the story of how Chaya Pinkhasovna Lispector, the daughter of poor Jewish immigrants, became Clarice, the glamorous and mysterious literary sensation, is worthy of a book, it is one she refused to write; she repeatedly deflected questions about her past in the few interviews she granted and bent the facts in the few autobiographical columns she wrote.

In one column, Lispector recalled visiting the Sphinx while on a trip to Egypt during World War II, writing: “I didn’t decipher her. But she didn’t decipher me either. She accepted me, I accepted her. Each one with her own mystery.”

She was born on Dec. 10, 1920, in Chechelnyk, in the Soviet Union (now part of western Ukraine), the youngest of three daughters of Mania and Pinkhas Lispector. Her family fled the anti-Semitic pogroms that spread across Eastern Europe after World War I and landed in Brazil, where Mania became Marieta, Pinkhas became Pedro and Chaya became Clarice.

Clarice’s childhood was marked by poverty and sorrow. When she was 10, her mother died of an unknown illness, and her father struggled to keep his family fed and clothed, moving them first to the coastal city of Recife and then to Rio de Janeiro in 1935.

By then, Clarice had started writing stories. She later reflected in a column that she was more interested in “sensation” than plot; one of her tales was “a story that never ended.” She submitted her writings to the children’s page of Recife’s main newspaper but all were rejected.

As a teenager she was transfixed by the novels of Dostoyevsky, Hermann Hesse and the Brazilian modernist Monteiro Lobato. In college — she was admitted to the University of Brazil’s law school after scoring fourth place on the national exam — she began to read the work of the Jewish mystical philosopher Baruch Spinoza, who became a lifelong influence.

Her first short story, “O Triunfo” (“Triumph”), was published in Pan magazine in 1940, the same year her father died of complications of a routine gall bladder surgery.

“Near to the Wild Heart” (1943), which is peppered with long Spinoza quotations, was an immediate sensation, winning prizes and drawing comparisons to James Joyce — an author Lispector had not yet read — and other modernists. In a newspaper review, the poet Ledo Ivo called the book “the greatest novel a woman has ever written in the Portuguese language.” “Hurricane Clarice,” declared the writer Francisco de Assis Barbosa on reading the book.

Amid the attention Lispector left Brazil, having graduated from law school in 1944 and marrying a classmate, Maury Gurgel Valente, who became a diplomat. She spent the next 15 years moving across Europe and to Washington with him. The couple had two sons, Pedro and Paulo.

Far from Brazil, Lispector fell into obscurity, though she continued to write, producing the linguistically complex novels “O Lustre” (“The Chandelier)” in 1946 and “A Cidade Sitiada” (“The Besieged City”) in 1949.

She and her husband separated in 1959, and she returned to Rio de Janeiro, where she rented an apartment in the chic seaside neighborhood of Leme and took up writing newspaper columns, occasionally under pseudonyms. Helen Palmer, for instance, offered cosmetic and life advice. (Lispector was secretly paid by Pond’s, the American beauty brand, according to Benjamin Moser, whose 2009 biography of Lispector, “Why This World,” spurred a new round of English translations and fascination with her work outside Brazil.)

Lispector soon returned to fame under her own name. Her collection of short stories, “Lacos de Familia” (“Family Ties”), published in 1960, was a best seller in Brazil. The 1961 novel “A Maca No Escuro” (“Apple in the Dark”), which was told from the point of view of a man who had just killed his wife, was translated into English by the renowned Gregory Rabassa and published by Alfred A. Knopf in 1967.

Rabassa recalled in a memoir that Lispector “looked like Marlene Dietrich and wrote like Virginia Woolf”– a comment Lispector found sexist, though it was echoed by many of her male critics and admirers.

“I don’t like when they say that I have an affinity with Virginia Woolf,” Lispector wrote in one column, adding that she had encountered Woolf’s work only after her own first novel was published. “I don’t want to forgive her for committing suicide. The terrible duty is to go to the end.”

A burst of creativity followed in her later years, including what is considered her masterpiece, “O Paixao Segundo G.H.” (“The Passion According to G.H.”), published in 1964. In the novel, a nameless woman recounts entering her maid’s empty bedroom, where she finds little more than a mysterious drawing and a single cockroach.

“It’s changed everything I’ve written since reading it,” Idra Novey, who translated the book for New Directions in 2012, said in a phone interview. “I felt this urgency to continue the questions that drive that novel, having seen them in the deepest way as a translator.”

A fire in Lispector’s apartment in 1966 nearly killed her, and an increased dependence on sleeping pills made her behavior increasingly erratic. She denounced the press for portraying her as eccentric — as a “sacred monster,” as she put it. And yet she helped secure that reputation when she accepted an invitation in 1975 to appear at the First World Congress of Sorcery in Colombia.

“Be careful with Clarice,” the Brazilian author Otto Lara Resende wrote in a letter to Claire Varin, a French Canadian researcher who began writing about Lispector in the 1980s. “It’s not literature. It’s witchcraft.”

Still, she continued to receive admiring letters from readers across Brazil.

“When I don’t write,” Lispector told an interviewer in her sole television appearance, in 1977, “I am dead.” When the interviewer proposed that the author could be reborn in a new book, Lispector demurred, saying: “For the moment I’m dead. I’m speaking from my tomb.”

Later that year, she suffered a hemorrhage and was said to have confronted a nurse in a Rio de Janeiro hospital, yelling, “You killed my character!” She died on Dec. 9, 1977, at 56.

When she was about 42, Lispector went to Warsaw — the closest she had come to her birthplace since her infancy. She recounted the trip in a newspaper column nearly a decade later. As she stood alone on a balcony, “a large black forest movingly pointed the way to Ukraine,” she wrote. “I felt the plea. But I belong to Brazil.” 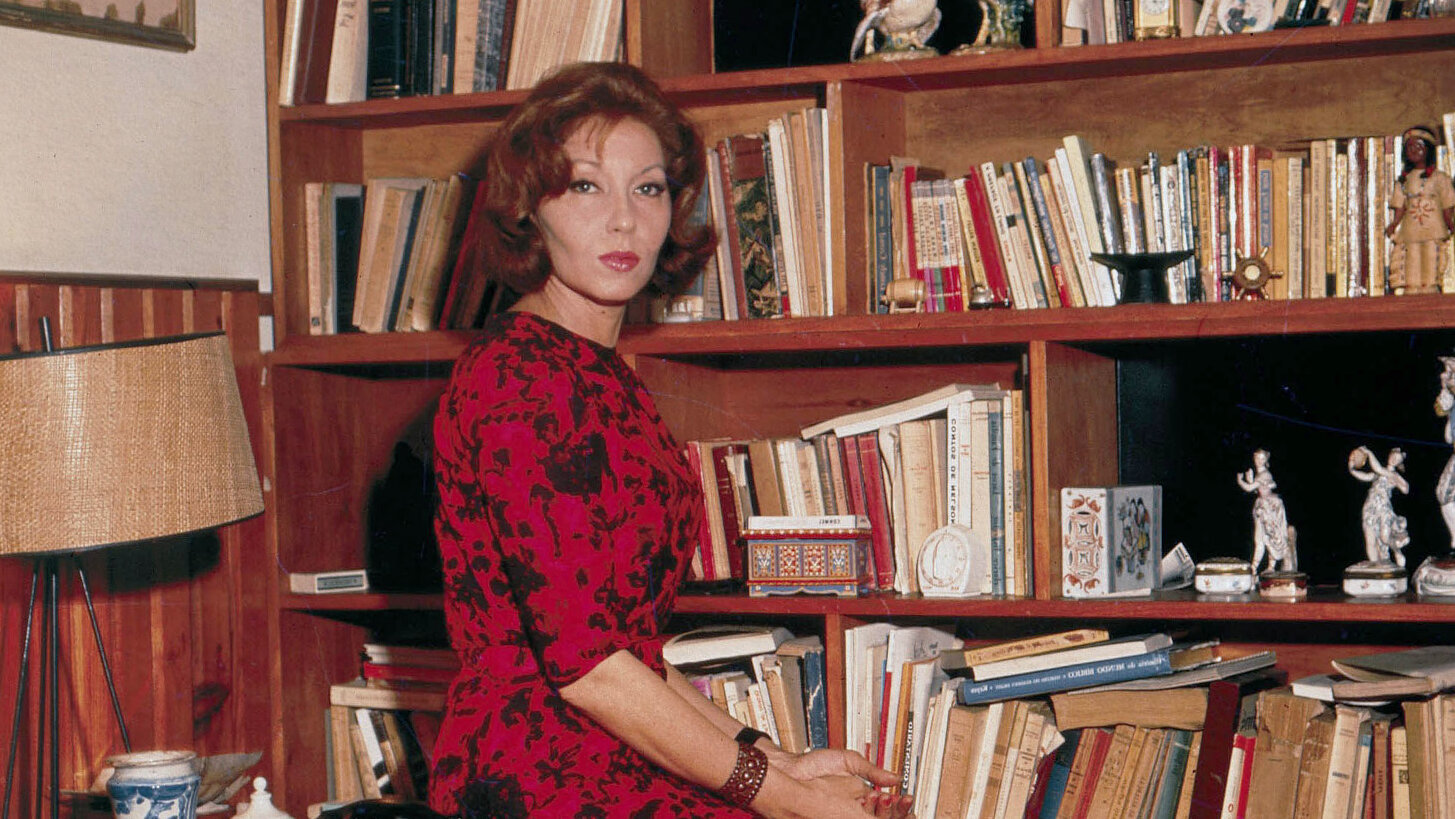 Facebook
Twitter
Pinterest
WhatsApp
Previous articleAn Ex-Governor Is Gunned Down, Punctuating a Deadly Year for Mexico
Next article‘Break It All’ Celebrates the Oppositional Energy of Latin Rock