RIO DE JANEIRO — As countries rushed their preparations to inoculate citizens against the coronavirus, Brazil, with its world-renowned immunization program and a robust pharmaceutical manufacturing capacity, should have been at a significant advantage.

But political infighting, haphazard planning and a nascent anti-vaccine movement have left the nation, which has suffered the pandemic’s second-largest death toll, without a clear vaccination program. Its citizens now have no sense of when they may get relief from a virus that has brought the public health system to its knees and crushed the economy.

Experts had held out hope that Brazil’s immunization prowess might allow it to handle the end of the pandemic better than it handled the beginning.

Soon after Covid-19 was first identified in the country in February, Brazil became an epicenter of the global health crisis. President Jair Bolsonaro dismissed scientific evidence, called the virus a “measly” cold that did not warrant shutting down the region’s largest economy, and berated governors who imposed quarantine measures and business closures.

As vaccination efforts get underway in Britain and the United States, giving their populations a chance to begin to imagine a post-pandemic life, the moment found Brazilian officials once again unprepared and mired in loud disputes over vaccine politics.

The health ministry last week presented a vaccination plan in response to an order from the Supreme Court. The plan established the order in which vulnerable groups would be vaccinated, but lacked a detailed timeline and a clear estimate of how many doses will be available. The ministry had previously said it intended to start the vaccination campaign in March.

Days after the announcement, the health ministry was still scrambling to place orders with overextended vaccine suppliers. Officials at the ministry also faced questions over why the country did not have enough syringes and vials on hand to embark on the ambitious vaccination campaign, necessary to cover a country with 210 million residents, where more than 180,000 have succumbed to the virus.

On top of that, Anvisa, Brazil’s health regulatory agency, has yet to approve any coronavirus vaccine for general use.

“People are going to start to panic if Brazil continues to lag behind in having a plan, a clear and objective strategy,” Rodrigo Maia, the speaker of the House, said on Dec. 7, warning that Congress would take the reins of the process if the executive branch continued to fumble.

The discussion of vaccine access and safety has also become mired in a partisan dispute.

Mr. Bolsonaro has repeatedly maligned the CoronaVac vaccine, which is being developed by the Chinese firm Sinovac Biotech, and nixed his health ministry’s plan to purchase 46 million doses.

Instead, the government placed its faith in the vaccine developed by AstraZeneca and Oxford University, which is lagging in the race to receive approval from health regulators.

The president’s crusade against the Chinese vaccine created a golden political opportunity for one of his chief political rivals, Joao Doria, the governor of Sao Paulo state. Mr. Doria negotiated directly with the Chinese for doses of the vaccine, which is being developed in partnership with the Sao Paulo-based Butantan research center.

Mr. Doria said state officials could not wait for the federal government, which has cycled through three health ministers over the course of the pandemic, to get its act together.

“We can’t wait until March to start using a vaccine that can be used in January,” he said in an interview. “There’s a consensus in the state of Sao Paulo and other states that waiting poses a big risk for the population, affecting mortality rates and the public health care system.”

Mr. Doria promised his constituents last week that Sao Paulo intended to start vaccinating people in late January — a pledge contingent on obtaining approval from federal regulators, who have yet to receive the final results of studies of the vaccine’s efficacy and safety.

The increasingly bitter spat between Mr. Doria, who is widely expected to run for president in 2022, and the federal government has dangerously politicized vaccination plans in Brazil.

Carla Domingues, an epidemiologist who ran Brazil’s immunization program until last year, lamented that the coronavirus vaccine had become a partisan issue.

“That has never happened in immunization efforts,” she said. “This is going to leave people confused. It’s surreal.”

As the number of cases shot up again this month, leaving hospitals in several cities running low on beds for critically ill patients, pressure mounted on the federal government from increasingly worried regional authorities.

Several governors converged in the capital, Brasilia, last week to meet with the health minister and demand a national immunization plan. A group representing city governments, the National Federation of Municipalities, also issued a statement asking the federal government to buy and distribute “all vaccines recognized as effective and safe against Covid-19.”

Some governors, including in the southern state of Parana and northeastern state of Bahia, began trying to procure, and ultimately produce, doses of the Russian-made Sputnik V vaccine.

Carlos Lula, the president of the national council of health secretaries, said the flurry of state-level vaccine diplomacy and deal-making was surprising in a country that has spent decades building one of the most well-respected immunization programs in the developing world.

“It’s a source of pride for the country because it became a model for other nations,” he said. “Yet suddenly, we can’t handle the tasks that are the bare minimum.”

Even when supply and logistical challenges are overcome, health experts say Brazil will face a new problem: a rising anti-vaccination movement that they say the president and his allies have fueled with falsehoods.

Roberto Jefferson, a former congressman who is a vocal supporter of the president, claimed early this month in a message on Twitter that “globalists were preparing a vaccine to change our DNA.”

The message, which was retweeted more than 3,000 times, claimed that Bill Gates, the American billionaire and philanthropist, was behind a “genocidal” scheme to “kill millions of people and replace our DNA with the mark of the beast,” a reference to the devil.

Bia Kicis, a lawmaker who is one of Mr. Bolsonaro’s top surrogates, argued that the coronavirus vaccinations should not be mandatory because they are “experimental” and could alter people’s DNA. Vaccine experts called the assertions baseless.

Mr. Bolsonaro has said vaccines should be mandatory only for dogs.

While vaccines have never been mandatory for adults in Brazil, their efficacy and safety has never been widely questioned.

A poll released over the weekend by Datafolha, a well-respected Brazilian public opinion firm, found that 22 percent of respondents said they did not intend to get the coronavirus vaccine, up from 9 percent in August.

The issue is now before the Supreme Court, which this month is hearing two cases that could give health officials the authority to make certain vaccines mandatory.

Dr. Garrett of the Sabin institute studied the rise of the anti-vaccination movement in the United States, where she worked for two decades at the Centers for Disease Control. She said she long feared the movement would find a foothold in Brazil, but she has been dismayed by the speed and intensity of its rise in the Bolsonaro era.

“It emboldened the anti-vaxxers in Brazil to come out sooner than they would have,” she said. “They’re empowered and have a loud voice.” 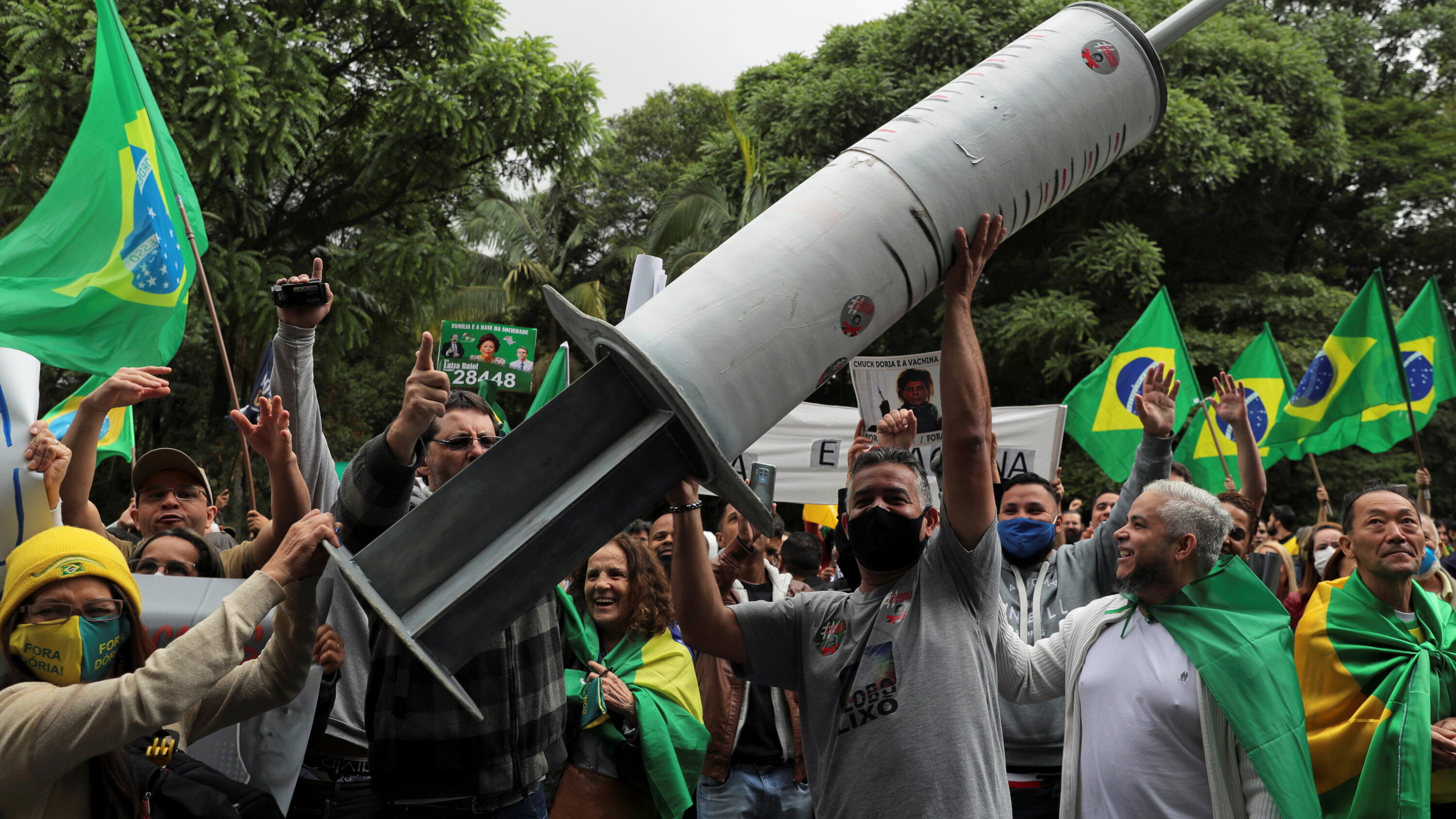