A Wolf Pup Mummy From the Ancient Arctic

More than 50,000 years ago, a den in sandy soil collapsed on a wolf pup and killed her, sealing her away from air and moisture so the pup’s body mummified in the cold.

She stayed buried in permafrost until four years ago, when the work of global warming and the explorations of a gold miner uncovered her in Canada’s Yukon Territory near Dawson City.

He wanted a precious metal; what he found was paleontological gold.

That mummy is now on display at the Yukon Beringia Interpretive Center in Whitehorse — body and fur intact, lips shrunken back so her teeth are visible in what looks a bit like a snarl. The puppy is so well preserved that it is easy to tell from visual observation that she is female.

She also has a name, Zhur (meaning wolf) in the language of the Tr’ondek Hwech’in people, in whose ancestral land the wolf was buried.

Among fossil animals, Zhur is “basically the best preserved wolf that’s ever been found,” said Julie Meachen, a paleontologist and professor of anatomy at Des Moines University in Iowa, who led a team of specialists in using noninvasive techniques, including DNA, biochemistry and bone structure, to study everything that could be learned about the ancient wolf pup. She and her colleagues published the results Monday in Current Biology.

Angela Perri, an archaeologist at Durham University in England, who was not involved in the study, but has collaborated with Dr. Meachen on other projects, said the study of the pup was an example of how scientists have become able in recent years to reach back into deep time and paint a vivid and detailed picture of an individual animal.

The researchers, she said, were able to ask not just, “What were Arctic wolves like?” but “What was the life of this wolf?”

The first stroke of luck, said Dr. Meachen, was the discovery, and the preservation of the pup. Because of climate change, the permafrost in the Yukon is melting, as it is around the world. In Siberia as well, warming has exposed troves of valuable fossils.

The miner who found the mummified pup, Neil Loveless, notified Grant Zazula, a paleontologist with the Yukon territorial government, who contacted Dr. Meachen. She and Dr. Zazula put together an interdisciplinary team of Canadian and U.S. scientists to study Zhur.

Using a variety of methods, such as carbon dating, DNA studies of the evolutionary age of the fossil and chemical studies of the oxygen levels in the specimen, they zeroed in on the time Zhur lived, some 56,000 to 57,000 years ago. It was a mild period in an ice age called an interstadial, when temperatures were warm enough for there to be flowing rivers and streams in the area.

By looking at X-rays of the bones and the development of teeth in Zhur, they knew she was between 6 and 7 weeks old at the time of her death. She was in good health and well nourished, and the soil in which the den was dug was sandy, and therefore unstable, so the researchers concluded that she most likely died when the den collapsed. The fate of her probable littermates, mother and the rest of the pack is a mystery.

Studying her DNA showed she was an arctic wolf of the Pleistocene, the same species as today’s gray wolves, but not a direct ancestor. Just as humans came from Eurasia in multiple waves, so did wolves.

Her world was one of large herbivores and other carnivores, many of them gone, such as saber-toothed cats, cave bears and American lions. Wolves of this time did prey on large mammals like caribou, but a look at the chemicals preserved in Zhur’s bones showed that her diet was heavy on creatures from the sea, most likely salmon.

There are wolves today that live on salmon at certain times of the year, when the fish are swimming rivers and streams to spawn.

Once the coronavirus pandemic is over, you can travel to Whitehorse to see Zhur in person, but for an early glimpse, the interpretive center will have a Facebook live event Monday, Dec. 21, at 3 p.m. Eastern, with the team of experts who studied the fossil appearing from their locations. 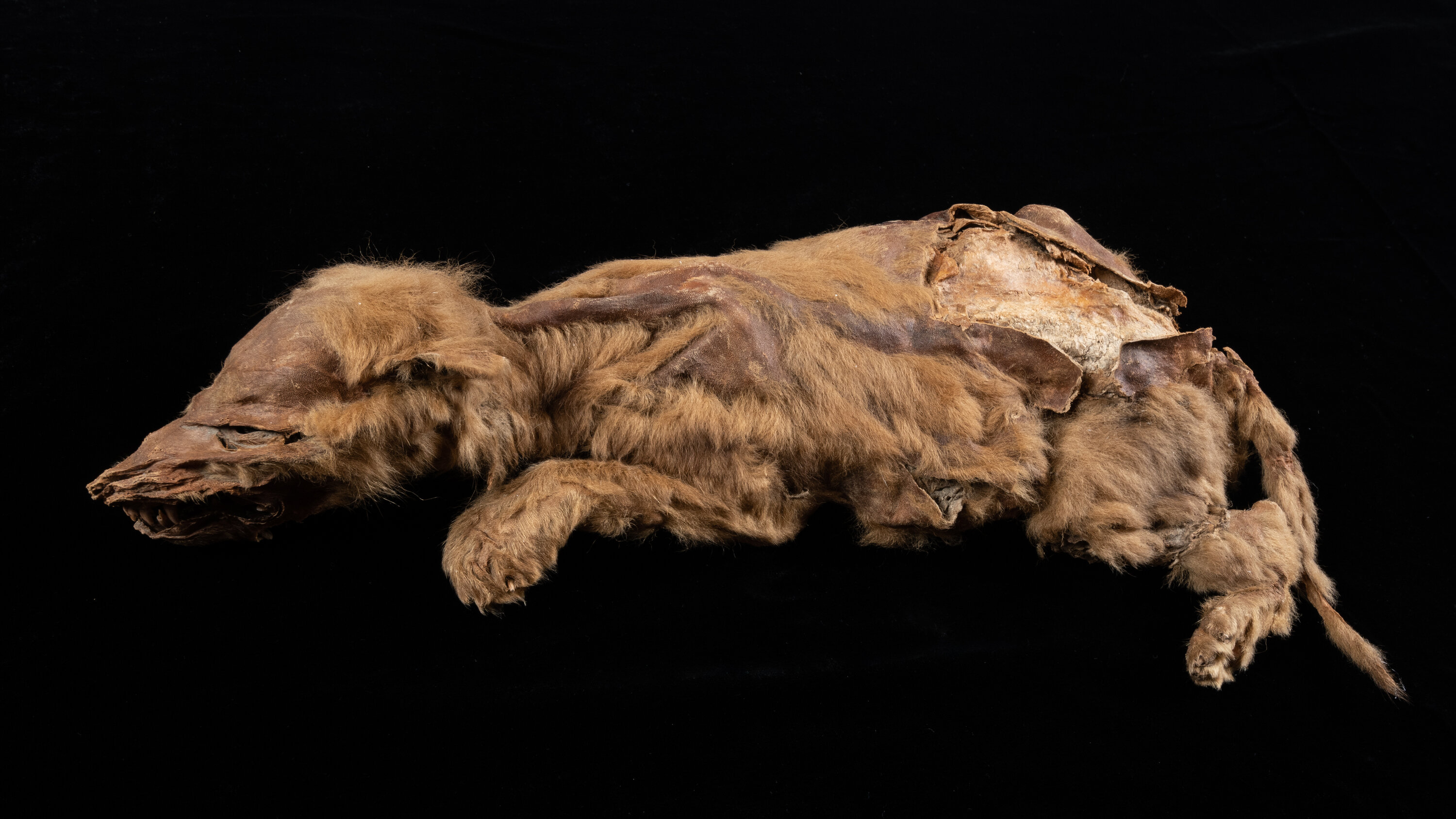