Runners’ Races Were Canceled. Their Coaches Filled the Void.

There were three winners at Sunday’s Marathon Project, a bright spot in an otherwise uncertain year for professional runners.

Sara Hall, racing just 11 weeks after her second-place finish at the London Marathon, won the women’s race in 2 hours, 20 minutes and 32 seconds, a personal best and the second-fastest time ever run by an American woman.

Martin Hehir, a fourth-year medical student who was coming off weeks of treating Covid-19 patients in an intensive care unit in Philadelphia, ran the race of his life in 2 hours, 8 minutes and 59 seconds, also a personal best.

But perhaps the biggest winners were the organizers themselves, coaches and agents who pulled off a world-class marathon in a year lacking racing opportunities.

Runners were suffering amid the uncertainty, said Josh Cox, an agent to many professional runners. “I served as part agent, part therapist for my athletes this year.”

Ben Rosario, head coach of Northern Arizona Elite, a professional training group based in Flagstaff, said some of his runners were feeling low. “Athletes need to perform,” he said. “When you take away the race piece, training is no longer fun.”

So four months ago, Cox and Rosario began conceptualizing an elite-only marathon that would include a first-class, record-eligible course.

Rosario initially envisioned holding the race on a motor racetrack, but Matt Helbig of Big River Race Management pointed him to a road he had been studying on the Gila River Indian Community. “We rode the course in a golf cart and I called Matt and Josh and said, ‘This the place,'” Rosario said.

The road was flat with no potholes and few turns. David Katz, a course measuring expert, spent the days before the race making the turns on the 4.26-mile circuit more gradual and therefore faster. Katz wanted to be on site to place the mile and kilometer markers himself, and he even marked the first hundred meters for the pacesetters.

The safety precautions mirrored those seen in other athletic facilities. Everyone on site — including the 40 women and 48 men racing — had to submit negative coronavirus tests. The pre-race news conference and technical meeting were held through video calls, with athletes logging in from their respective hotel rooms. Course monitors wore masks, and volunteers handling the athletes’ water bottles wore masks and gloves. Some runners were masked as they warmed up among the cactuses and shrubs.

While the prize purse was minimal — $5,000 for first place, $2,000 for second, $1,000 for third — time bonuses, contract obligations and Olympic spots for the Canadian and Mexican athletes were on the line.

Runner took risks from the gun. It’s 2020, after all. There was nothing to lose.

Twelve women ran under 2:30 and seven men finished faster than 2:10 — the first time that’s happened in U.S. history, reshuffling the American career lists for both men and women.

Hall, 37, had requested a pace group aimed at taking down Deena Kastor’s American record of 2:19:36. She held on for the win, missing the record by 56 seconds, but became the second-fastest American female marathoner at 2:20:32. Keira D’Amato, who came into the race with the American record in the 10-mile, landed a second-place finish in 2:22:56, setting a personal best time by 11 minutes.

A large group of men went out on a 2:09 pace, including the eventual winner Hehir, followed by a chase pack aimed at 2:11, just under the men’s Olympic standard of 2:11:30.

Hehir, 28, tucked into the back of the pack, letting the pacers do the work as he tried to burn as little energy as possible. Hehir moved to the front through miles 20 and 22 and took the lead when the pacers dropped off. He crossed the finish in 2:08:59, a personal best by two and half minutes.

“This race was really a validation of my whole running career,” said Hehir, who took sixth at the U.S. Olympic marathon trials in February.

To be able to race safely amid the pandemic was a gift, he said. While his wife and two young daughters fed his spirits in the evenings, his training runs fired him up in the early mornings, keeping him afloat at the hospital as the coronavirus continued to surge.

“The organizers deserve a standing ovation,” Hehir said. “Josh and Ben knew exactly what we athletes needed. They thought through every detail. It was a real testament to the sport, to see it go from being really knocked down, to seeing this grass-root, bottom-up effort done so the sport could advance.” 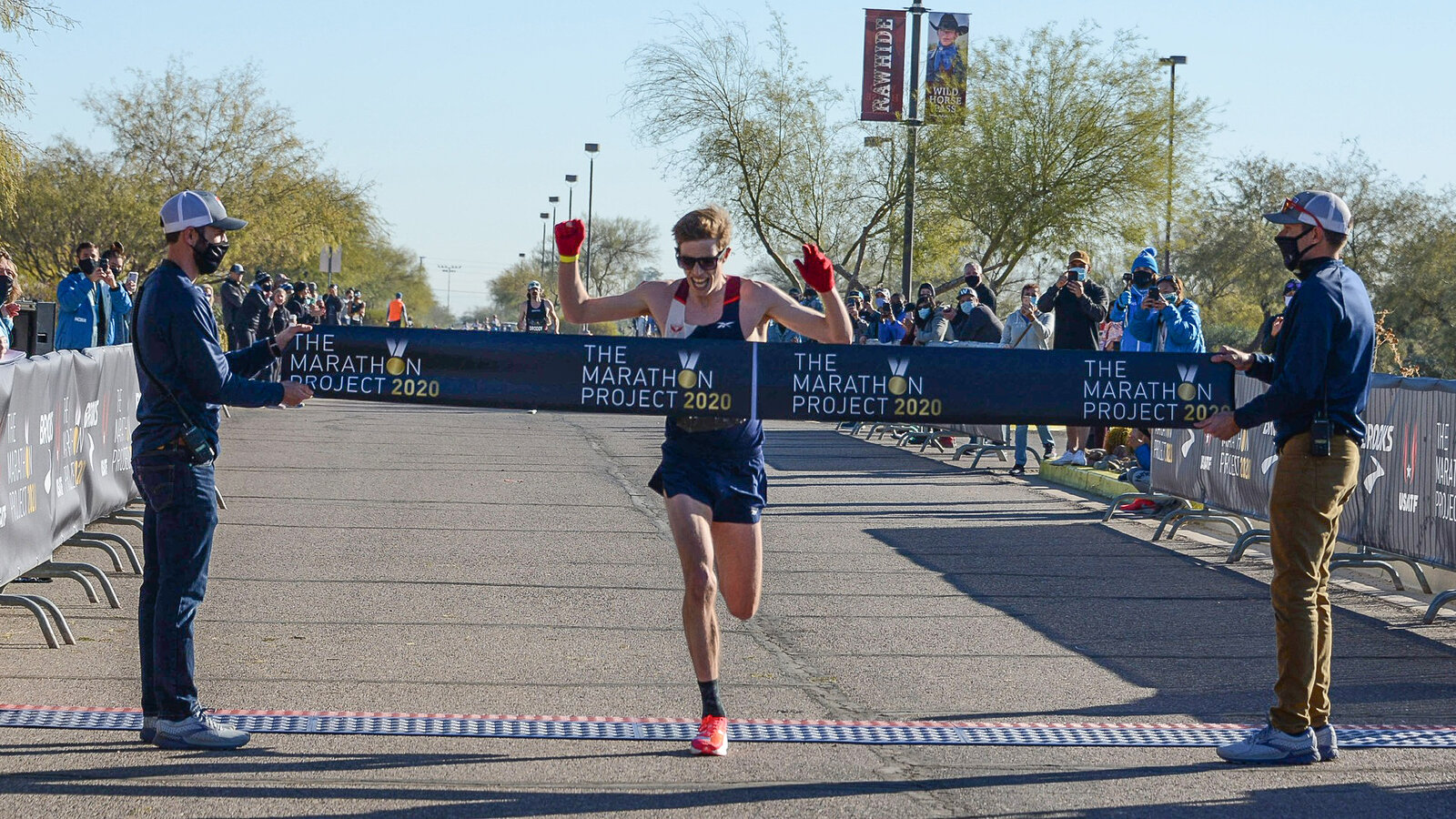