To an exclusive cohort in the N.F.L., the regular season serves as a preamble, offering those powerful teams 16 opportunities to tinker, learn and adapt. What might work in September might not in January, when the playoffs beckon.

All the while, at every checkpoint but one the Kansas City Chiefs have flashed their credentials and scanned their irises. They have beaten lesser opponents and overwhelmed good ones. They have outlasted legendary quarterbacks and thwarted ferocious defenses.

That happened again on Sunday, when in a potential Super Bowl preview the Chiefs defeated the Saints, 32-29, in New Orleans, a victory that flaunted their toughness and survival skills. Facing their best competition of the season, the Chiefs blew a 14-point lead, went up by 14, then outlasted New Orleans with a lethal running attack to spoil Drew Brees’s return from injured reserve.

The last six games have tested Kansas City (13-1) to a considerable degree, exposing flaws while revealing what must be, for the rest of the league, an uncomfortable truth. The Chiefs won all six, coming back in four of them — including avenging their lone loss, to Las Vegas — and though they do not seem invincible, they hardly seem beatable.

Even with the Saints swarming Patrick Mahomes as they did, sacking him four times and forcing a lost fumble, he still threw for three touchdowns, the Chiefs still gained 411 yards, they still scored on their first four red-zone opportunities and they still managed 32 points against what could be the league’s best defense.

The play that will linger longest was Mahomes’s third-quarter touchdown to Mecole Hardman, the score that shoved them ahead to stay. Mahomes rolled left, pump-faked and, with a defender barreling in from his right, flicked the ball toward the back of the end zone. It sailed beyond the outstretched arms of Sammy Watkins and into those of Hardman, who dragged his feet in bounds, putting the Chiefs ahead, 21-15.

The Saints (10-4), like Kansas City, occupy rarefied space among the league’s elite teams, and their defense was one of only two in the league that entered Sunday having allowed fewer than 300 yards per game. They dared the Chiefs to run, and so Le’Veon Bell and Clyde Edwards-Helaire did. Bell and Edwards-Helaire — who left in the fourth quarter with a leg injury — combined to rush 20 times for 90 yards and a touchdown, with Bell scoring off an option pitch from Mahomes in the second half.

Playing for the first time since Nov. 15, and without the elite receiver Michael Thomas, Brees completed only 15 of 34 passes for 234 yards, with three touchdowns and an interception.

Brees missed four games with 11 fractured ribs and a punctured lung, injuries that, presumably, made it difficult to breathe, eat, drink, sleep, sit and stand, let alone outwit the large men with bad intentions chasing him. Enticed by the prospect of facing the Chiefs, of dueling with Mahomes, Brees felt well enough to play. He slipped a protective shirt beneath his jersey and set about resuming his playoff preparation.

Early on, his passes floated and wobbled, and his fourth of six straight incompletions to begin the game landed in the hands of the Chiefs rookie L’Jarius Sneed. Capitalizing on the takeaway, Kansas City scored seven plays later, on a 5-yard pass from Mahomes to Tyreek Hill, who fooled the Saints by motioning away from the play before reversing field to slip unnoticed into the end zone.

It is ruthless, Kansas City’s combination of speed, offensive creativity and coaching acumen. Also, endless. On their next scoring drive, the Chiefs further excavated their inventory of imaginative plays. At the Saints’ 1-yard line, Mahomes did not receive the shotgun snap so much as redirect it to his right, a chest pass to tight end Travis Kelce for a touchdown. According to the N.F.L.’s Next Gen Stats, Mahomes’s release time of 50-hundredths of a second was the fastest of any completion this season.

The Chiefs led, 14-0, and New Orleans, into the second quarter, had yet to record a first down or a completion. It took until the Saints’ fifth possession for them to get either, and on that same drive Brees seemed to summon all the strength in his right arm in connecting with Emmanuel Sanders down the sideline. The 51-yard pass play — Brees’s second-longest completion of the season — escorted the Saints to the 3-yard line and ushered Brees off the field.

During Brees’s injury absence, Taysom Hill showcased his versatility across four full games, winning three of them. But the Saints’ endgame is a championship, and with Brees back, Hill resumed his duties as a positionless dynamo, running on consecutive plays after the Sanders catch to cut Kansas City’s lead to 14-7.

Heading into halftime, the Saints nearly tied the score after the ball, stripped from the punt returner Demarcus Robinson, rolled into the end zone. But the Saints’ Alex Anzalone couldn’t fall on it in time, and it squirted away for a safety.

Even though 30 minutes remained, and even though the Saints went ahead early in the second half, teams that don’t take full advantage of the Chiefs’ mistakes don’t beat them. In the N.F.L. this season, that would be just about everyone. 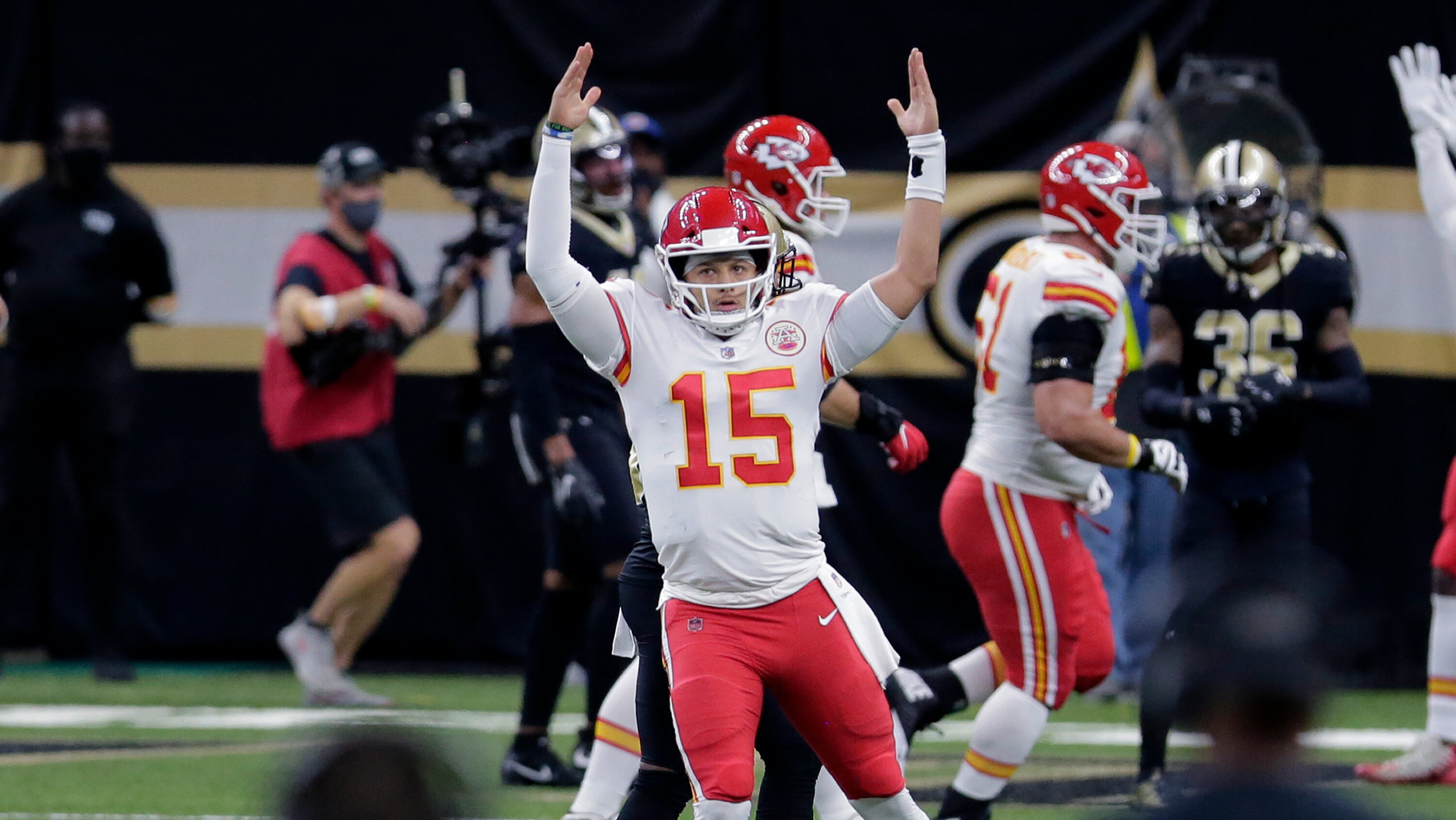