Buried in Pandemic Aid Bill: Billions to Soothe the Richest

WASHINGTON — Tucked away in the 5,593-page spending bill that Congress rushed through on Monday night is a provision that some tax experts call a $200 billion giveaway to the rich.

It involves the tens of thousands of businesses that received loans from the federal government this spring with the promise that the loans would be forgiven, tax free, if they agreed to keep employees on the payroll through the coronavirus pandemic.

But for some businesses and their high-paid accountants, that was not enough. They went to Congress with another request: Not only should the forgiven loans not be taxed as income, but the expenditures used with those loans should be tax deductible.

“High-income business owners have had tax benefits and unprecedented government grants showered down upon them. And the scale is massive,” said Adam Looney, a fellow at the Brookings Institution and a former Treasury Department tax official in the Obama administration, who estimated that $120 billion of the $200 billion would flow to the top 1 percent of Americans.

The new provision allows for a classic double dip into the Payroll Protection Program, as businesses get free money from the government, then get to deduct that largess from their taxes.

And it is one of hundreds included in a huge spending package and a coronavirus stimulus bill that is supposed to help businesses and families struggling during the pandemic but, critics say, swerved far afield. President Trump on Tuesday night blasted it as a disgrace and demanded revisions.

“Congress found plenty of money for foreign countries, lobbyists and special interests, while sending the bare minimum to the American people who need it,” he said in a video posted on Twitter that stopped just short of a veto threat.

The measure includes serious policy changes beyond the much-needed $900 billion in coronavirus relief, like a simplification of federal financial aid forms, measures to address climate change and a provision to stop “surprise billing” from hospitals when patients unwittingly receive care from physicians out of their insurance networks.

But there is also much grumbling over other provisions that lawmakers had not fully reviewed, and a process that left most of them and the public in the dark until after the bill was passed. The anger was bipartisan.

“Members of Congress have not read this bill. It’s over 5000 pages, arrived at 2pm today, and we are told to expect a vote on it in 2 hours,” Representative Alexandria Ocasio-Cortez, Democrat of New York, tweeted on Monday. “This isn’t governance. It’s hostage-taking.”

Senator Ted Cruz, Republican of Texas, agreed — the two do not agree on much.

“It’s ABSURD to have a $2.5 trillion spending bill negotiated in secret and then–hours later–demand an up-or-down vote on a bill nobody has had time to read,” he tweeted on Monday.

The items jammed into the bill are varied and at times bewildering. The bill would make it a felony to offer illegal streaming services. One provision requires the C.I.A. to report back to Congress on the activities of Eastern European oligarchs tied to President Vladimir V. Putin of Russia. The federal government would be required to set up a program aimed at eradicating the murder hornet and to crack down on online sales of e-cigarettes to minors.

It authorizes 93 acres of federal lands to be used for the construction of the Teddy Roosevelt Presidential Library in North Dakota and creates an independent commission to oversee horse racing, a priority of Senator Mitch McConnell, Republican of Kentucky and the majority leader.

Mr. McConnell inserted that item to get around the objections of a Democratic senator who wanted it amended, but he received agreement from other congressional leaders.

Alexander M. Waldrop, the chief executive of the National Thoroughbred Racing Association, said on Tuesday that Mr. McConnell had “said many times he feared for the future of horse racing and the impact on the industry, which of course is critical to Kentucky.”

That the racing legislation — versions of which the industry had debated for years — passed as part of the Covid-19 relief bill was of no particular mind, Mr. Waldrop said.

“It just developed this way over the last several weeks,” he said. “The only approach left to us was a federally sanctioned, independent, self-regulatory organization. It was our only viable option left, and this legislation accomplishes that.”

But the tax provisions — including extending a $2.5 billion break for racecar tracks and allowing a $6.3 billion write-off for business meals, derided as the “three-martini lunch” expense — have prompted the most hand-wringing.

The bill also would make permanent some lower tax rates levied on distillers, brewers and vintners.

No break is bigger, however, than the deductions that will soon be permitted under the Paycheck Protection Program. Businesses had been lobbying the Treasury Department and the I.R.S. since the spring to deduct spending from the program’s loans, but Treasury Secretary Steven Mnuchin was firmly opposed, saying deducting expenditures from funds not considered taxable income violated “Tax 101.”

The Paycheck Protection Program was the most visible part of the federal government’s coronavirus relief efforts in the spring to keep small businesses afloat. So far, the government has distributed more than $500 billion in loans, which could be forgiven and turned into permanent grants as long as the businesses use most of the money to pay workers and keep people employed.

In passing the law in the spring, Congress explicitly said that the Paycheck Protection Program funds should not be included as taxable income — unlike, say, unemployment benefits.

Despite that largess, businesses wanted more. In May, the heads of the tax-writing committees — Senator Charles E. Grassley, Republican of Iowa, Senator Ron Wyden, Democrat of Oregon, and Representative Richard E. Neal, Democrat of Massachusetts — wrote Mr. Mnuchin urging him to reconsider his opposition.

“Small businesses need help maintaining their cash flow, not more strains on it,” they wrote.

“So there’s no cost on the way in and no cost on the way out — those two don’t add up,” said Richard L. Reinhold, the former chairman of the tax department at Willkie Farr & Gallagher and a professor at Cornell Law School. Congress could have simply expanded the program, but instead it did it almost by stealth, through a tax deduction.

Lawmakers agreed to a plan to issue stimulus payments of $600 and distribute a federal unemployment benefit of $300 for 11 weeks. You can find more about the bill and what’s in it for you here.

“That’s the part that is troublesome,” he said.

Although there had been discussion of limiting the deduction to Paycheck Protection Program recipients below a certain income threshold, the final provision was made available to anyone, regardless of income.

The Small Business Administration this month released data showing that just 1 percent of the program’s 5.2 million borrowers had received more than a quarter of the $523 billion disbursed.

“The year 2020 is going to be one of the most unequal years in modern history,” Mr. Looney said. “Part of the inequity is the effect of Covid, which hammered service sectors the most and allowed rich, educated people to work on Zoom. But the government totally compounded these inequities with their response.”

Yet in the end, only six senators, all Republicans, voted against the coronavirus relief package and spending bill, mostly citing fiscal concerns about runaway spending, while 85 House members — a mix of Democrats and Republicans — voted against its military provisions. The bill increased military spending by about $5 billion.

Representative Ro Khanna, Democrat of California, opposed the military spending but voted for other aspects of the bill. He and his liberal colleagues had lobbied for direct payments for most Americans as part of a relief package, and he said he shared colleagues’ concerns about a lack of time to review the final piece of legislation.

“We need a better system to have members review online text as it is being drafted and have input,” Mr. Khanna said. “That said, leadership did keep us informed on almost daily calls about the essential aspects of the bills and the issues at stake.”

Senator Joe Manchin III, Democrat of West Virginia and one of the leaders of the bipartisan group that pushed for a $900 billion stimulus, said leadership intentionally waited until the last minute to unveil final proposals.

“Leadership likes the process the way it is,” he said. “Wait until the deadline, and then there’s no input at all. They say, take this or not. I’m sick and tired of how this game has been played.”

That said, there was plenty for lawmakers to cheer for. They sent out news releases promoting preferred provisions like the ban on most surprise medical bills, the restoration of college financial aid for incarcerated people and the restrictions on the use of powerful planet-warming chemicals that are commonly used in air-conditioners and refrigerators. The bill also creates new museums honoring women and Latinos.

“What you see at the end of every Congress is a clearing of the decks,” said Josh Huder, a senior fellow at the Government Affairs Institute at Georgetown University. “It’s all the stuff we wanted to pass but couldn’t. Everybody would love for legislation to be passed individually, but that is really a function of a bygone era that is not coming back.”

“There’s a lot of good stuff,” he said, “but something definitely gets snuck in.” 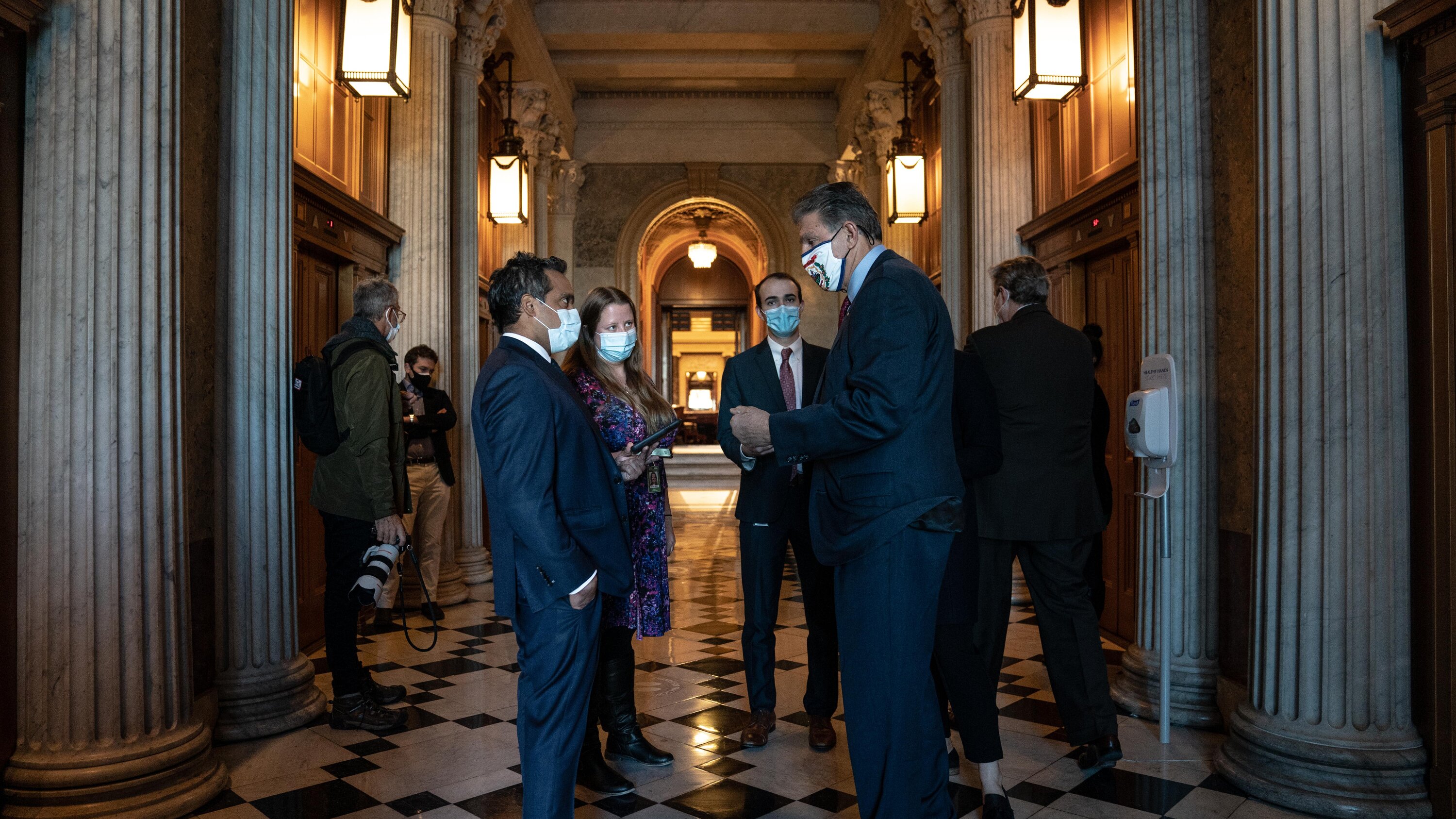