Chinese Swimmer’s Doping Ban Is Lifted After Accusation of Racism

Sun Yang, a three-time Olympic champion and one of China’s most celebrated athletes, had his eight-year ban from swimming suddenly overturned Wednesday by Switzerland’s federal court, which upheld a challenge questioning the neutrality of one of the panelists who had issued the penalty.

The Swiss federal court’s decision came after lawyers for Sun presented evidence that the chairman of the three-member panel that issued Sun’s ban in February had made racist comments about China on social media.

The ruling was a rare encroachment on the body that issued the suspension — the Court of Arbitration for Sport, which is based in Lausanne, Switzerland — and it means that Sun, whose competitive career was effectively ended by the doping ban, is free to resume swimming at least until his case is heard by a different panel at the sports court.

Sun, 29, a six-time Olympic medalist and the first Chinese man to win a swimming gold medal at the Games, has waged a multiyear battle with the World Anti-Doping Agency to preserve his eligibility for international competition.

WADA brought a complaint against Sun to the court last year after swimming’s international governing body declined to penalize him for refusing to cooperate with three antidoping officials who had traveled to his home in China to collect blood and urine samples. The court, after a hearing in November 2019 that was marred by translation issues, agreed with the antidoping agency’s underlying claim that Sun had violated rules governing efforts to tamper with doping procedures.

WADA now will have to argue its case against Sun all over again. The global antidoping body said in an emailed statement that it was aware of the Swiss federal court’s decision to set aside Sun’s ban.

The judgment, WADA said, was based not on the merits of the case, but on concerns about the chairman of the three-person CAS panel, the former Italian foreign minister Franco Frattini. Sun’s lawyers had appealed to the Swiss federal court after gathering what they said were public comments by Frattini that included anti-Chinese sentiments. News media reports earlier this year highlighted Twitter posts from Frattini’s account expressing disdain over examples of animal cruelty in China. At least one post included a term that is considered an anti-Chinese slur.

Frattini could not be reached Wednesday for comment on the decision, the accusations against him or his social media posts.

The decision is likely to lead to yet more frustration inside the global antidoping movement, which last week saw a different CAS panel significantly reduce the penalties issued against Russia for running a yearslong, state-backed doping scheme. Wednesday’s ruling will also raise new questions about the Court of Arbitration for Sport’s competence in handling high-profile cases.

Sun’s 2019 hearing at the sports court, the first in more than a decade to be held in public, descended into confusion and acrimony amid major translation difficulties among Sun, his witnesses and the three member-panel, all Europeans without Chinese language skills. It is unclear whether the new hearing will take place in public, but WADA said Wednesday night that it would retry the case.

“WADA will take steps to present its case robustly again when the matter returns to the CAS panel, which will be chaired by a different president,” the agency said.

The eight-year doping ban imposed in February was the first against a Chinese sports figure as influential as Sun, who is a national hero on a par with the country’s former basketball star Yao Ming.

The case is the biggest doping scandal involving China since more than 30 swimmers from the country were caught using banned substances in the 1990s, and 40 of its 300 athletes were withdrawn from the 2000 Sydney Olympics by the Chinese authorities. At the time, news reports suggested the athletes had returned suspicious blood-test results.

In 2014, Sun was suspended for three months by the Chinese authorities after he tested positive for a recently banned prescription drug, and he has long drawn suspicion from fellow swimmers. Several rivals verbally sparred with him at the world championships in July 2019 or refused to stand on the medals podium with him after races.

Sun’s fans reacted with fury at the news of his eight-year suspension. Social media platforms were flooded with messages of support for the swimmer and anger at the decision, which many described as anti-Chinese and designed to harm the country.

Sun has vowed to clear his name, even though his options appear to be limited. The Swiss federal court has standing to hear only claims about procedural irregularities, and not about the substance of cases brought before it. 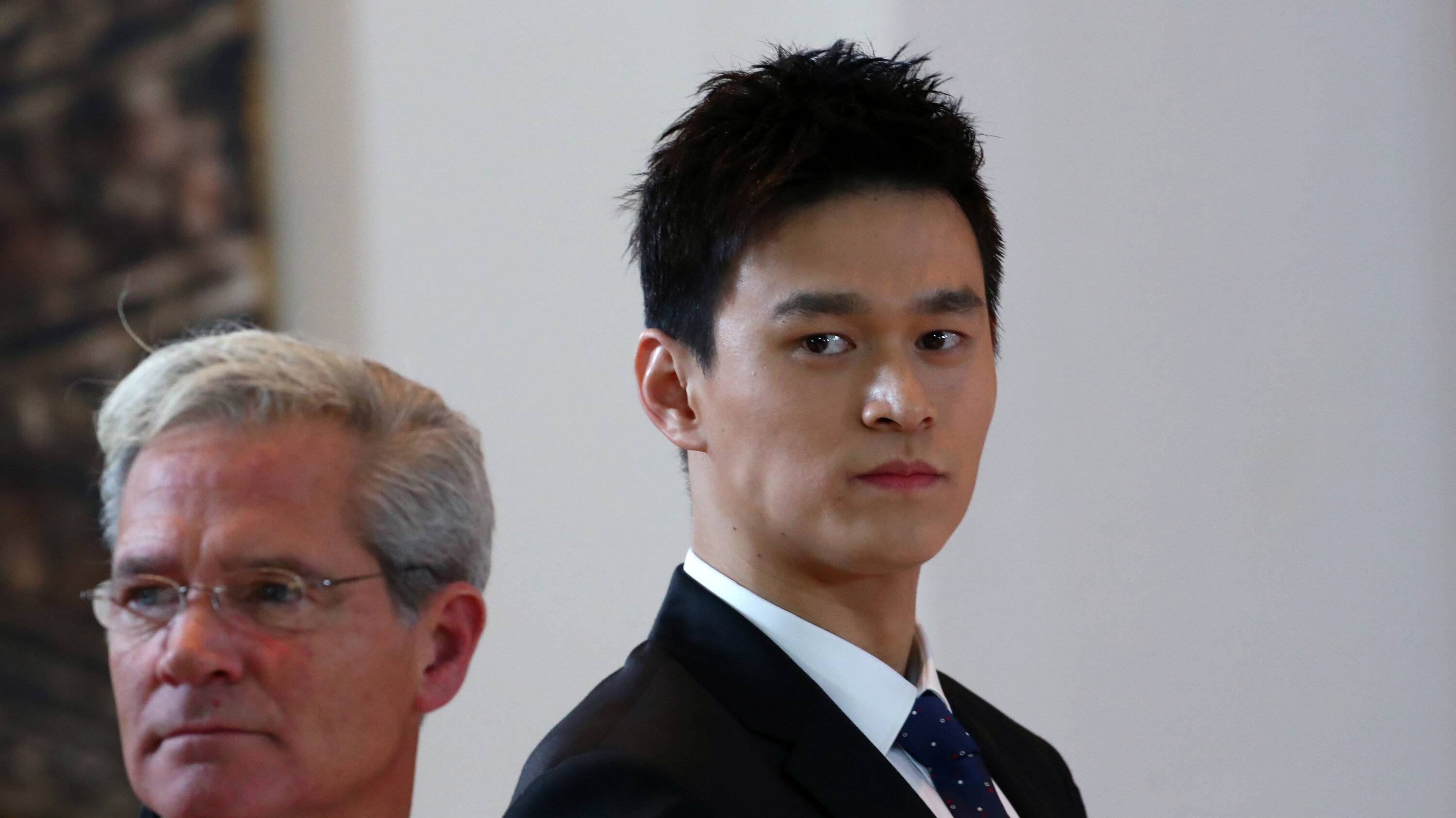