Mexico Misled Citizens About the Severity of Coronavirus in its Capital

MEXICO CITY — In early December, the pandemic was roaring back in Mexico City: After declining over the summer, the coronavirus was spreading rapidly, hospitalizations were spiking and ventilators were running low.

Despite the surge, federal officials reassured the public during a Dec. 4 briefing that Mexico City had not reached the critical level of contagion that, according to the government’s own standards, would require a full lockdown in the city, shutting down its economy.

In fact, Mexico’s capital had surpassed that threshold according to its own official numbers, an analysis by The New York Times has found. Yet officials kept the capital open for business for an extra two weeks, its streets thronged with shoppers, its restaurants teeming with diners.

Mexico decides when to put the nation’s capital and each of its states on lockdown based on a formula that considers the latest numbers of cases, hospitalizations and deaths. When the government introduced the system, officials told Mexicans that it would be a transparent and objective measure of the spread of the virus.

But in making that computation for Mexico City in the beginning of December, the government used lower numbers in two critical areas — the percentage of hospital beds with ventilators that were occupied, and the percentage of positive coronavirus test results — than were publicly stated in its official databases. In repeated requests to comment for this article, government officials would not explain where the unaccountably lower numbers came from.

The result was that Mexico’s capital city, with nine million residents, kept businesses open in the busy weeks of early December. Now it finds itself in deep crisis.

The government finally moved to shut the city down on Friday, but by then the capital’s hospitals were already overflowing. Last week, the city set record after record for the highest number of patients hospitalized since the pandemic began.

Overwhelmed doctors began posting desperate pleas on social media, urging Mexicans to stay home and warning that there were no beds left. They are running out of medicine to sedate patients and specialists to treat them, they say.

“We are alone, the federal government isn’t helping us — they’re actually taking this lightly,” said Dr. Diana Banderas, who treats coronavirus patients at the Carlos MacGregor hospital in Mexico City. “Now, we are collapsing.”

Federal health officials did not provide a response to requests for comment. The government of Mexico City pointed to recent public comments by the mayor, Claudia Sheinbaum, who said that her government had avoided a lockdown because “this time of year is really important in terms of families’ finances.”

Unlike many global leaders, the Mexican president has not used a stimulus program to support businesses and the unemployed during the pandemic. Without a safety net in place, closing down Mexico City in the middle of the holiday shopping season would inflict considerable pain on the nation’s economy.

But allowing Mexico City’s residents to crowd into stores, dine indoors and work in their offices for two weeks while the virus was known to be spreading rapidly has increased the burden on an already strained public health system, experts say.

More than 85 percent of hospital beds in the capital were occupied on Sunday, according to federal data, up from 66 percent when the government decided to delay the lockdown.

Turned away by public hospitals and unable to afford private clinics, a growing number of Mexicans are dying at home. Relatives of patients line up for hours outside medical stores to buy oxygen for loved ones fighting the virus from their sickbeds.

“I read that the hospitals are overflowing,” said Alan Pluma, who waited in a line that stretched a city block to purchase two oxygen tanks for his parents, both at home sick with the coronavirus. “What are we going to do if things get worse?”

Health workers are dying, too — more doctors, nurses and technicians have died of the coronavirus in Mexico than anywhere else in the world, according to a recent Amnesty International report.

“They have deliberately tried to hide the emergency,” said Xavier Tello, a health policy analyst based in Mexico City, repeating a belief often heard among public health experts in Mexico. “Every day they delayed the decision, more people were exposed.”

To determine when to limit economic activity in each state and in the capital, the Mexican government set up a system that takes into account 10 measures of hospitalizations, infections and deaths.

The levels of risk were labeled according to the colors of Mexican traffic lights: green meant the numbers were low, orange denoted a higher risk and a few restrictions, and red signaled a widespread outbreak that called for a shutdown of all nonessential businesses.

The calculation assigns a certain number of points to each indicator, depending on its severity. When the sum of all points total more than 31, the state, or the capital city, gets a red light — and that prompts a lockdown.

Hugo Lopez-Gatell, the deputy health minister who is leading the nation’s coronavirus response, had said in a news conference that the traffic light system was an “objective instrument” over which “there can be no negotiations.”

But in its early December calculation, the government used two numbers that were lower than official figures published elsewhere, according to federal documents reviewed by The Times.

In a Dec. 4 document signed by Mr. Lopez-Gatell that notified Ms. Sheinbaum, the Mexico City mayor, about the risk calculation, the federal government claimed that only 45 percent of hospital beds with ventilators were full. But earlier, Mr. Lopez-Gatell publicly released an official chart stating that 58 percent of beds with ventilators were occupied — well above the level that should have added a point to the city’s traffic light total.

In fact, a review of the database the government uses in the risk calculation showed that the occupation of hospital beds with ventilators in Mexico City had not dropped below 50 percent since early November.

The document that Mr. Lopez-Gatell sent to Ms. Sheinbaum also claimed that 25 percent of coronavirus tests in the city came back positive in late November. But the federal government’s own official data shows that more than 35 percent of tests had a positive result during that period.

If, in both cases, the government had used the higher official figures, the city’s point total would have reached 33, provoking a red-light warning and requiring a lockdown.

Instead, government officials insisted that the city was at a moderate level of risk — orange, under its traffic light system — and that there was no need for more stringent health measures.

That announcement was met with shock by doctors across Mexico City, who could not square the government’s assessment with the demand they saw in hospitals, which were busier than in May, during the first peak of the pandemic.

“I am seeing twice as many patients as I was a few months ago. Then I leave work and see on TV they’re saying we are almost under control,” said Dr. Juan Carlos Bollo, who treats coronavirus patients at two public hospitals in the capital.

Mr. Lopez-Gatell has recently tried to minimize the importance of the traffic light system that he created and championed.

In a news conference during the two-week period when the city remained open, Mr. Lopez-Gatell batted away questions about why the city was not at the red level of risk.

“The color of the traffic light is at a certain point irrelevant,” he said, a week before the city was finally shut down.

The mayor, for her part, could have broken with the federal government and put the city on lockdown earlier. But that move would have been politically risky. She has close ties to the Mexican president, Andres Manuel Lopez Obrador, and he has minimized the pandemic from the start.

Ms. Sheinbaum also made it clear that she did not want a lockdown in the capital.

“We are doing everything within reach,” she said recently, “absolutely everything to avoid a situation in which we have to shut down all activities.”

Oscar Gutierrez, who runs a flower stand in the capital, said he did not know if he could survive another lockdown. He was forced to close his shop for three months starting in May, which meant losing out on Mother’s Day sales and having to support his family with his savings.

“As much as the government might want to send us back into isolation, I think the economy here in Mexico wouldn’t allow it,” Mr. Gutierrez said.

The way he sees it, people will take their chances with the coronavirus over hunger. 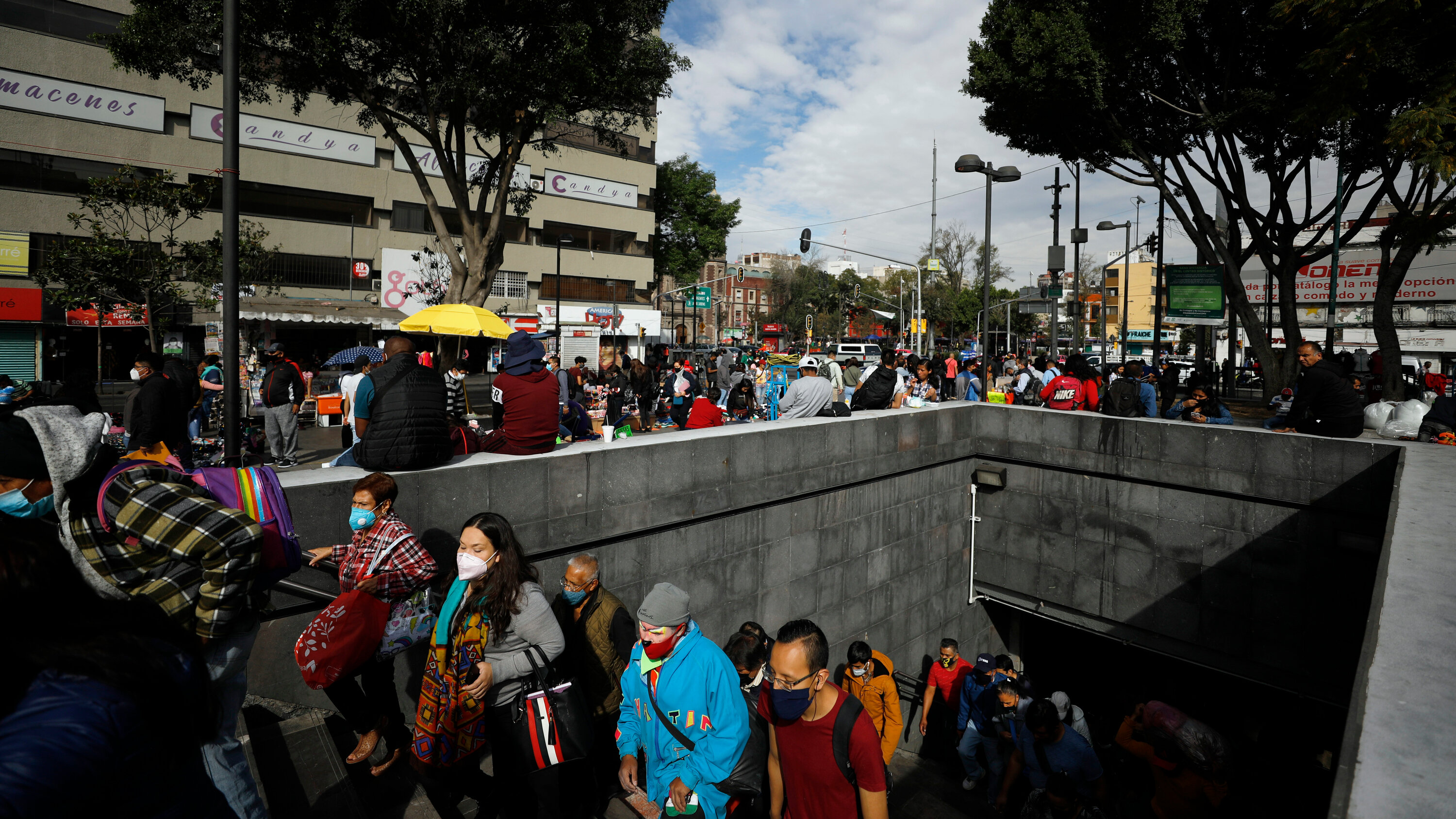