Home Sport The Olympics Were Postponed. The U.S. Marathon Champion Got Pregnant.
Sport

The Olympics Were Postponed. The U.S. Marathon Champion Got Pregnant.

Aliphine Tuliamuk was the surprise winner of the Olympic Trials marathon on Feb. 29.

The elation was short-lived, though. Within a month, the coronavirus pandemic had forced organizers to postpone the Tokyo Olympics by a year. Tuliamuk’s attention briefly shifted toward a fall marathon. But when it became clear that nearly every major marathon would be canceled, her focus once again shifted.

At 31, she and her partner, Tim Gannon, decided that fate had given them a small window to have a child.

She went to her coach, Ben Rosario of Northern Arizona Elite, with her plan. “She said, ‘We are only going to give ourselves a couple of months to try, because I’m going to work backward from the Olympics in 2021,'” he recalls her saying.

The timing worked in her favor.

The Olympics were postponed on March 24. Tuliamuk was pregnant by April. She is due on Jan. 22, and remains intent on competing next summer in Japan. “She has told me in no uncertain terms that she wants to be ready,” Rosario said.

Here’s how she intends to make it happen:

She is continuing to run through the pregnancy.

Tuliamuk has adapted her training considerably, and Rosario says its been months since he wrote her a training plan. But she’s still running. “She’s going out every day and doing what the body says is OK,” he said.

“I’m healthy, happy and it’s amazing to have my daughter with me on my runs now,” Tuliamuk said. “I look forward to getting outside to run, even if I’m not running as fast as I normally do in training.”

So far, she’s been running four to five days a week. “Aside from a little discomfort occasionally, I feel pretty much the same.”

It’s a world away from the height of her training. In the 8-12 weeks before a race, at the peak of her training, Tuliamuk runs more than 100 miles a week.

Tuliamuk is accustomed to quick turnarounds

Giving birth in late January and racing at the Olympics in August will no doubt make for an interesting training schedule, but it’s nothing new for Tuliamuk.

She raced the 2019 New York City Marathon after only six weeks of training because of an injury and finished 12th. “So I’ve been in less ideal conditions for a marathon buildup before,” she said.

Rosario wants to take a gradual approach to increasing both volume and intensity of training in the spring, he says. “It’s all determined by listening to the body.”

Tuliamuk is hoping to officially start training by early May, three months before the Olympic marathon.

She’s been consulting with marathon moms

There’s a long list of professional athletes — and marathon runners in particular — who have returned to competition soon after having a child. “Some of the top female marathoners in the world including the world-record holder in the marathon are mothers,” Tuliamuk said. “Seeing so many mothers run fast, I’m confident my best days are ahead of me.”

Paula Radcliffe famously won the 2007 New York City Marathon 10 months after giving birth to her daughter. She would go on to run the marathon at the 2008 Beijing Olympics.

Kara Goucher placed fifth in the 2011 Boston Marathon — setting a new personal best by a minute — six months after giving birth to her son. She also ran the marathon at the London Olympics.

And Tuliamuk’s teammates, Stephanie Bruce and Kellyn Taylor, are both elite marathoners and mothers whose careers have thrived since becoming parents.

“We have long believed on the team that it is important to have a life outside of running,” Rosario said. “Aliphine has these two role models that are not only teammates but also moms.”

The Olympic Marathon is never a speed race. After Tokyo was deemed too hot, the marathon was moved to the mountains, but temperatures will still be warm and a course in the mountains should make the race slow and tactical, bringing the fastest marathoners back to the pack. It could be anyone’s race, even a new mother competing after a conducting an unconventional training schedule.

“I consider myself a versatile athlete who can do well in various conditions, but I’ve always loved challenging races,” Tuliamuk said.

“When I won the Olympic Marathon Trials in Atlanta, it was on a hilly course during a cold, windy day. Tough conditions can be mentally daunting for many people but I tend to thrive through adversity; so I think this race will work well to my advantage.” 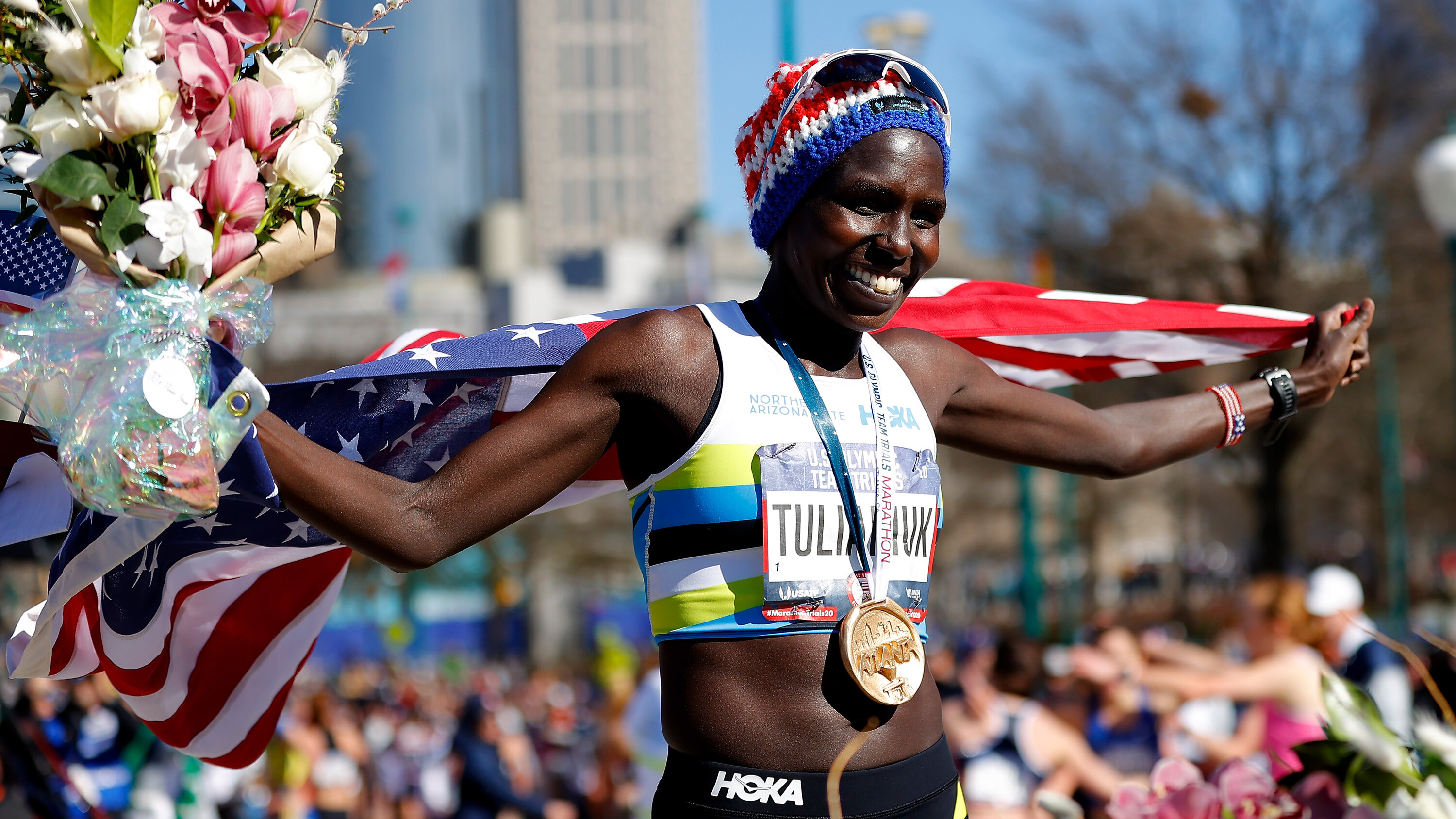