Home Sport Amar'e Stoudemire Is a Coach Now. But Don't Call Him That.
Sport

Amar’e Stoudemire Is a Coach Now. But Don’t Call Him That.

Amar’e Stoudemire Is a Coach Now. But Don’t Call Him That.

Stoudemire has reunited with his Phoenix Suns cohort of Steve Nash and Mike D’Antoni on the Nets’ staff. It’s weird to him, too.

As recently as late July, Amar’e Stoudemire was seemingly as far away as possible from joining the Nets’ coaching staff and a high-wattage reunion of Phoenix Suns alumni in Brooklyn. Stoudemire was still playing abroad — and helping Maccabi Tel Aviv win a 54th league championship in Israel.

He didn’t know at the time that Steve Nash, the former on-court conductor of the Suns’ “Seven Seconds or Less” era, was a top-secret candidate to become the Nets’ new head coach. Like most connected to the N.B.A., Stoudemire also had no inkling that Mike D’Antoni — who had built a revolutionary offense in Phoenix around the Nash-and-Stoudemire combination — would soon pivot from coaching the Houston Rockets to becoming Nash’s offensive coordinator.

For most of the summer, Stoudemire, 38, mostly wrestled with whether to keep playing. He was offered a new one-year contract by Maccabi soon after his performance (18 points and 7 rebounds) in the Israeli Basketball Premier League title game earned him most valuable player honors.

“I never really thought much about coaching, to be honest with you,” Stoudemire said.

That all changed in September after Nash, who played alongside Stoudemire for six seasons until Stoudemire’s high-profile move to the Knicks in 2010 free agency, was hired by the Nets as their head coach. Stoudemire reached out with interest in exploring his options to begin a post-playing career. Nash, who had also pitched player development roles on his fledgling staff to his former teammates Dirk Nowitzki and Raja Bell, made a similar offer to Stoudemire.

“He’s just getting his foot in the door,” Nash said. “We wanted him to come in and share all the things that he learned from his experiences — but also to learn about coaching, video analysis, analytics and the front office.”

Israel had “absolutely” become a second home, Stoudemire said, after he immersed himself in Judaism over the past decade and then obtained Israeli citizenship in March 2019. That comfort level only added to the lure of playing one more season with Maccabi, but Stoudemire decided to give coaching a try, unsure as he was, even after 14 seasons in the N.B.A. and three playing in Israel and China, that he had reached an age he associated with the profession.

“I just never liked the title Coach,” Stoudemire said. “There’s not a lot of swagger that comes with that title. I’m still not quite there yet. I’m still very young, and I like to feel young.”

On the Nets’ organizational chart, Stoudemire has been officially named a player development assistant. He brings some experience to the role despite his ambivalence about the coaching label, having hosted a few Nike camps in his Suns and Knicks prime in which he worked briefly with future stars such as Blake Griffin, DeMarcus Cousins and Anthony Davis.

At Maccabi last season, Stoudemire also served as a mentor to the Israeli teenager Deni Avdija, who last month became the first lottery draft pick in his country’s history when the Washington Wizards took him with the No. 9 overall selection. Stoudemire, himself a former No. 9 pick in Phoenix, routinely urged Avdija, a versatile 6-foot-9 forward, to “get a triple-double every single chance he gets” and to “attack the rim with force.”

“We worked on a no-mercy mind-set,” Stoudemire said.

Stoudemire “brings great energy,” Nash said, and can still participate in drills when needed. Nash called him “one of the first true small-ball centers” with much to pass on to modern big men. Nash and D’Antoni have often lamented that their groundbreaking Phoenix teams didn’t lean even harder on smaller lineups, rampant 3-point shooting and fast-paced play — all of which is much more accepted now than it was then. They were wildly successful but ultimately fell short of a championship.

Beyond the practice floor, yet another Suns alumnus from that period — Nets General Manager Sean Marks — has given Stoudemire the latitude to sit in on management meetings to get a taste of front-office planning, scouting and recruiting strategies and integrating analytics with traditional coaching.

“He has complete access,” Nash said. “We’re pushing him to be as involved as he wants.”

“I get to learn from all departments,” Stoudemire said, “to see where I want my career to go.”

The varied coursework feeds into a studious side that took hold of Stoudemire as his career progressed in the N.B.A. and blossomed in Israel, where he had two stints with Hapoel Jerusalem, Maccabi’s fiercest rival, before a January 2020 move to join the Tel Aviv club. Initially inspired to become a student of Torah after joining the Knicks in July 2010 and gaining more exposure to Judaism and its connections to his family’s heritage, Stoudemire enrolled at multiple yeshivas as a Jerusalem player to learn the religion’s Orthodox customs. He completed a formal conversion to Orthodox Judaism in August.

Stoudemire observes the Jewish Sabbath (Shabbat) from sundown Friday to sundown Saturday, keeps a kosher diet and became known in his Maccabi days for arriving at games in all-black Orthodox clothing rather than the trendy gear that has transformed player arena entrances in the N.B.A. into a virtual sport unto itself. Stoudemire, whose Hebrew name is Yehosaphat, said he would work with the Nets to determine the best way to maintain the same level of Orthodox Shabbat observance now that he is back in the United States, where businesses do not shut down on Friday nights as they largely do in Israel.

“My time in Israel was amazing,” Stoudemire said. “It took me to another level of purifying myself and making me more mature. From the first day I got there to the last day to walking off with the M.V.P. trophy, it was simply a remarkable experience.”

Nash said: “I really admire him. It’s not just our history and our relationship, but how open and inquisitive he is. Amar’e never feels like he’s fully formed; he’s always trying to learn more and do more. So when he showed interest, I said, ‘This is the kind of guy I want.'”

Steve Nash, second from left, recorded his first coaching victory with the Nets in their opener on Tuesday night, a 125-99 win over the Golden State Warriors.Credit…Sarah Stier/Getty Images

The learning continues back on American soil: Stoudemire said he was taking online courses at the University of Miami in pursuit of an M.B.A. to augment his new job. One veteran coach who knows him well, though, thinks Stoudemire is more of a coaching natural than he even realizes.

Phil Weber, known as Drill Phil for his player development work on D’Antoni’s staff in Phoenix, predicted that “players will immediately respect and naturally gravitate towards him.” Weber worked for years with Stoudemire on his shooting after their time together in Phoenix and said it would quickly be evident to the Nets “how much Amar’e cares and how personable he is.”

The Nets’ Kyrie Irving said of Nash and the influence of so many former Suns: “Coming in with Mike D’Antoni, with Amar’e Stoudemire, they have been able to guide us to come together as a group.”

Stoudemire emphasized, for the record, that he had not formally retired as a player. He likewise remains uneasy about Nets big men such as DeAndre Jordan and Jarrett Allen calling him Coach because the connotation, he said, “has kind of an older vibe to it.”

Told that, on the flip side, being addressed in that manner could also suggest he had a higher level of wisdom, Stoudemire said, “I’ll take it.” 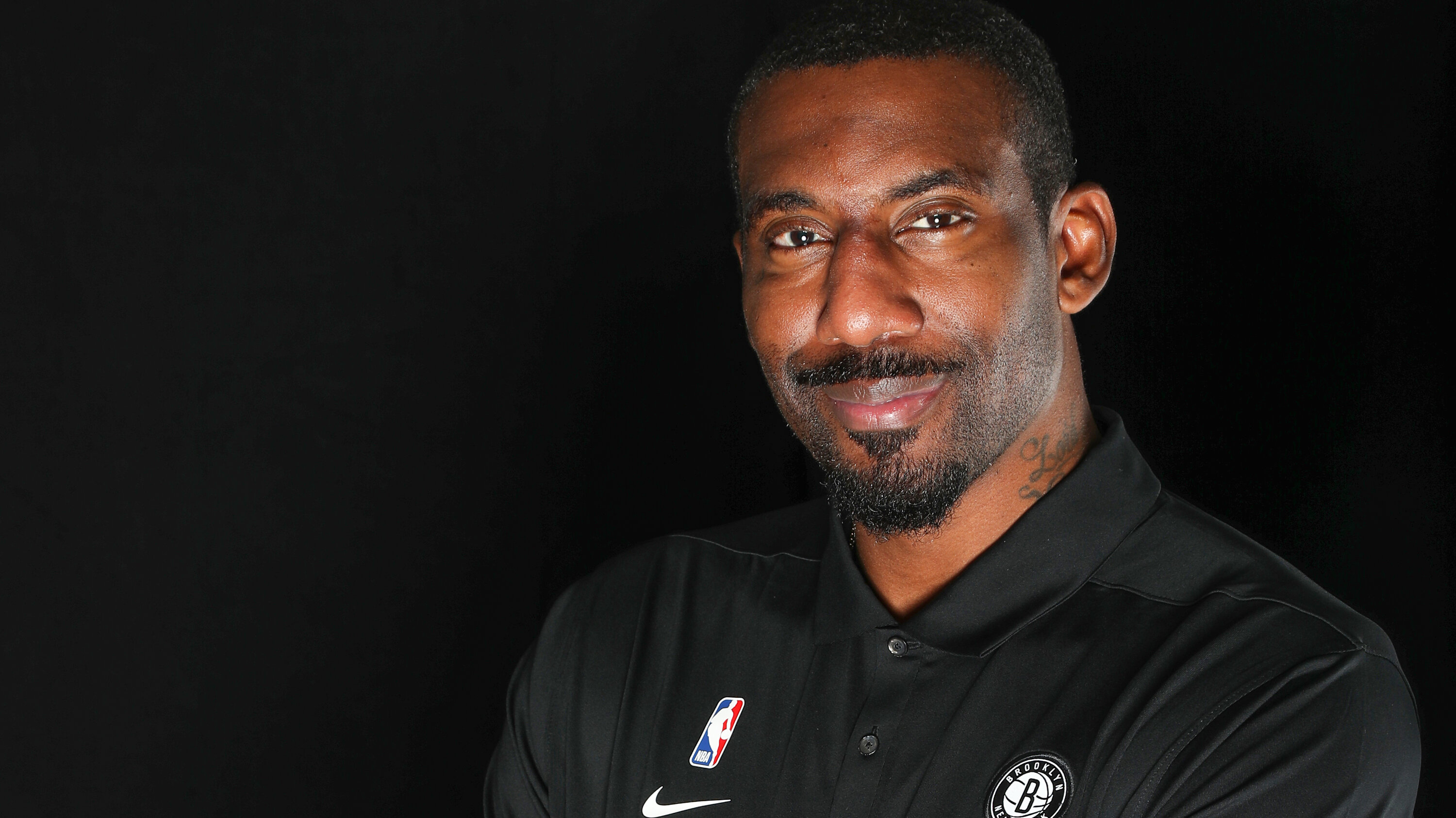