An N.B.A. Christmas Gift: LeBron, Steph and Luka in Action

Christmas Day isn’t just the most important day of the year for our friends in the North Pole. It’s also a landmark day for the N.B.A., where for decades the league has put its top stars and best teams in matchups against each other for viewers to watch while guzzling egg nog. (The league’s first Christmas Day games came in 1947, when the Baltimore Bullets beat the Chicago Stags, 87-70 at the Baltimore Coliseum.)

This Christmas Day comes at a strange time for the N.B.A. campaign, in that it is the first week of the season. Fans won’t be in the stands. Ten teams will face off throughout the day — the 13th straight year that the N.B.A. has put five games on the slate — and many of the league’s most famous faces will be on the court, including LeBron James, Zion Williamson, Kevin Durant and Stephen Curry.

There have been some classic games on Christmas Day. This one, for example, will mark 35 years since a rookie Patrick Ewing helped the Knicks dig out of a 25-point hole with 32 points and 11 rebounds to beat the Boston Celtics at Madison Square Garden.

A guide to each Christmas Day game:

All times are Eastern.

Pelicans vs. Heat: Zion gets his Christmas debut.

One thing to know: The Heat’s Erik Spoelstra is 7-0 on Christmas, tied for the league’s best career coaching record on the holiday with Les Harrison, who coached the Rochester Royals from 1948-55.

Preview: The Heat had less than eight weeks of rest after their Cinderella trip to the N.B.A. finals in the league’s bubble season — less of an off-season than any team apart from the Los Angeles Lakers. They will also get no semblance of a Christmas morning at home after drawing the early game.

Miami not so surprisingly looked sluggish (and turnover-prone) in its season-opening loss Wednesday at Orlando. Now the Heat have to deal with an unwelcome tipoff time as well as the brutish Zion Williamson, who will be playing on the league’s biggest regular-season stage for the first time after missing out as a rookie last season because of knee surgery.

With considerable curiosity bubbling about how he will fare playing for the demanding Stan Van Gundy, New Orleans’s new coach, Williamson averaged 28.5 points in two preseason games and has noticeably slimmed down since last season.

Warriors vs. Bucks: Battle of the two-time M.V.P.s.

One thing to know: After winning his second straight Most Valuable Player Award, Giannis Antetokounmpo held the city of Milwaukee — and many Wisconsinites — in a state of agitation/fear/panic for several weeks leading into the preseason as he weighed whether to sign a long-term extension with the Bucks. Last week, he finally put an end to his community’s collective anxiety by agreeing to the most lucrative contract in league history, a five-year deal that could be worth about $228 million.

Preview: Antetokounmpo has led the Bucks to the league’s best regular-season record in each of the last two seasons, but the playoffs have been a different story. The Bucks came up short again last season, falling in the Eastern Conference semifinals to the Miami Heat, and Antetokounmpo desperately wants to reach the N.B.A. finals — and win a championship. It will not be easy. The Bucks got a taste of some top-level competition in their season-opener on Wednesday night, when the Boston Celtics escaped with a 122-121 win. Antetokounmpo missed a late free throw that likely would have sent the game to overtime. He was not pleased.

As for the Warriors, their glorious, championship-cluttered past never seemed quite so distant as it did on Tuesday night, when the Nets helped christen the season by demolishing them, 125-99. After missing much of last season because of injuries, Stephen Curry, a two-time M.V.P., appears to be back at full strength. But without Klay Thompson, who is sidelined for the second consecutive season, the Warriors could be in for another long stretch of growing pains.

Preview: This matchup will comes down to star duos: Jayson Tatum and Jaylen Brown for the Celtics, and Irving and Kevin Durant for the Nets.

The Celtics are coming off an Eastern Conference finals run last year, in which they were upset by the Heat. They had a challenging off-season, losing the former All-Star Gordon Hayward in a free agency related trade, while Kemba Walker, another All-Star, continued to deal with knee issues that will keep him out for several more weeks. Instead, the Celtics are relying on Tatum, 22, and Brown, 24, to carry them, in addition to their young players, like Robert Williams III and Grant Williams. (The Celtics did add two quality veterans in the off-season, Tristan Thompson and Jeff Teague, who will help.)

For the Nets, Irving and Durant have looked like the superstars the Nets hoped for when they were signed before the 2019-2020 season. They dominated on opening night at home against the Golden State Warriors. Durant, who had not played competitive basketball in 18 months, did not look like he’d lost a step. Caris LeVert has looked comfortable running the second unit. This team has quickly established itself as the favorite in the Atlantic Division if not the East.

This game will also mark Irving’s official return on court in Boston, where he played for two seasons. The team underachieved in 2018-2019, and Irving left for the Nets, despite having said that he was committed to staying in Boston. The Celtics players seem to have remained on good terms with Irving. The fans, not so much.

Mavericks vs. Lakers: Luka can make his case for M.V.P.

One thing to know: With 35 more points, LeBron James will become the league’s highest career scorer on Christmas, surpassing No. 1 Kobe Bryant (395 points) and No. 2 Oscar Robertson (377).

Preview: Instead of playing in an N.B.A. finals rematch against Miami in the day’s marquee television time slot, James and the Lakers will host Dallas and Luka Doncic, one of this season’s M.V.P. favorites. The scheduling is symbolic of Doncic’s growing stature in the Slovenian’s third N.B.A. season.

“I always wanted to play on Christmas Day,” Doncic said.

James tweaked his left ankle in the Lakers’ opening night loss to the Clippers and missed the final eight minutes — “I turned it pretty good,” he said — but insisted that the injury won’t keep him from squaring off with Doncic. The Mavericks also lost their first game and, of far greater concern, faltered in the fourth quarter of their 106-102 defeat by Phoenix to promptly revive discussions about Dallas’s repeated crunchtime failings last season.

The Mavericks’ will be without Kristaps Porzingis, but all indications are that Dallas’s second-best player is nearing a return ahead of schedule. Porzingis sustained a knee injury in the bubble in August that required another surgery after a more serious knee tear derailed his time with the Knicks.

Clippers vs. Nuggets: They have something to prove.

One thing to know: In the Nuggets’ 124-122 overtime loss to the Sacramento Kings on Wednesday night (more on that in a moment), Nikola Jokic finished with 29 points, 15 rebounds and 14 assists for 42nd career triple-double. That puts him fourth among active players, according to Basketball Reference. The names ahead of him are fairly recognizable: Russell Westbrook, LeBron James and James Harden.

Preview: As mentioned above, the Nuggets lost their season opener — and in ridiculous fashion. The Kings’ Buddy Hield won the game with a tip-in at the buzzer. But the Nuggets are not all that far removed from a stirring postseason run, one that was highlighted by their Game 7 knockout of the Clippers in the Western Conference semifinals. Jokic, 25, and Jamal Murray, 23, who was virtually unstoppable in the bubble, are just entering their primes.

The Clippers, of course, have championship hopes of their own, and they showed some mettle in a season-opening win against the Lakers on Tuesday night. Paul George, who struggled in the bubble, reaffirmed his status as one of the league’s best players by scoring 33 points while shooting 13 of 18 from the field. 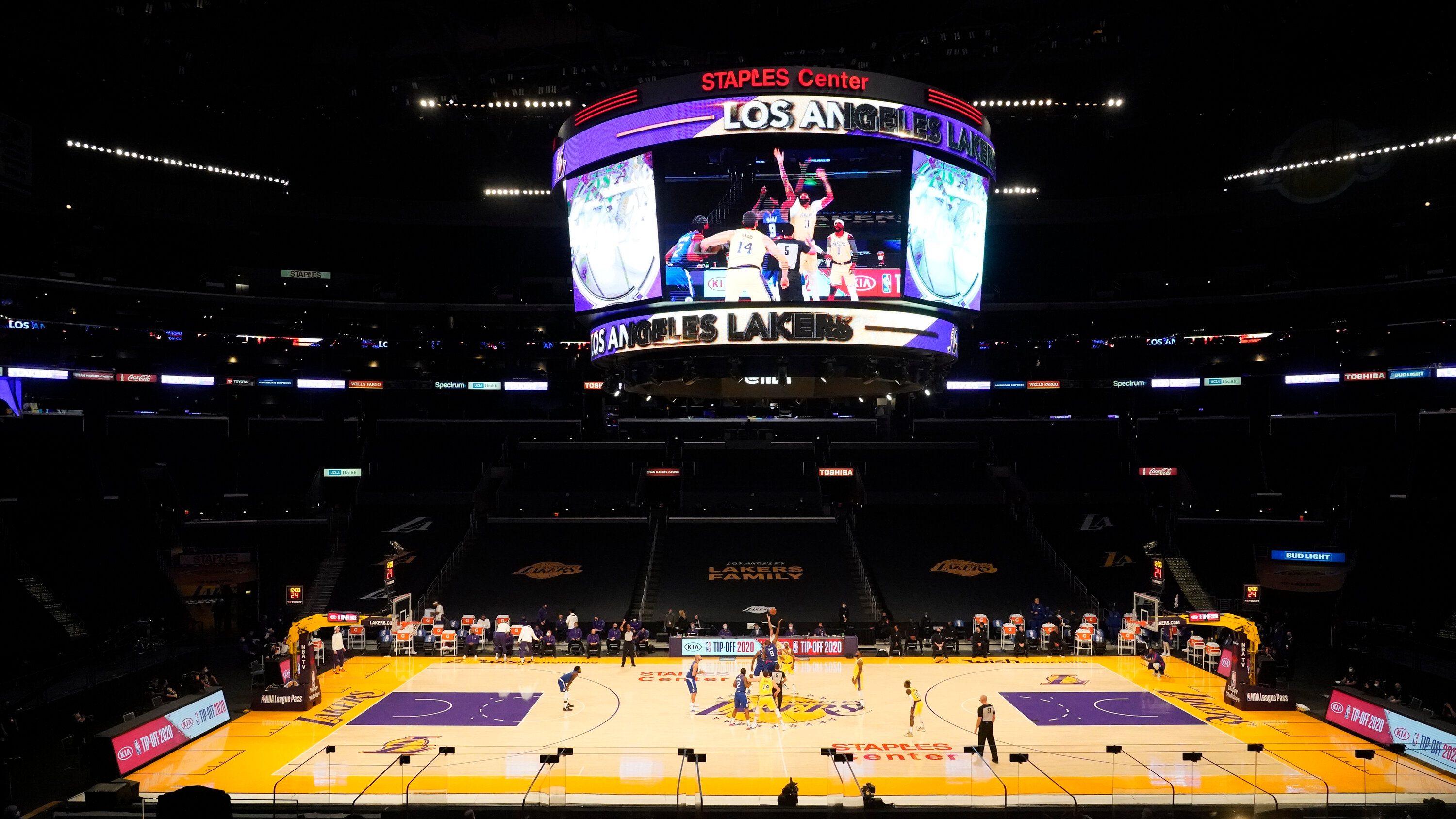