MEXICO CITY — Mexico began its coronavirus vaccination campaign on Thursday, becoming the first country in Latin America to do so, and providing a sliver of hope to the population amid a roaring resurgence of the virus.

The head nurse at the Ruben Lenero hospital in Mexico City, Maria Irene Ramirez, 59, was the first person in the country to get the Pfizer-BioNTech vaccine, as part of the government’s strategy to focus on health care workers in December, January and February before moving on to the older Mexicans considered most at risk.

“This is the best gift that I could have received in 2020,” Ms. Ramirez said during the ceremony, which was broadcast on national television. “We are afraid, but we have to keep going because someone has to face this fight.”

Latin America has become an epicenter of the pandemic, with inequality, a large informal work force, densely packed cities and a fragile health system hindering efforts to stop the spread of the virus and treat the sick.

Countries in the region, led by Brazil and Mexico, racked up some of the world’s highest death tolls as economies crumbled under the weight of lockdowns and government mismanagement.

The first doses of the Pfizer-BioNTech vaccine have also arrived in Costa Rica and Chile, with both countries beginning vaccinations on Thursday. The first 300,000 doses of Russia’s Sputnik V landed in Buenos Aires, in Argentina, on Thursday morning.

The inoculation effort in Mexico is starting as a vicious new wave of the virus has packed hospitals and led authorities to call for a lockdown in the capital, Mexico City, and in three other states. More than 120,000 people have died nationwide, although limited testing means the true count could be much higher.

As of mid-November, some 250,000 more people than expected had died this year, according to official data, an excess mortality rate that suggests a far heavier toll.

With widespread distrust of public institutions, many Mexicans have avoided going to the hospital and instead preferred to be treated, and to die, at home, so that their illness or their cause of death is often not officially recorded as Covid-19.

The country’s response to the outbreak has been widely criticized, with President Andres Manuel Lopez Obrador refusing to wear a mask in public and continuing to hold public rallies across the country.

Last week, Mexico City authorities increased the capital’s pandemic alert level to red, the highest status, triggering a shut down of all but essential businesses. But the federal government had data that should have prompted an immediate lockdown in early December. Instead, it kept the capital open for an additional two weeks.

Hospitalizations nationwide have reached levels last seen during the first peak of the outbreak in the summer. With 85 percent of beds filled in Mexico City, according to official figures, doctors are begging on social media for residents to stay home.

A study published this week by academics at Stanford University and Mexico’s Center for Research and Teaching in Economics found that, at current rates, there was a high probability that hospital capacity in the capital would be outstripped by early January 2021. The study has not yet been peer reviewed.

On Wednesday, authorities said that more than 300 health care workers from other states had arrived in Mexico City to support the capital’s beleaguered doctors and nurses.

And with Mr. Lopez Obrador’s persistent push for government austerity, Mexico remains one of the few countries in Latin America without meaningful financial aid for its citizens amid an economic downturn that could wipe 9 percent from the country’s economic output.

Given the grim outlook, Mexico has placed tremendous hope in the vaccine, which will be available free of charge nationwide. The country has contracts with both Pfizer and AstraZeneca, as well as with Chinese-Canadian firm CanSino. Vaccinations will continue through March 2022.

“We are going to guarantee this health care right, with vaccines for all Mexicans,” Mr. Lopez Obrador said at a news conference on Thursday. “We already have the budget, with the money to purchase all the doses that are required.”

Authorities have said that the country would receive 250,000 doses of the Pfizer vaccine this month, with inoculations to begin in Mexico City and the neighboring State of Mexico, which has also been hard hit by the pandemic.

Some 3,000 doses arrived from Belgium to Mexico City on Wednesday, with another 50,000 set arrive next week, the government said, with the aim of having 1.4 million doses for health workers by January and a total of 34 million Pfizer doses by December 2021.

“We are still facing a tremendous pandemic, the worst we have ever experienced, but today is the beginning of the end,” said Marcelo Ebrard, the country’s foreign secretary, at a news conference after the first doses arrived in Mexico on Wednesday. “Today we can clearly see that we are going to defeat it, this virus that has come to transform our lives.”

Public health experts cautioned that, despite the fanfare surround the first vaccination, there would be little practical impact on the soaring rates of infection and death until many more doses were widely available.

“It’s very symbolic,” said Dr. Carlos Magis Rodriguez, a physician and professor of public health at Mexico’s National Autonomous University. “There has to be a logic” to the vaccination campaign, he said, “but until now we haven’t seen that plan.”

Waiting in line at a medical supply store to buy oxygen for his father, who was sick at home with Covid-19, Luis Olivares, 40, said that while he wished the vaccine had come earlier, it’s arrival, at long last, “gives me hope for many.”

Others were less optimistic.

Alvaro Garcia, 41, was also waiting to pick up oxygen tanks for his wife, whose autoimmune disease has debilitated her lungs. Given his wife’s delicate condition, Mr. Garcia worried greatly about the spread of the virus. And the vaccine? It was too little, too late, he said.

“There are already so many dead,” Mr. Garcia said. “There’s no way to change that.” 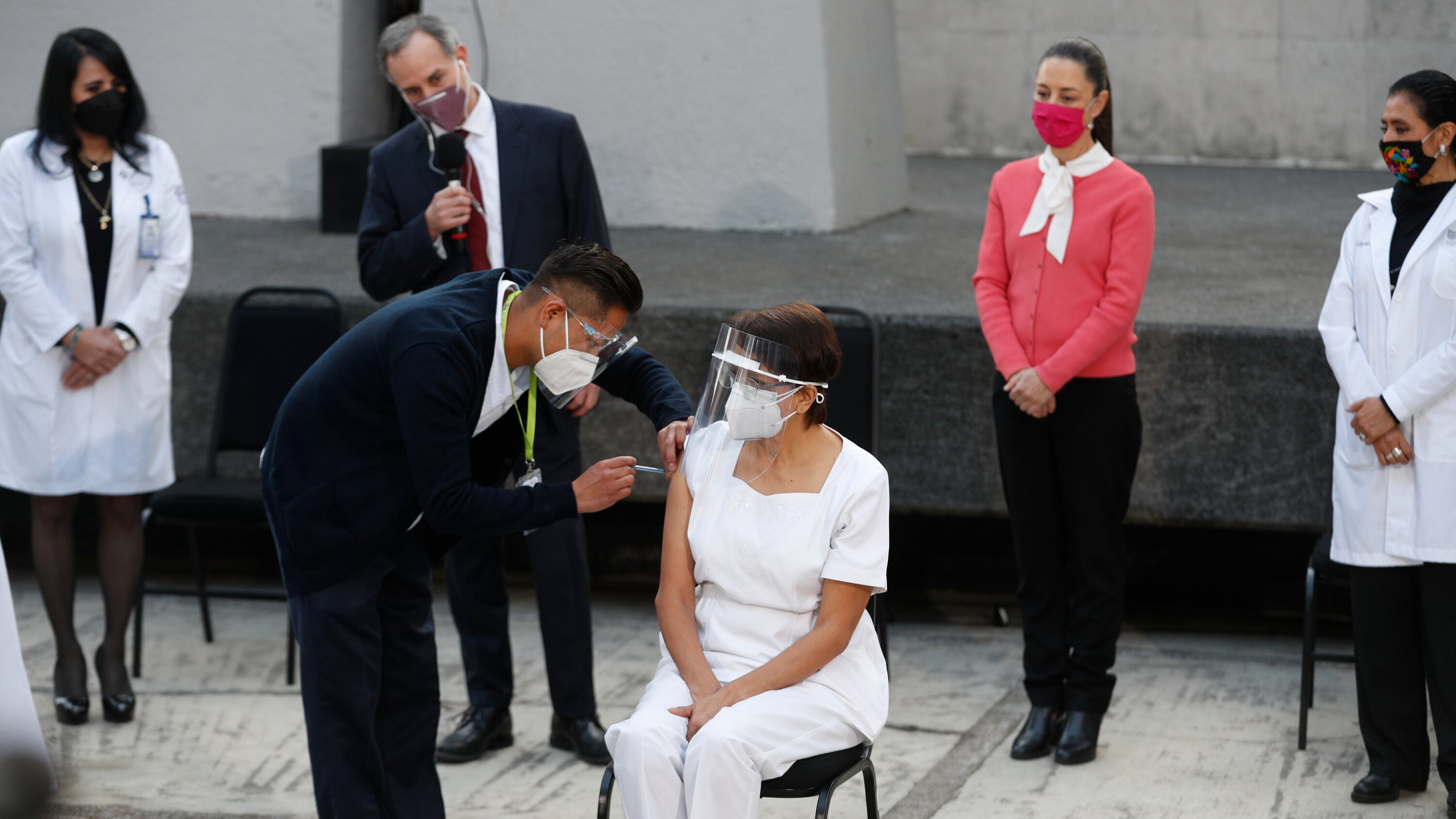