WASHINGTON — For the past month, the Navy cruiser San Jacinto had sailed off the West African island nation of Cape Verde on a secret mission aimed at helping deal a major blow to President Nicolas Maduro of Venezuela, an avowed adversary of the Trump administration.

The mission was set in motion in early June, when Alex Saab, a Colombian businessman who is widely believed to be the architect of the economic deals that are keeping the Maduro government afloat, was arrested in Cape Verde when his private plane stopped to refuel en route to Iran from Venezuela. The United States sought his extradition under American money laundering charges, and judicial proceedings began.

“Saab is critically important to Maduro because he has been the Maduro family’s frontman for years,” said Moises Rendon, a Venezuela specialist at the Center for Strategic and International Studies in Washington. “Saab has access to privileged information to Maduro’s corruption schemes in and outside Venezuela.”

The subsequent stealthy arrival of the American warship coincided with President Trump’s firing of Defense Secretary Mark T. Esper in early November. For months, Mr. Esper had fended off pleas from the State and Justice Departments to deploy a Navy vessel to Cape Verde to deter Venezuela and Iran from plotting to spirit Mr. Saab away from the island. Mr. Esper scoffed at concerns over a cloak-and-dagger jailbreak, and said sending in the Navy was a misuse of American military might. A Coast Guard cutter was dispatched in August instead.

With Mr. Esper out of the way, however, his replacement, Acting Defense Secretary Christopher C. Miller, a former White House counterterrorism aide, quickly approved the San Jacinto’s deployment from Norfolk, Va. The ship sailed across the Atlantic to keep a close eye on the lone captive.

In the waning days of Mr. Trump’s term, the tale of the San Jacinto and its unlikely monthlong mission illustrates what critics say is the administration’s capricious use of the armed forces — deploying troops to the southwestern border one day, yanking other troops abruptly from northeast Syria the next.

It is also the latest effect of Mr. Trump’s purge of the Pentagon’s top leadership and his installment of largely hard-line loyalists. With Mr. Esper gone, Mr. Miller has ordered deeper troop cuts in Afghanistan, Iraq and Somalia; ousted the policy official overseeing the military’s efforts to combat the Islamic State; and considered pulling back military support for the C.I.A., including its drone fleet.

The showdown over Mr. Saab is the latest twist in the tense relationship between the United States and Venezuela. In 2017, Mr. Trump said he would not rule out a “military option” to quell the chaos in Venezuela. In 2018, the Trump administration held secret meetings with rebellious military officers from Venezuela to discuss their plans to overthrow Mr. Maduro.

And in August, the United States seized more than 1.1 million barrels of Iranian fuel that was headed to Venezuela in a high-seas handover that blocked two diplomatic adversaries from evading American economic sanctions.

So it came as no surprise that administration aides were elated when officials in Cape Verde arrested Mr. Saab on his fuel stop, responding to a wanted alert from Interpol known as a red notice, which had been in effect because of the American money laundering charges.

In a statement at the time, Mr. Maduro’s foreign minister, Jorge Arreaza, said Mr. Saab had stopped in Cape Verde on a “necessary layover” on his way to “guarantee the obtainment” of food and medicine for Venezuela.

Mr. Arreaza condemned the detention, calling it an act “violating international norms and law” and saying that the Maduro government would do everything possible to protect “the human rights of Mr. Alex Saab.”

Threats like that worried hard-liners at the Justice and State Departments, including Elliott Abrams, the State Department’s special envoy for Iran and Venezuela. They voiced concerns that Iranian or Venezuelan operatives could help Mr. Saab escape from the archipelago 350 miles west of Senegal in the North Atlantic, and that the United States would lose an unusual opportunity to punish Mr. Maduro.

The monthslong detention of Mr. Saab has stripped Mr. Maduro of an important ally and a major financial fixer at a time when fewer countries are willing or able to come to Venezuela’s aid. If Mr. Saab cooperates with American officials, he could help untangle Mr. Maduro’s economic web of support and assist the authorities in bringing charges against other allies of the Venezuelan government.

Washington has accused Mr. Saab of “profiting from starvation” through his involvement in a scheme in which he and others are suspected of making off with large sums of government funds meant to feed Venezuela’s hungry population. American officials have said that this was part of a larger scheme in which Mr. Maduro’s allies bought less or lower-quality food than requested in contracts and redistributed extra money to loyalists.

Mr. Saab is one of several Maduro-linked officials and businessmen indicted by the United States government in recent years, including Mr. Maduro himself. The United States and more than 50 other nations view Mr. Maduro’s government as illegitimate and recognize a political rival, Juan Guaido, as the country’s interim president.

In Washington this summer, Mr. Esper held firm: Extraditing Mr. Saab was a worthy effort. But it would have to be carried out with no Navy warship. Instead, the Trump administration dispatched the Coast Guard cutter Bear to Cape Verde in August. Cmdr. Jay W. Guyer, a Coast Guard spokesman, said the Bear conducted a joint patrol with the Cape Verdean Coast Guard “to counter illegal, unregulated, and unreported fishing.” He said the Bear also participated in a search-and-rescue demonstration near Cape Verde.

When Mr. Trump fired Mr. Esper, a Navy warship for duty was back in play. And not a moment too soon, administration officials said.

Adding to the international drama, two West African countries, at the State Department’s behest, denied refueling permission last month at their airports to an Iranian plane bound for Cape Verde. Officials said it was possible that the plane was carrying Iranian spies, commandos or maybe just lawyers trying to quash Mr. Saab’s extradition. The plane flew back to Tehran.

Last week, the San Jacinto got new orders: Head back to Norfolk to ensure the 393-member crew will be home for Christmas and other holidays.

Supporters of the Navy deployment, like Mr. Abrams, voiced confidence that the San Jacinto’s presence — at an operating cost of $52,000 a day, according to the Navy’s Second Fleet — had deterred any nefarious mischief.

The Pentagon’s Africa Command did not acknowledge the ship’s clandestine mission, saying only that it was sent to Cape Verde “to combat illicit transnational maritime activity” in the region, Kelly Cahalan, a command spokeswoman, said in an email.

In the end, Mr. Esper’s worst fears — an inadvertent Navy clash with Iranian or Venezuelan operatives in a matter best suited for diplomats and international lawyers to resolve — did not come to pass.

In Cape Verde, American officials said, the extradition process continues with Mr. Saab’s appeals expected to last at least into early 2021. A lawyer for Mr. Saab did not return email requests for comment. A senior Pentagon official said no decision had been made whether to replace the San Jacinto with another Navy ship after the holidays. 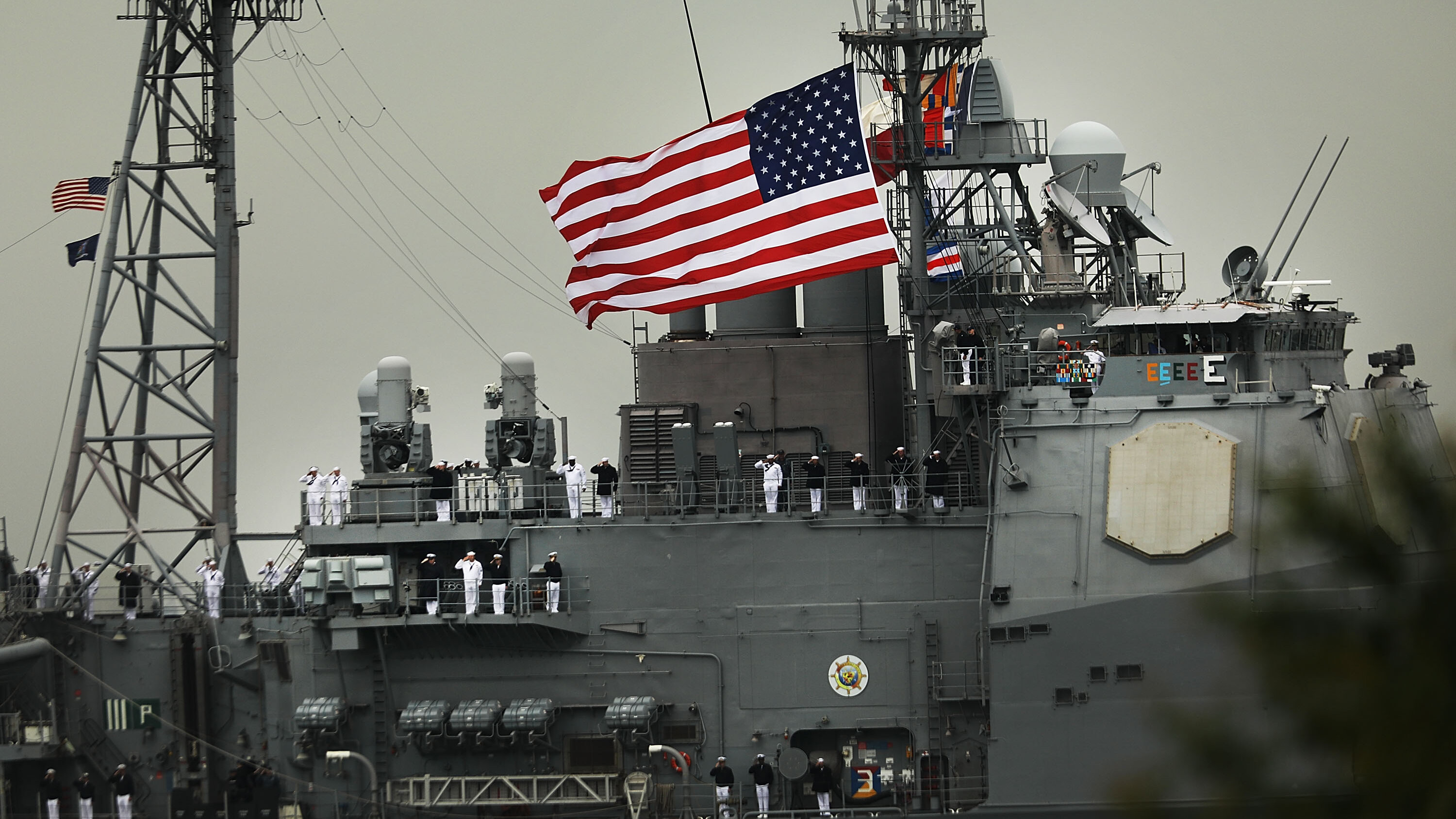