Home Sport An Olympic Dream Is Reborn, Despite Fears of Brain Trauma
Sport

An Olympic Dream Is Reborn, Despite Fears of Brain Trauma

He knew about devastating crashes in the sledding sports, particularly in his specialty, skeleton, and about the retired athletes who struggled with memory loss and an inability to perform simple activities, like reading.

He wanted to pursue his Olympic dream though, even if doing so would risk damaging his brain. So he devised a new technique for hurtling down the icy track, thinking his innovation would keep him safer.

But when Edelman made it to the 2018 Winter Olympics — competing for Israel, his adopted second country — officials there disallowed his new technique, saying it violated the sport’s rules. He finished the event in 28th place out 30 competitors and then retired, having accomplished far more than anyone could have predicted when he entered the sport three and a half years earlier, crashing on his very first run.

A Massachusetts Institute of Technology graduate, Edelman settled into pursuing a master’s of business administration at Yale. Though he played ice hockey while growing up in suburban Boston and made the team at M.I.T., sports had never been his primary calling. He seemed ready to move on.

Yet the lure of the Olympic Games can make people act in surprising ways. Parents subject their children to coaches who blur the line between discipline and abuse. Runners foolishly starve themselves to lose weight, believing lighter bodies will mean more speed.

And athletes like Edelman sign up again for repeated brain-rattling rides at 75 miles per hour, even when they have had headaches, blurred vision, dizziness, depression, exhaustion and other symptoms associated with traumatic brain injuries. And even as there is a growing awareness about a series of deaths from overdoses, suicides and lingering neurological problems that former athletes in sledding sports have experienced in recent years.

Now Edelman, who has taken a break from business school, has decided to try another sledding sport, becoming a bobsled driver and aiming to reach the 2022 Winter Games in Beijing.

“I know I am going to get hurt brain-wise doing this,” Edelman, 29, wrote in a recent text message. He also expects to spend more than $100,000 of his own money on the effort, which will mean draining his savings, borrowing what he can, seeking donors and trying to auction off his Olympic ring. “The mission is more important than my health or savings.”

The bobsled feels safer to him, he said, because he sits upright and can see where he is going. His family is still concerned. After an article about the dangers of sledding sports appeared in The New York Times this summer, Edelman texted his father, a cardiologist and a professor of biomedical engineering, asking him not to show the article to his mother.

Bobsled and skeleton are the rare exceptions, and that is part of the appeal for Edelman. They are sports with perhaps 1,000 athletes combined globally (the exact number is difficult to quantify), with little recreational participation. Many of the sports’ athletes had barely heard of bobsled or skeleton until they were adults.

Then someone — a coach, another athlete, a stranger in a gym — suggested their strength and speed, honed for years in track and field, or football or rugby, might transfer well to these little-known Olympic sports. Lolo Jones, the standout hurdler, competed in bobsled at the 2018 Winter Games and is trying for 2022.

There are only 16 bobsled tracks in the world. Four are in Germany, and many of the others are in remote mountain towns, which helps make sledding sports among the most inaccessible in the world. Also, sleds are expensive, about $40,000 for a used model and $100,000 for a new one.

And yet that inaccessibility is what ultimately makes elite-level participation accessible. Because almost no one outside Germany grows up as a bobsledder, someone like Edelman can share a world-class distinction with Michael Phelps — being an Olympian.

“There is a big expense and you have to get to a place where there is a track, so these aren’t the easiest sports to get into, but almost anyone can try it,” said David Greaves, who became an Israeli citizen two decades ago and leads Bobsled/Skeleton Israel, the national governing body, from his home in Canada. “It’s doable if you have decent athletic ability and you are in some ways fearless, because very few people get on the sled a second time.”

Edelman was eligible for Israeli citizenship because he is Jewish, and he had fallen in love with the country during a high school trip there.

In 2014, Edelman realized he had a shot at becoming an Olympian by representing Israel in a sledding sport. A Mediterranean country that is half-desert, Israel had never had an athlete compete in Olympic bobsled, skeleton or luge (feet-first sledding) and barely funds those sports.

Learning technique from YouTube videos, Edelman took as many skeleton runs as he could to make up for lost time, sometimes hurtling down the track nine times in a single day. That volume of training is three times what most experienced athletes endure. Many of the sport’s coaches and officials now acknowledge that excessive daily training runs increase the likelihood of brain injuries, even if crashes do not occur.

In 2018, two years after becoming an Israeli citizen, Edelman qualified for the Olympics in South Korea, Israel’s first Olympic competitor in skeleton. Edelman mitigated the risks of brain injury by using a longer face shield that allowed him to rest his head on the sled, limiting the chances that his head would bang off the ice as gravitational forces spiked around tight turns.

He used the technique in several World Cup races, but a last-minute ruling by skeleton officials in South Korea prevented him from using it in the Olympics. He beat only athletes from Jamaica and Ghana.

Heartbroken, Edelman fell into a deep depression. Doctors told him the excessive training had probably exacerbated it.

“It is possible that multiple head strikes have played a role in increased neuropsychiatric symptoms e.g., impulsivity, mood swings,” Mary-Ellen Meadows, a neuropsychologist at Brigham and Women’s Hospital in Boston, wrote in October 2018 after evaluating Edelman. He has committed to donating his brain upon his death to Boston University’s Concussion Legacy Foundation.

Then, late last year, his depression and other lingering effects of skeleton training abated, and he felt the pull of the Olympic rings again. He impressed an Australian coach during a trial bobsled run. The coach told Edelman if he trained hard and found some strong, fast teammates to push the sled, he could qualify for the next Winter Olympics.

Edelman recruited three Israeli Arabs who play for the national rugby team to push the bobsled and tuck behind him for the 50-second runs down the ice.

The men, Amir and Ward Fawarsy, who are cousins, and Moran Nijem, are students at the Wingate Institute for Physical Education and Sports in Netanya, a seaside city in Israel. Until this month, they had yet to ride in a bobsled or see a track in person.

Much of what they knew about the sport before they met Edelman they learned by watching “Cool Runnings,” the 1993 movie loosely based on Jamaica’s bobsled team at the 1988 Winter Olympics.

As Olympic narratives go, the story of the Israeli bobsled team is seductive. Representing a nation torn by religious and ethnic conflict for more than 60 years, three Arabs and a Jew are coming together, potentially on the biggest stage in sports.

Nijem and the Fawarsy cousins joined Edelman in late December in South Korea, where Edelman has been working on his driving skills. Edelman plans to have more than 200 practice runs by the end of the season — which would mean two to three runs a day three or four days a week through the winter.

Qualification is hardly guaranteed for the Israeli team, especially with the coronavirus pandemic limiting travel and making it more difficult for sleds to achieve the necessary number of races and quality performances to make it to the Olympics.

Nijem said he was not worried about the potential danger of getting into a sled with a novice driver still learning how not to flip a 200-pound sled on a treacherous curves.

“If A.J. crashes, we still trust him,” he said in an interview last month.

“We are rugby players,” Amir Fawarsy added. “We know all about concussions.” 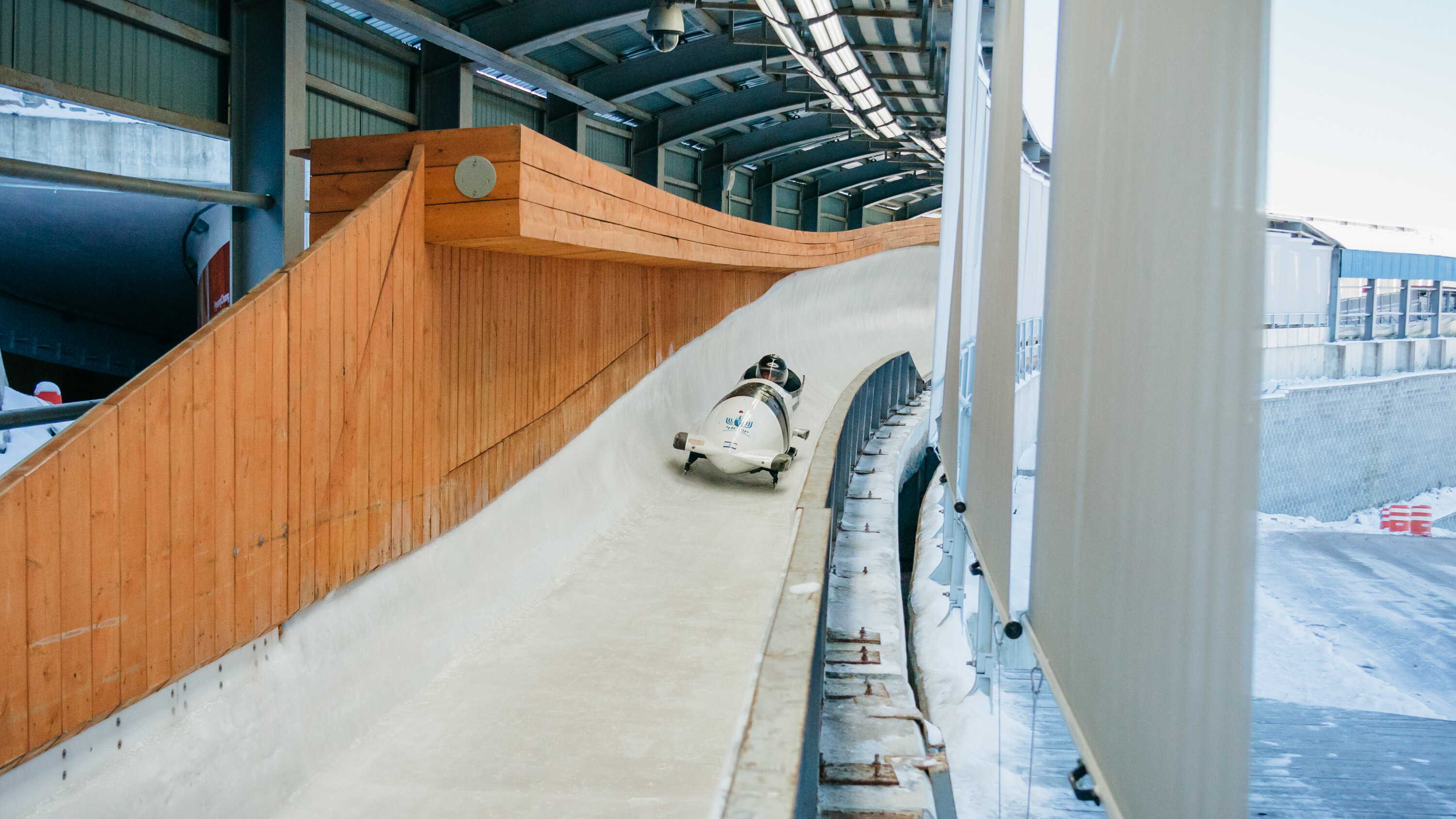