Argentina Legalizes Abortion, a Milestone in a Conservative Region

BUENOS AIRES — Argentina on Wednesday became the largest nation in Latin America to legalize abortion, a landmark vote in a conservative region and a victory for a grass-roots movement that turned years of rallies into political power.

The high-stakes vote, during 12 hours of often dramatic debate in the Senate, gripped the nation and exposed the tensions between a conservative society long influenced by the Roman Catholic Church, and a more secular generation that is fired up by a growing feminist movement.

Now, she added, for all the women who fought for those legal rights and more, “let it be law.”

The effects of the legalization vote are likely to ripple across Latin America, galvanizing abortion-rights advocates elsewhere in the region. The symbol of that effort in Argentina — green handkerchiefs — has begun showing up in other countries where women have poured into the streets demanding greater support for their rights.

Argentine groups that had worked against the abortion legislation, with the active support of Pope Francis, vowed not to give up.

“This doesn’t end here,” said Ana Belen Marmora, an activist in the anti-abortion group Youth Front. “We will not allow our voices to be ignored like this.”

As she spoke, a sonogram was carried out on a pregnant woman on a stage as people cheered: “Long live life!”

But the mood outside the neo-Classical Palace of Congress, where tens of thousands gathered while the bill was being debated into the early hours, was one of elation. Many in the crowd were part of a grass-roots effort that had made a concerted push for women’s rights, and focused on abortion access as its main goal.

When news came that the bill had been approved by a wider-than-expected margin — 38 to 29, with one abstention — supporters turned the night into a celebration alive with music and dancing, tears and wildly waving green handkerchiefs.

Others felt a profound sense of awe for the years of activism — the marches, the online campaigning, the slow change of public opinion — that culminated in this moment, and grief for the women who were lost to unsafe abortions along the way.

“I’m very emotional for all those who couldn’t be here today,” said Aracelli Orellana, 29, an office worker who had a friend, Marisa Sanchez, who died from a clandestine abortion when she was a high school student.

The mood was markedly different on the other side of Congress, where opponents of legalization were gathered in smaller numbers than two years ago, when the Senate had considered and rejected a similar bill.

Just hours before the Senate took up the measure on Tuesday afternoon, the pope, who is Argentine but has sought to distance himself from political debates in his homeland, issued a message that appeared to speak to the issue.

“The Son of God was born an outcast, in order to tell us that every outcast is a child of God,” he wrote on Twitter. “He came into the world as each child comes into the world, weak and vulnerable, so that we can learn to accept our weaknesses with tender love.”

Argentina’s president, Alberto Fernandez, has promised to sign the bill into law, making it legal for women to end pregnancies for any reason up to 14 weeks. After that, there will be exceptions allowed for rape and the woman’s health. In public hospitals, the procedure would be free of charge.

Mr. Fernandez was a powerful backer of the measure, but the bill’s approval owed much of its success to the years of work by Argentina’s grass-roots women’s rights advocates.

The largely leaderless movement has recently paved the way for other deep shifts in the country’s cultural and political landscape — including marriage equality, gender parity initiatives and transgender rights — and made Argentina a bellwether of changes that have gained broader traction in Latin America.

The effort to loosen Argentina’s abortion laws became a primary goal for the feminist movement Ni Una Menos, or not one woman fewer, which formed in 2015 to protest violence against women in the country and has since spread across Latin America.

Uruguay, Cuba and Guyana are the only other countries in Latin America to allow abortion without restriction in early pregnancy. Argentina, like a number of other countries in the region, had previously permitted abortion in cases of rape or if the pregnancy posed a risk to a woman’s health. Although legal, abortions in these cases were often difficult to secure.

Other Latin American countries, including El Salvador and Honduras, have stricter limits or total prohibitions, with zealous prosecution of women whose pregnancies don’t end in a live birth. Women who miscarry often fall under suspicion, and those convicted of having abortions can be sentenced to decades in prison.

“Legalizing abortion in Argentina is a gigantic victory that protects fundamental rights and will inspire change in Latin America,” said Tamara Taraciuk Broner, the Americas deputy director for Human Rights Watch. “It’s predictable, however, that this will also mobilize pro-life groups.”

Argentina’s legalization of abortion was a setback not just for the Catholic Church, but also for the country’s fast-growing evangelical Protestant churches, which had joined forces with the Catholics in opposing the change.

Catholic and evangelical leaders had called on supporters to observe a day of prayer and fasting on Monday to reflect on “the killing of so many innocent children.” Church leaders have been working throughout the year to activate the faithful, and large anti-abortion marches have taken place across the country.

But in Argentina, as in several other countries, rising secularism, particularly among the young, has diminished the church’s long-held sway, and lowered the barriers for advancing liberal causes.

The vote was a major legislative victory for Mr. Fernandez, Argentina’s center-left president, who had campaigned on a platform that included abortion rights, gender equality, and gay and transgender rights.

Argentina’s lower house, the Chamber of Deputies, had passed a similar measure two years ago, only to have it fail in the Senate, 38 to 31. The president at the time, Mauricio Macri, said he was personally against legalization but vowed not to veto the bill.

Mr. Fernandez, and some other politicians who supported the measure, said they approached the issue not as a moral or as a religious one, but as a matter of public health.

Researchers say hundreds of thousands of underground abortions are performed in Argentina every year. Around 40,000 women were hospitalized for complications related to abortions in 2016, according to the latest available data from the Health Ministry, while at least 65 women died between 2016 and 2018 from complications, according to a report by Argentina’s Access to Safe Abortion Network.

Legalizing abortion would bring the practice out of the shadows, said Senator Norma Durango. “Abortion is a reality, and it has been taking place since time immemorial,” she said.

Mr. Fernandez, a law professor who has long supported legalizing abortion, made the issue an early legislative priority once he took office at the end of 2019.

The decision entailed political risks, as he took the reins of a troubled economy that has been in recession for two years. and then, soon after taking office, he ordered one of the strictest coronavirus lockdowns in the world.

But Mr. Fernandez and his vice president, Cristina Fernandez de Kirchner, came to see abortion as one of the few items on their agenda they could advance amid a torrent of challenges.

Ms. Kirchner, who led Argentina as president from 2007 to 2015, opposed legalizing abortion during most of her political career. Her position shifted in the lead-up to the vote in 2018, when tens of thousands of women demonstrated across Argentina in support of making access to abortion early in the pregnancy legal. Ms. Kirchner, who was then a senator, has said her daughter played a key role in changing her mind.

“Through our years of activism, we’ve managed to get people to change their positions,” said Celeste Mac Dougall, an abortion rights advocate. “Cristina Fernandez de Kirchner is the most obvious example that opinions can change.”

As the sun rose over Buenos Aires, and streets started to empty out, some activists continued dancing, in no rush to end the celebration. And many said they intended to continue their fight for equality.

“This is the floor and not the ceiling,” said Julia Cicuttia, 29, a psychologist who had been campaigning to legalize abortion for eight years. “Now we will have to keep fighting to continue expanding our rights.” 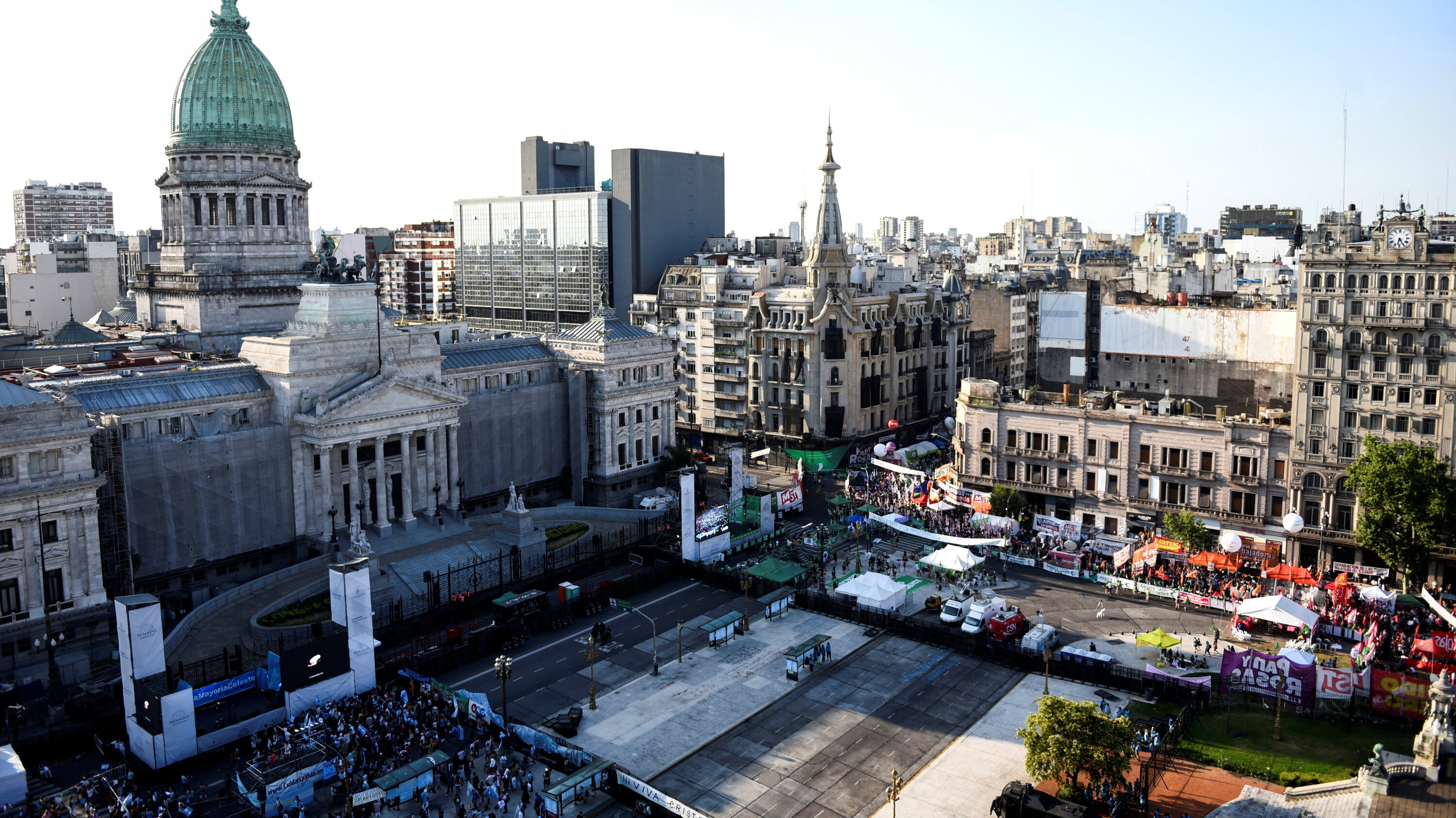