Though 2020 is nearly over, it keeps turning out sports milestones. On Wednesday night, for the first time, a woman served as head coach in an N.B.A. game.

When Spurs Coach Gregg Popovich was ejected after arguing with a referee in the second quarter of a game with the Los Angeles Lakers in San Antonio, he turned to his assistant Becky Hammon and indicated that she should take over the team.

“He officially pointed at me,” Hammon said. “That was it. Said, ‘You’ve got them.’ Obviously, it’s a big deal. It’s a substantial moment.”

“It was business as usual,” she added. “They’re used to hearing my voice in practice. In practice, Pop will put us in two teams and we’ll each have a team. So they’re kind of used to hearing me out there, seeing me draw a play on the board or whatnot.”

Although not much was made of the milestone during the game, which the Lakers won, 121-107, reaction poured out afterward.

“It’s a beautiful thing just to hear her barking out calls, barking out sets,” said LeBron James of the Lakers. “She’s very passionate about the game. So congrats to her, congrats to our league.”

Hammon, 43, was undrafted out of Colorado State but played for 16 years in the W.N.B.A., where she was a six-time All Star. After being passed over for the United States Olympic team, she represented Russia, where she had also played professionally, in the 2008 and 2012 Games.

On her flight home from the 2012 London Games, Hammon’s seatmate was Popovich. She recalled that he asked her, “So if you were an assistant for me and I asked you something, you’d tell me the truth?”

She replied, “I don’t know why else you’d ask if you didn’t want me to tell the truth.” He answered, “Good, I don’t want a bunch of yes men.”

In 2013, Hammon tore the anterior cruciate ligament in her left knee, abruptly ending her W.N.B.A. season. While she rehabbed, she served as a coaching intern with the Spurs. And in 2014, Popovich hired her as the first full-time female assistant coach in the league.

At the time, she said of Popovich: “Honestly, I don’t think he gives two cents that I’m a woman. And I don’t want to be hired because I’m a woman.” She was head coach of the Spurs’ Las Vegas Summer League team three times, winning the title in 2015.

Hammon’s trailblazing in the league has prompted speculation that she will one day be a head coach, and she has been reported to be a candidate for several top jobs in the past, most recently the Indiana Pacers.

“The future is bright for her,” said Dejounte Murray of the Spurs after the game. “I hope she just sticks to it and doesn’t give up. One day it may happen, it may not happen, who knows, but she’s definitely on the right road.”

Hammon sought to keep the focus on her duties.

“I’m just in the moment with the guys,” she said. “Trying to figure out what’s the best way to help them.” 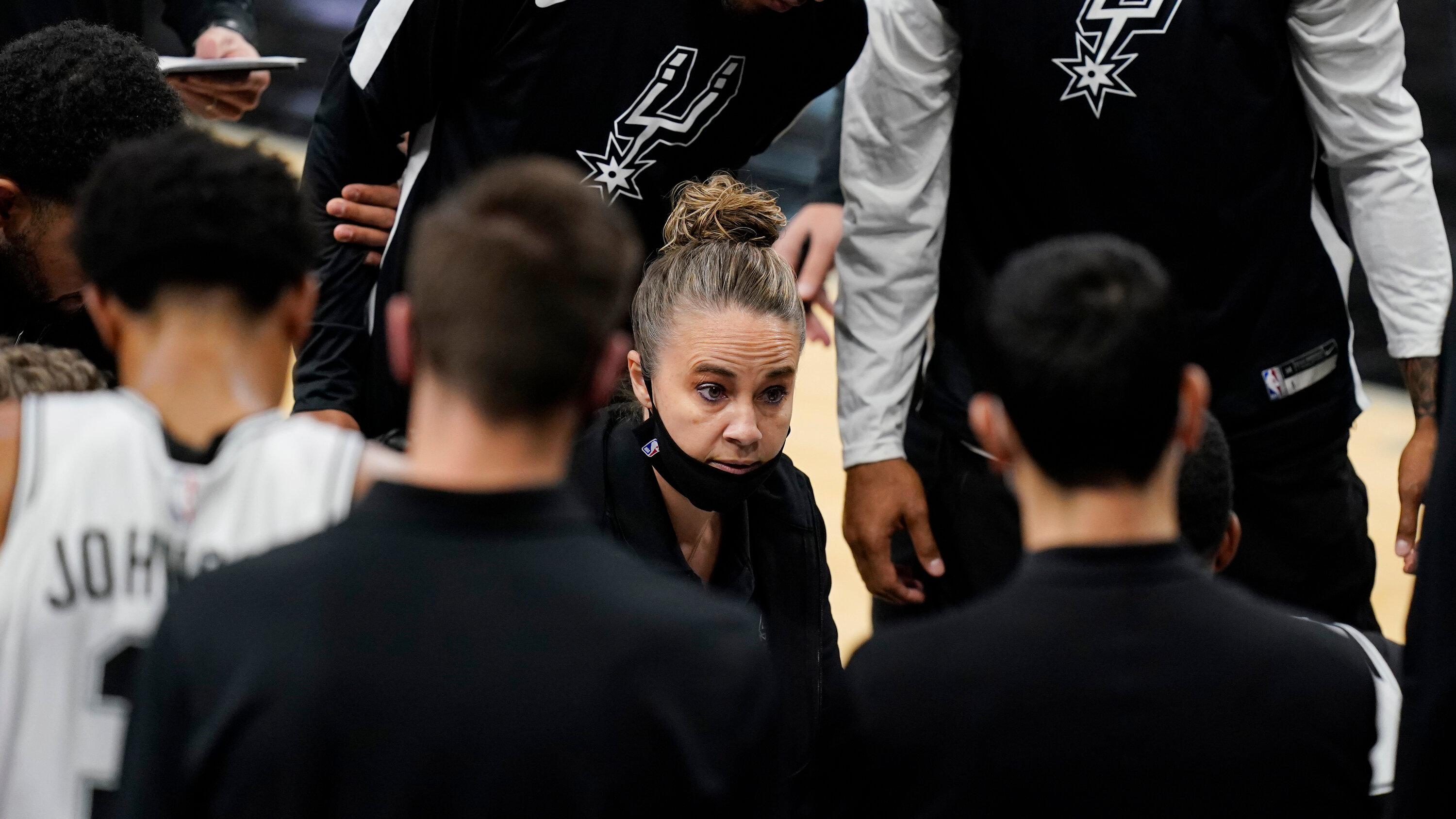