Home Racing Brazil Is Famous for Its Meat. But Vegetarianism Is Soaring.
Racing

Brazil Is Famous for Its Meat. But Vegetarianism Is Soaring.

RIO DE JANEIRO — After years of whipping up large vegan meals for an ashram in the mountains outside Rio de Janeiro, Luiza de Marilac Tavares found her life upended, and herself out of a job, when the pandemic forced the center to shut down.

She started cooking from home, hoping to make ends meet by taking orders from people she knew. Instead, orders for her exquisite fare soared: With a little Instagram marketing, she had inadvertently tapped into Brazil’s booming demand for plant-based food.

The country, which is the world’s largest beef exporter, has seen a dramatic shift toward plant-based diets. The number of self-declared vegetarians in Brazil has nearly doubled over a six-year period, according to a poll by the research firm Ibope; 30 million people, or 14 percent of Brazilians, reported being vegetarian or vegan in 2018.

Ms. Tavares, a Hare Krishna who describes cooking as a sacred act that brings her closer to God, says, “There is a shift of consciousness underway.”

But the surge in demand extends well beyond the namaste set.

Mainstream supermarkets now stock foods made from plant-based protein next to its meat, poultry and fish. And in the toniest neighborhoods of major capitals, eateries that devote as much attention to atmosphere as they do to the menu serve up inventive, meatless dishes to a casually hip crowd.

This transformation has turned the nation of 212 million people — globally renowned for all-you-can-eat steakhouses and increasingly under siege for the carbon footprint of its cattle ranches — into a powerhouse for plant-based food innovation.

Brazilian plant-based food start-ups have seen soaring demand since animal-based protein analogues first became widely available in 2019 in supermarkets and restaurants. Their founders predict that within a few years consumers won’t be able to tell the difference between a burger patty from a cow and one produced with pea protein, beet juice and potato starch.

The shift away from animal-based protein is mainly being driven by health concerns, experts say. Obesity, diabetes and cardiovascular disease increased in Brazil in recent years as people adopted more sedentary lifestyles and junk food became increasingly cheap and accessible.

Rising deforestation, much of which is driven by the meat industry, and an increasingly visible animal rights movement, are secondary factors pushing Brazilians to reduce or phase out animal products from their diets.

A few years ago, giving up meat was unthinkable for the vast majority of Brazilians. Feijoada, the national dish, is a stew made with beans and pork. Weekend outdoor cookouts in which families and friends gather for hours over generous spreads of steak, chicken and sausage are a revered ritual across the country.

“Eating is the most cultural thing that exists,” said Gustavo Guadagnini, the managing director at the Good Food Institute Brazil, which supports the companies producing plant-based alternatives. “It’s about the region you’re from, the family recipes.”

Until recently, Mr. Guadagnini said that suggesting that Brazilians stop eating meat meant asking them to give up a core part of their identity.

“Now we’re offering the same food people are used to eating, but in a way that relies on new technologies,” he said. “They can make the choice without much difficulty.”

Proponents of vegetarian and vegan diets in Brazil have urged people to start with small changes, such as meatless Mondays.

Sandra Lopes, the managing director of Mercy for Animals, oversees a team that does undercover investigations into abusive practices at food farms. But in addition to those conventional name-and-shame tactics, Mercy for Animals has found considerable success enlisting school districts and companies interested in reducing the amount of animal meat they serve.

Several public schools around the country have agreed to reduce animal-based protein by 20 percent, usually by eliminating it entirely one day per week, Ms. Lopes said. That exposes children to vegan alternatives from an early age and gives local officials the satisfaction of supporting a segment of the food industry that is operating more sustainably.

“We are not making a radical request,” Ms. Lopes said. “And kids like the food that is being served.”

Groups like Mercy for Animals, which opened a Brazil office in 2015, have found powerful allies among some of the country’s biggest celebrities.

Anitta, one of Brazil’s top recording artists, says she has drastically reduced her meat consumption out of concern for the environmental impact.

Felipe Neto, a video blogger and entrepreneur with more than 40 million subscribers on YouTube, announced last year that he was becoming vegetarian as Brazil drew global outrage over an unusually destructive fire season in the Amazon.

“You know that feeling when you’ve been doing something wrong, you knew it was wrong, and its consequences weighed on your conscience,” he said last year, explaining his decision.

The most militant vegan celebrity in Brazil is the television host Xuxa Meneghel, whose daytime variety show was a sensation across Latin America in the 1990s. Ms. Meneghel, 57, has credited her vegan diet with boosting her energy level and her libido. But she said watching documentaries like “Cowspiracy” and “What the Health” convinced her that eating animals was not only unhealthy but unconscionable.

“I would urge people to reconsider that custom of celebrating birthdays and gatherings with friends with dead animals on a plate,” she said in an email. “I would really like to see people reducing their consumption of cadavers.”

Companies that have relied on Brazilians’ love of meat have taken note of the shift in views and appetites and have begun elbowing into the increasingly crowded plant-based marketplace.

Outback Steakhouse, one of the most popular chain restaurants in Brazil, early this year launched a burger made with broccoli and cauliflower.

Brazil-based JBS, the world’s largest meat-processing company, which has come under fire for its role in illegal deforestation in the Amazon, last year launched a line of plant-based products that are marketed as having the same texture and taste as meat.

The company says expanding this sector is the only way to sustainably feed humans in coming decades.

“The world will have nearly 10 billion people in 2050, so the demand for food will increase and it will be necessary to offer alternatives,” the company said in an emailed statement. “JBS’s plant-based protein strategy seeks to offer new alternatives to consumers, whether they are vegan, vegetarian or flexitarian.”

Marcos Leta, the founder of Fazenda Futuro, which in 2019 became the first major Brazilian start-up to sell plant-based meat-like products in grocery stores, has studied the country’s meat industry supply chain and its export models and believes Brazil has the potential to become a major plant-based food exporter.

Mr. Leta likes that his products are displayed in supermarkets alongside packets of frozen chicken breast and ribs. He says it is a only matter of time before he and his competitors can produce at a scale that makes their products competitive with cheap meat and chicken.

“My competition is butchers,” said Mr. Leta, who said he eats meat these days mainly as part of research and development efforts to bring the taste and texture of his food closer to the original. “The mission of the company is to, at some point in the future, make meatpacking plants obsolete.”

Mr. Leta said his company is making progress toward that goal. He recently began exporting his products, which include imitations of meatballs, ground beef and sausage, to Holland. He has signed deals for distribution in the United Kingdom, Germany and several countries in Latin America.

Ms. Tavares, 61, who has been working long hours to churn out some 400 meals per week with help from cooks at the Hare Krishna temple in Rio de Janeiro where she worships, rolls her eyes at the mention of these new companies striving to create meat imitations.

But she concedes they may be a steppingstone for many toward discovering the richness and pleasure she has found in cooking and eating plant-based meals that look, and taste, like plants.

“When you become vegetarian, it’s like a key has turned,” she said. “You begin to see things differently.” 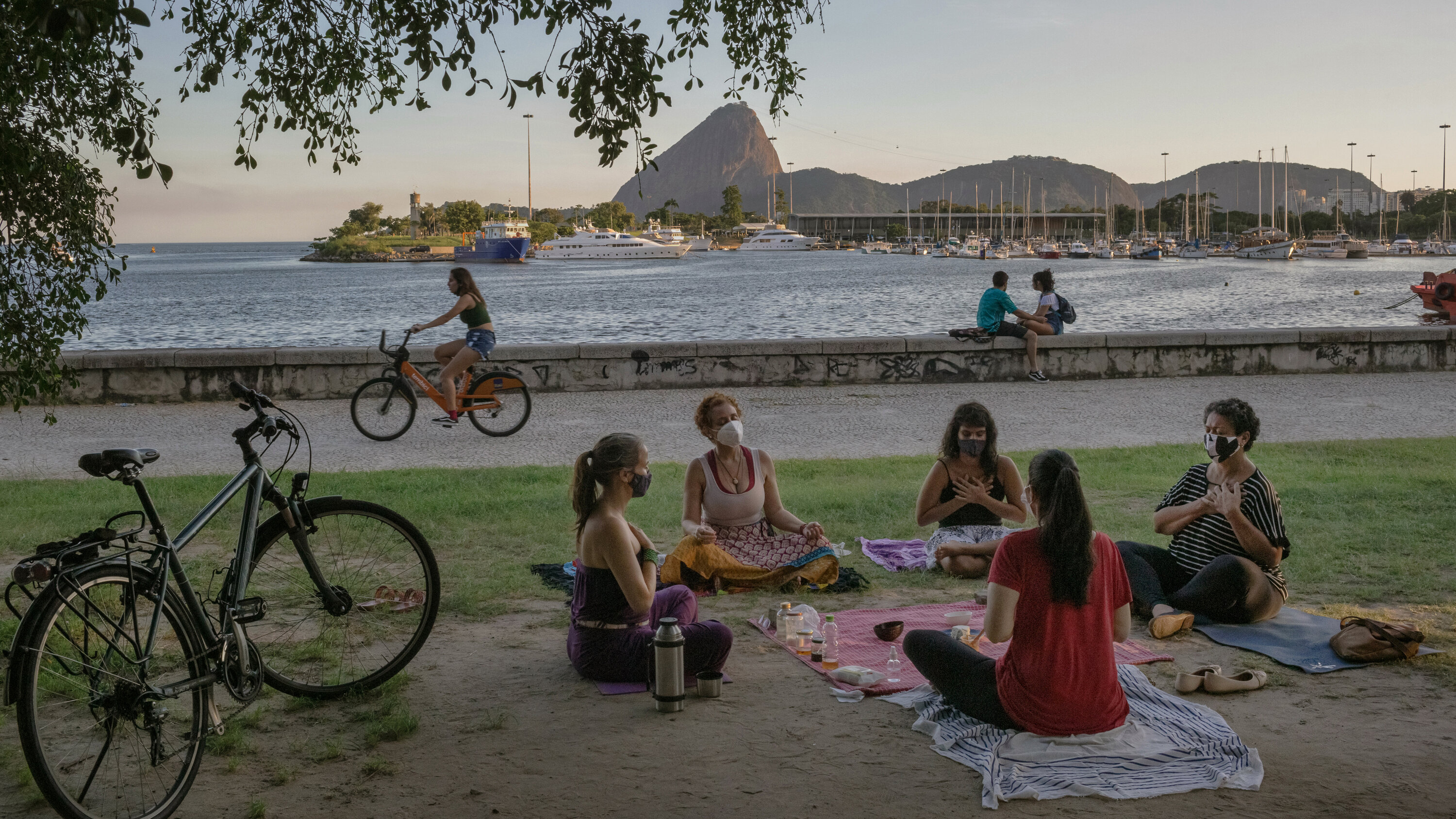