Legal Abortion, Once a Long Shot in Catholic Argentina, Now Within Reach

BUENOS AIRES — A vote to legalize abortion in Argentina was balanced on a knife’s edge Tuesday as the Senate debated a bill that would make this largely Catholic nation, homeland of Pope Francis, the largest in Latin America to take that step.

Legalization in Argentina would reverberate across a region where powerful forces oppose abortion, notably the long-dominant Roman Catholic Church and the fast-growing evangelical Protestant churches.

With the bill having cleared the lower house of Argentina’s Congress and the president vowing to sign it, all eyes were on the Senate, where its fate appears to rest in the hands of a handful of lawmakers who remain undecided or are keeping their positions under wraps.

As crowds on both sides of the issue gathered on the plaza and streets outside Congress, senators began debating the measure Tuesday afternoon, and the too-close-to-call vote was expected early Wednesday. The bill would allow abortion on request up to 14 weeks into pregnancy, with exceptions to the limit in cases of rape or health risk.

A growing and increasingly vocal feminist movement in Argentina and across Latin America known as Ni Una Menos, meaning not one woman less, has coalesced around the issues of abortion and violence against women, and has been the driving force behind the Argentinian legalization movement. Adding fuel to that effort have been the waning influence of the church and the election last year of a center-left president, Alberto Fernandez.

But the legalization movement still faces fierce opposition from the Roman Catholic Church and evangelical protestant churches. Pope Francis has spoken out against it, publicly praising a women’s group from impoverished neighborhoods for their activism against abortion.

Argentina would join Uruguay, Cuba and Guyana as the only countries in Latin America to allow abortion on request. Now, Argentina, like a number of other countries in the region, permits it in cases of rape or if pregnancy poses a risk to a woman’s health; still other countries have stricter limits or total prohibitions.

Argentina’s Chamber of Deputies approved the abortion bill earlier this month, by a vote of 131 to 117. It approved a similar measure two years ago, by just four votes, only to have it fail in the Senate, 38 to 31; the president at the time, Mauricio Macri said he was personally against legalization but vowed not to veto the bill if it was approved.

Mr. Fernandez campaigned for the presidency on a platform that included abortion rights, gender equality and gay and transgender rights, and has followed through on those promises to a degree that has surprised even some of his supporters.

The president introduced the current legalization bill, and he, the vice president and many members of the executive branch have been working to bolster support for the measure. “The government has really done its homework,” said Mariela Belski, the head of Amnesty International in Argentina.

The efforts of Mr. Fernandez and the election of some new abortion rights lawmakers, have raised their allies’ hopes that the Senate will reverse its vote of 2018.

“We are optimistic, but not triumphalist,” said Elizabeth Gomez Alcorta, Argentina’s minister of women, gender and diversity.

The known voting intentions of senators indicate a virtual tie, according to an estimate by Amnesty International, which will likely make the evening a nail-biter for opponents and supporters. Two senators who were expected to oppose legalization are unlikely to take part: Jose Alperovich is on leave after he was accused of sexual assault and former President Carlos Menem, who is 90, has been hospitalized.

Adding to the potential drama, Cristina Fernandez de Kirchner, the vice president, would cast the deciding vote in the case of a tie. Ms. Fernandez, also a former president, had long opposed legalizing abortion, but said that the burgeoning women’s rights activism in Argentina, led largely by young women who have taken to the streets in droves to support the measure, had changed her mind.

Some of those who oppose legalization decried the pressure being exerted by the executive branch, and said the country’s focus should be on other issues at a time when the coronavirus pandemic has plunged an already weak economy deeper into uncertainty.

“The vote is very tight and we are extremely disgusted by how this has turned into a political game,” said the Rev. Ruben Proietti, the head of the Christian Alliance of Evangelical Churches of the Argentine Republic. “We can’t believe this is a priority with all the problems that the country has right now.”

As abortion-rights activists have become more organized in the two years since the bill failed in Congress, so have those opposed to the practice. The Catholic and evangelical churches, which operated independently to defeat the legalization vote two years ago, have joined forces this time.

“We have been in talks from the beginning,” Mr. Proietti said.

Surveys show that Argentina is one of the most secular countries in Latin America. More than 60 percent of Argentines consider themselves Catholic, a figure that has been declining for decades, but many of them are nonpracticing, and nearly one-fifth of the population has no religious affiliation.

Activists on both sides of the abortion issue surrounded Congress Tuesday to make their voices heard. Barriers were set up to prevent conflict.

Both sides intend to settle in for a long night, as they wait for a decision likely to have great repercussions in their own country and across Latin America.

“Evangelical leaders in several countries are on the alert about what will happen in the Senate,” Mr. Proietti said. “What happens in Argentina is often replicated across the region.” 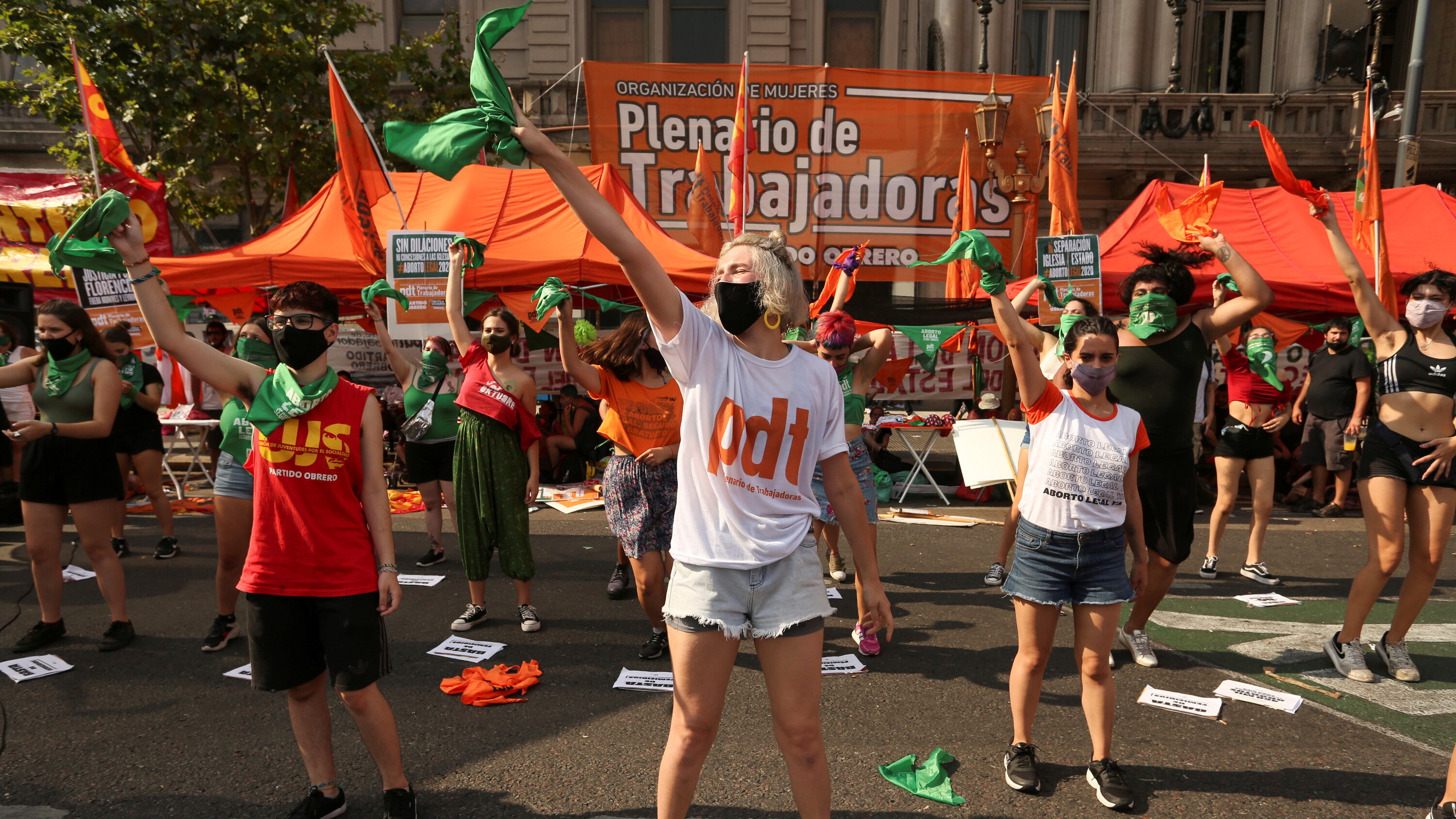