Home Racing With a Fortifying Soup, Haitians Share Their Pride in Independence
Racing

With a Fortifying Soup, Haitians Share Their Pride in Independence

To make soup joumou, the chef Wesly Jean Simon insists, you must first find the biggest pot in your kitchen.

“You cannot make a small pot of soup joumou,” he said, as there are so many components to the aromatic, orange-yellow squash soup, and it is meant to be shared with others.

Mr. Jean Simon was getting ready for Haitian Independence Day, Jan. 1, when he’ll prepare and serve the dish — free and safely, in disposable cups — to anyone who stops outside his Haitian restaurant, Zanmi, in Prospect-Lefferts Gardens, Brooklyn.

For Haitians, liberation and soup joumou go hand in hand. Under French colonial rule in the 17th and 18th centuries, enslaved Africans in Haiti were forced to cultivate squash, which grew abundantly on the fertile land. According to Laurent Dubois, a professor of romance studies at Duke University and a leading historian of Haiti, there are slightly differing opinions on the soup’s origins, but a popular story goes that the soup the enslaved Africans made with this squash was reserved only for their oppressors. When Haitians won independence on Jan. 1, 1804, the culmination of the Haitian Revolution, they celebrated with soup joumou, a symbol of the foods that had been forbidden to them.

The tradition continues today in Haiti and its diaspora, with festivities often beginning with a get-together the evening before, and continuing with another celebration on Jan. 2, known as Ancestors’ Day (Jour des Aieux in French, and Jou Zanset Yo in Creole) — honoring Haitian revolutionaries like Jean-Jacques Dessalines, Toussaint L’Ouverture and Henri Christophe.

Mr. Jean Simon, 42, who grew up in the Cite Simone (now Cite Soleil) area of Port-au-Prince, can’t remember a new year that has gone by without his eating soup joumou. Three years ago, he nearly skipped the tradition because he was working a busy shift as a sous-chef at the Hard Rock Cafe in Times Square — until a cousin dropped off a bowl for him at the restaurant.

Now that he has his own restaurant, just outside Brooklyn’s Little Haiti, he does for the neighborhood what his cousin did for him on Jan. 1. His Independence Day celebration usually starts with a party the night before at the restaurant, where the soup is served around 4 a.m.

Because of the coronavirus, Mr. Jean Simon won’t be having the big party this year. But he is one of many Haitians planning safe ways to distribute soup joumou to their communities.

The annual ritual “is a reminder that even though we are not home, we have something to hold onto our culture and bring all of us back together,” he said. “We can invite all the people to understand our culture and what the day means to us.”

In the new book “Black Futures,” by Kimberly Drew and Jenna Wortham (a New York Times staff writer), the activist and writer Zoe Samudzi noted: “Haiti was the world’s first liberated Black nation, and her freedom in 1804 became a blueprint for Black insurrection and self-determination on both sides of the Atlantic Ocean.” The Haitian Revolution inspired uprisings by enslaved people in other parts of the world, including the United States, and contributed to the ending of the slave trade.

This is why Manie Chery, 39, who hosts a YouTube series called “Love for Haitian Food” believes the holiday should be more widely acknowledged. “Anyone who is against oppression and stands for justice and freedom for all people should be proud, and celebrate that first victory for enslaved Africans against their oppressors.”

For those who observe Haitian Independence Day, preparation of soup joumou often begins the day before and sometimes even earlier. The variety of squash used, the calabaza — also known as the Caribbean pumpkin, or giraumon — is known for its intense flavor, which comes through in the soup. Traditional versions of the dish include that squash, along with beef marinated in epis seasoning, a verdant mixture of alliums, peppers and herbs; a varying assortment of vegetables, like carrots, celery, yams, potatoes and cabbage; and pasta.

Mr. Jean Simon said it’s important to add the ingredients in stages, starting with the meat and ending with the pasta, so “nothing breaks down and you can taste every item in the bowl.” The result, he added, should be “savory, with an underlying sweet” flavor.

Making soup joumou is a long process, and a skill acquired over many years, said Rose Michel, the owner of Belmere Catering in Miami. “It is not something you can just get off and say today, ‘I know how to make soup joumou,’ because you will be criticized.” Every family, she said, has its own variation — a specific variety of pasta, the addition of other vegetables — and opinions on what does and doesn’t belong in the soup.

Ms. Michel, 36, who grew up across all five boroughs of New York City, remembered that her aunt stayed up all night on Dec. 31 to make the soup. Relatives Ms. Michel hadn’t seen all year would visit one another’s homes, eating soup at every stop.

“No matter whose Haitian household you are going to be at, it is cooked,” she said. “It doesn’t matter who is quarreling.” When eating soup joumou, people put their differences aside.

The soup has sustained Ms. Michel beyond Independence Day. Her family ate it on any special occasion, from christenings to Christmas, and it was served at both of her parents’ funerals. When she lived in a homeless shelter at age 28, she made the soup for her peers, “to brighten up their days.”

Soup joumou “helped save my life,” she said.

In 2015, she began an annual Haitian Independence Day tradition of bringing the soup to Prospect Park in Brooklyn to serve the homeless, and anyone else who wanted to eat. Now, in Miami, she is partnering with the local Movement Church to make the soup and pack it in to-go containers to feed more than 200 families in Homestead, a heavily Haitian and Hispanic suburb. Last year, she offered the soup in a park in North Miami, and people lined up an hour before she began serving.

Living in a country whose news media often portrays Haiti through the lens of its poverty (and whose president once used an expletive to describe Haiti and its neighbors), Ms. Michel said serving soup joumou “gives us the opportunity to share who we really are” and “what we represent to the world. We represent strength. We represent unity. It’s the reason we won the revolution.”

In Michigan, where the Haitian population is much smaller, the Haitian Network Group of Detroit hosts an annual Independence Day celebration that both Haitians and non-Haitians attend. Community members prepare and serve soup joumou, along with pate baked in flaky puff pastry, and sing the Haitian national anthem. This year, the soup and pate will be offered for curbside pickup.

“If I don’t have soup joumou within the first couple of weeks of January, I feel like I have set myself up to have bad luck that year,” said Shirley Alce-Konate, 52, treasurer of the group and a senior business analyst at Henry Ford Hospital.

Margareth Corkery, 56, the president of Haitian Network Group of Detroit and a board member at two local health organizations, said she keeps the soup tradition alive largely for her two children, 15 and 27, who are half-Haitian and grew up in America. “If they don’t hear it from us, they won’t hear it in school,” she said. “It is our duty to make sure they know, and also to educate Americans who don’t know.”

Cindy Similien, a New Yorker who has written numerous books on Haitian food and culture, said soup joumou feels especially meaningful right now, “as a symbol of freedom and unity to overcome the challenges posed by Covid-19” and the relics of enslavement that still exist, like mass incarceration. “You continue that legacy of freedom,” she said, “in sharing opportunities and resources with our community so that they can be uplifted.”

That freedom also feels personal, said Belinda Baptiste, 59, who plans to serve the soup at a drive-through outside her restaurant, Unforgettable Bakery & Cafe, in Savannah, Ga. Eating it reminds her “that we can do whatever, we can become whomever we want to become.”

“Is there something magical about it?” she wondered aloud. “I guess. There is a magic in soup joumou for Haitians.” 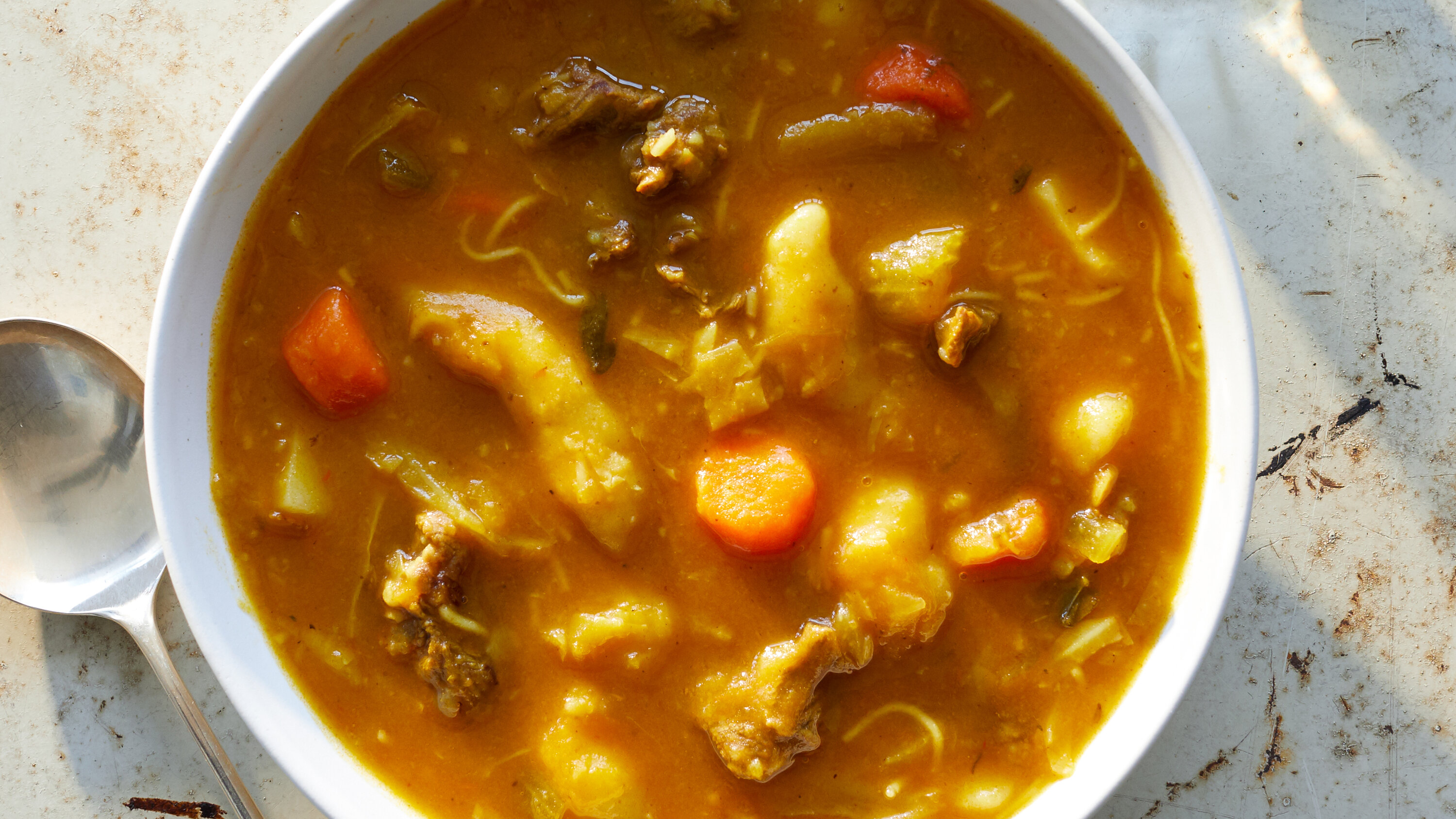 Facebook
Twitter
Pinterest
WhatsApp
Previous articleHit Hard by the Pandemic, Mexico’s Drug Cartels Tweaked Their Playbook
Next articleIn 2020, We Were There: The Year’s 13 Most Popular Dispatches