Home Sport A Top Equestrian Paralyzed in an Accident Sees Hope in a Coming...
Sport

The New York Times Sports department is revisiting the subjects of some compelling articles from the last year or so. Here is our April report on Kevin Babington’s efforts to continue working in the equestrian world after a show-jumping accident left him paralyzed from the chest down.

The anniversary of his spinal cord injury came and went in August, and Kevin Babington, the Irish Olympian show jumper who is one of the top coaches in equestrian sports, refused to feel sorry for himself.

He had work to do. Lots of work. His daily, intense exercise sessions leave him exhausted, but strengthening his body has a specific purpose.

In the summer of 2019, he was paralyzed from the chest down after being flung from his horse, Shorapur, at the Hampton Classic, a prestigious horse show in Bridgehampton, N.Y. He hit the ground headfirst, severely bruising his spinal cord. But Babington, 52, believes he will not only walk again but will climb atop a horse to ride as well. One of the main things he has learned over the last 16 months is to have patience.

Millimeter by millimeter, his body is healing, he said last month, and he can see that in the advances he has made.

Babington, a beloved Grand Prix rider who finished fourth at the 2004 Olympics for Ireland, can now lift his right arm and almost touch his mouth with it. He can move several fingers and toes, and just this week started moving his left thumb. He can sometimes feel sensation in his abdominal muscles. The sharp-as-a-blade body spasms are not as unbearably painful as they were in the spring. He rarely takes his pain medications these days, and his head is as clear as ever because of that.

From his wheelchair next to the riding ring, he continues to coach on a limited basis. He can project his voice well enough to talk to riders without either party relying on headsets, though he still prefers using them and, because of the pandemic, he also conducts lessons on video calls.

Late last month, he began trying to use a hand control to move and steer his motorized wheelchair. An upcoming renovation to Babington’s home on his horse farm in Loxahatchee, Fla., will give him the space to access the whole house. And the space to get out of it: An automatic front door will mean freedom for him to go alone to visit the barn, now filled with horses whose trainers have leased the stalls.

“We can maybe get them to focus on the exit first,” Babington said of the house contractors, before laughing. “So that way, I can run away and get a bit of my independence back.”

He has kept his sense of humor.

What gives Babington the greatest hope for recovery is his participation in a clinical trial involving stem cells at the Mayo Clinic in Rochester, Minn. He said he couldn’t wait to see how he would respond to the treatment, which will begin in about five months. Last year, a man paralyzed from the neck down in a surfing accident walked again after the treatment. Babington dreams that he too could be a miracle patient.

“It’s something to look forward to,” he said. “I’ve always tried to take things in stride, and I think I’ve handled the stress well. I definitely am feeling stronger all the time.”

His wife, Dianna Babington, marvels at his ability to push himself past normal limits. He has the resolve of an Olympian, she said.

An example: Among the specialized equipment that fills their living room is an apparatus known as a standing frame, which moves Kevin into an upright position and holds him there. He endures each grueling session in the standing frame without complaint, sometimes for more than an hour. His wife hopes to add a machine that simulates a person riding a horse, feet in the stirrups and all, when Kevin is ready for it. Soon, she said, hopefully soon.

The hundreds of thousands of dollars in donations from people in the show-jumping world have been put to good use, Dianna Babington said. Her husband would never have come this far in his recovery without the physical therapy those donations made possible. They both are grateful.

But the pandemic has put a stop to most of the public fund-raisers for Babington’s foundation, Dianna Babington said, and it has become a constant source of worry during an already trying time. Babington still cannot cough on his own, without pressure applied to his chest to help clear his airway, so contracting Covid-19 could be especially dangerous for him.

“We’re just going to keep trying to get him better,” said Dianna Babington, who continues to work as a trainer and to promote inflatable safety vests for riders. “Whatever that means, we’re going to keep fighting.”

Kevin Babington has also taken comfort and pride in watching his daughters’ show-jumping competitions on the internet.

Gwyneth, a high school senior with several college scholarship offers to compete in show-jumping, competed in her first Grand Prix event over the summer. She rode Mark Q, her father’s favorite horse.

“I wish I could’ve been there,” Kevin Babington said. “But I was there with her, in a way.”

With the Tokyo Olympics this summer, he watches and analyzes many Grand Prix shows online, for pleasure but also for business. He is one of the selectors for the Irish show-jumping team, and staying involved in the top level of the sport has helped keep his spirits high.

Babington is lucky in many ways, he said, and he takes time to reflect on that every day.

“I have so much to be thankful for,” he said. 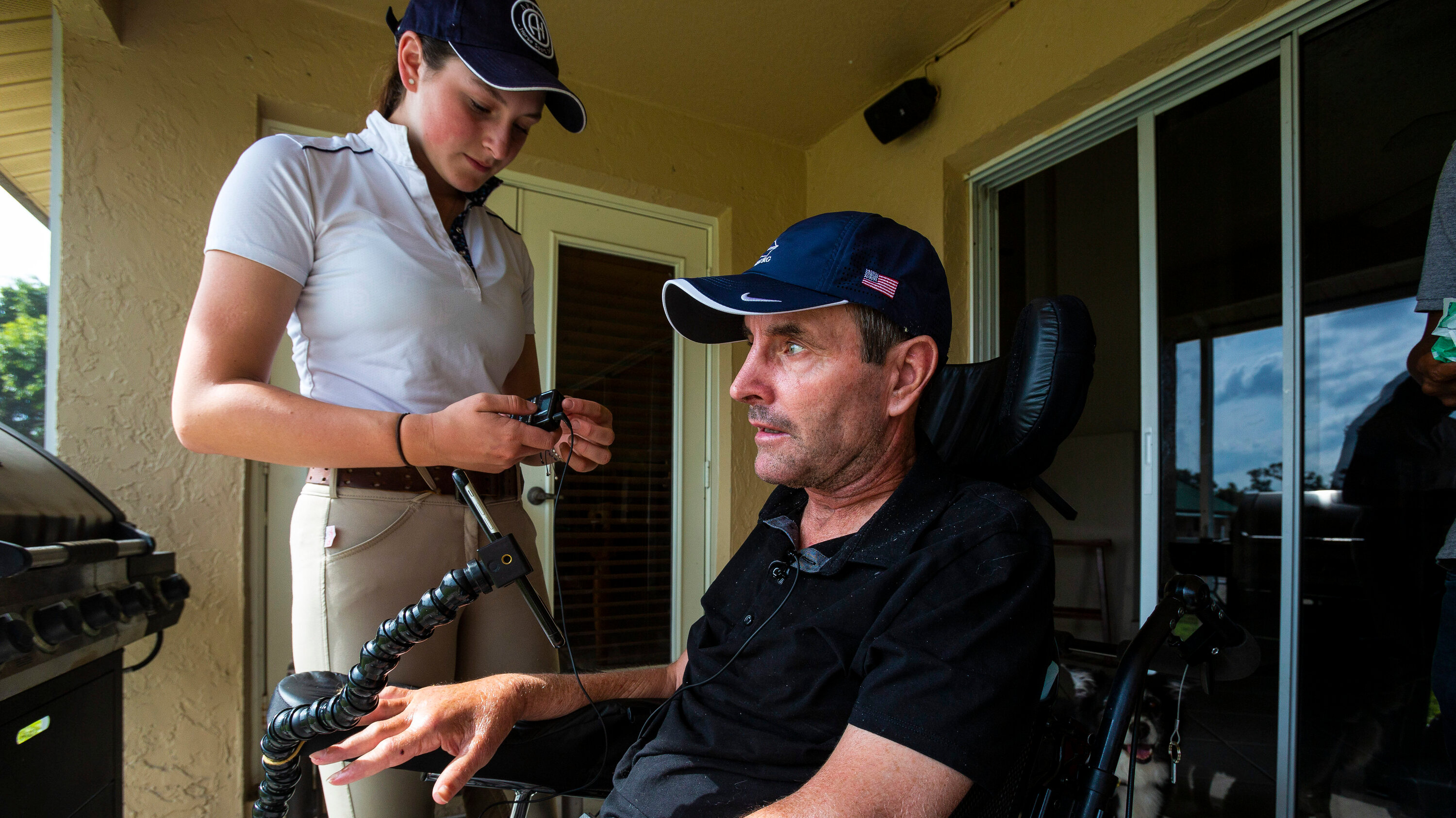