Four of the most fabled programs in college football — Alabama, Clemson, Ohio State and Notre Dame — still have hopes of winning the championship in one of the most chaotic, uncertain, week-to-week seasons in the sport’s history.

On Friday, the College Football Playoff will hold its semifinal games at the Sugar Bowl in New Orleans and the Rose Bowl in Arlington, Texas. (You read that right; the Rose Bowl was moved from California because of coronavirus cases and public health restrictions.) The winners will advance to the championship game, which will be on Jan. 11 at Hard Rock Stadium in Miami Gardens, Fla.

The mightiest dynasty in modern college football wants another crown. But the 14th team of Coach Nick Saban’s tenure makes offense look easy, and, in that way, it is strikingly different from some of its predecessors.

Players to watch: Three of Alabama’s offensive stars — quarterback Mac Jones, running back Najee Harris and wideout Devonta Smith — finished in the top five for this season’s Heisman Trophy. (The winner will be announced on Tuesday.) But don’t forget Patrick Surtain II, a junior cornerback who allowed 25 yards receiving or fewer in eight of 11 games this season.

Something Alabama loves: Alabama is averaging almost 50 points a game. When Saban won his first championship at Alabama in 2009, the same season Alabama’s starting tailback earned the Heisman Trophy, the Tide managed about 32.

Something Alabama detests: Alabama has lost seven fumbles in this shortened season, nearly double its toll from last season.

Alabama’s warning light: Alabama’s narrowest margin of victory this season was 6 points, in a win over Florida, and Notre Dame’s defense is better, allowing fewer than 19 points a game. Saban said this week that the Fighting Irish would pose “a challenge for our offense to finish,” so Alabama fans should be nervous if they see Will Reichard repeatedly head out for field-goal attempts. (He has been excellent so far — 12 for 12 — but hasn’t gotten that many chances. Notre Dame’s Jonathan Doerer has attempted 22 this season.)

Navigating the pandemic: Aside from disclosing Saban’s November bout with the virus and an earlier false positive for the coach, Alabama has said little about the reach of the pathogen inside its football program. But Alabama did not have any games rescheduled because of its own virus troubles.

Extra point: Saban is seeking his sixth national championship as the Crimson Tide coach, a mark that would equal Bear Bryant’s record at Alabama.

Notre Dame’s lone playoff outing, a 2018 semifinal game against Clemson, was a debacle: a 30-3 loss. A game against Alabama is one of its best opportunities for gridiron glory, even if the Fighting Irish are entering as underdogs.

Players to watch: Ian Book, the quarterback, “kind of makes them tick,” Alabama’s defensive coordinator said this week, but he also highlighted Kyren Williams, a sophomore tailback, who has run for 1,061 yards this season. Jeremiah Owusu-Koramoah, a 215-pound linebacker, and Kyle Hamilton, a sophomore safety, have 56 tackles each, tied for the team lead.

Something Notre Dame detests: History, or at least talking a lot about it. Aside from a regular-season victory over Clemson in November, Notre Dame has struggled in marquee games. There was the 2018 semifinal, but also a 16-point loss to Ohio State to end the 2015 season and the 28-point loss to Alabama in the Bowl Championship Series title game for the 2012 season.

Notre Dame’s warning light: Book was sacked a season-high six times in Notre Dame’s loss to Clemson in the Atlantic Coast Conference championship game. Nearly two-thirds of Alabama’s 32 sacks have come in the last four games. Early penetration from Alabama could signal a dismal day ahead for the Fighting Irish, but look for Notre Dame to try to improve on a running game that gained only 44 yards in the A.C.C. title matchup.

Navigating the pandemic: A September game against Wake Forest was postponed because Notre Dame was facing a surge of cases around its football team. The game was later canceled, the A.C.C. said, “to preserve the integrity” of the league championship game.

Extra point: Ordinarily an independent in football, Notre Dame played in the A.C.C. for the 2020 season and will become the first team to appear in the playoff after losing a league championship game.

Vanquished during last season’s title game in the Superdome, the very building in which they will play on Friday night, Clemson and Coach Dabo Swinney are back in the playoff for the sixth consecutive season and will face a foe they’ve beaten in two previous playoff games. Last season, Clemson outlasted the Buckeyes, 29-23.

Players to watch: As ever with Clemson these days, quarterback Trevor Lawrence is the signature star: a Heisman Trophy finalist, the projected first pick in the N.F.L. draft and a figure like few others in Clemson history. But Lawrence is quick to spread the credit, his offense boosted by running back Travis Etienne, who set a Football Bowl Subdivision record for most games with a touchdown (42) while playing against Boston College in October. He’s the only tailback in the college game with more than 500 receiving yards.

Something Clemson loves: Both sides of the ball. Under Swinney, who played wide receiver at Alabama, Clemson this season is scoring almost 45 points a game, third-best in the sport. And the defense likes to swarm, averaging four sacks per game — a potential recipe for misery for Justin Fields, the Ohio State signal caller who went down three times in the Big Ten championship game against Northwestern.

Something Clemson detests: Third-down conversions. The Tigers’ percentage is the worst of the playoff field after Clemson succeeded on 78 of 167 attempts.

Clemson’s warning light: Ohio State’s pass defense was the worst in the Big Ten. If Lawrence, who did not play in November’s double-overtime loss to Notre Dame because he had tested positive for the virus, cannot succeed against its defense, Clemson is almost certain to be in serious jeopardy.

Navigating the pandemic: Clemson announced on Wednesday that its offensive coordinator, Tony Elliott, would not participate in the semifinal because of protocols related to the virus, and the university has said that at least 222 people associated with its athletic department, including Lawrence, have tested positive for the virus since June. The school has not released a sport-by-sport breakdown, but Swinney was furious when a game against Florida State was canceled because of trouble in the Seminoles’ program.

Extra point: Let the smack talk fly. Swinney ranked Ohio State No. 11 going into this game and hasn’t deviated, declaring this week that he did not put any team in his top 10 if it didn’t play at least nine games. “I could probably run for governor in Michigan and have a good chance,” he said. But he also conceded that Ohio State had as good a shot as any of the four teams at the title.

In its fourth playoff appearance, Ohio State, which last won the college football title in the 2014 season, hopes to make up for time and swagger lost to the pandemic.

Players to watch: Quarterback Justin Fields will be looking to cement his spot as a top draft pick after having so few chances to show his strengths this season. His completion percentage tops Lawrence’s, but he has thrown just 15 touchdown passes and rushed for another five. Wyatt Davis, a 315-pound interior lineman, will be crucial to creating a running game, and even with a shortened season, cornerback Shaun Wade logged nearly half of his career interceptions. Chris Olave, a wide receiver who missed the Big Ten title game, is expected to be back.

Something Ohio State loves: Time of possession, which should come in handy while trying to contain Clemson’s ability to score. Ohio State usually controls the ball for over 33 minutes per game.

Something Ohio State detests: The pass defense is a glaring issue, but that’s just one element of a defense that has eroded from last season, when it was the best in the Big Ten. In 2019, when the defense was loaded with players like Chase Young and Jeff Okudah, the second and third picks in the 2020 N.F.L. draft, Ohio State surrendered just 248 total yards a game. This year? 358.

Ohio State’s warning light: The Buckeyes wheezed in the Big Ten championship game, which they reached only because the league changed a crucial eligibility rule. They took control when they found a rushing attack that had 305 second-half yards. They are unlikely to have so much of a time luxury this time. Coach Ryan Day said he would be looking for a balance between passing and running, but, he said, “Whenever you start not calling it aggressively, that’s when bad things happen.”

Navigating the pandemic: The Buckeyes canceled a game at Illinois because of cases within their program, and matchups against Maryland and Michigan were also canceled because of the pandemic.

Extra point: In his second season atop Ohio State, Day is undefeated — except for last season’s playoff loss to Clemson. Woody Hayes was 10-6-2 in his first two seasons in Columbus, while Urban Meyer was 24-2. Jim Tressel won a national championship to end his second season, when Ohio State went 14-0. 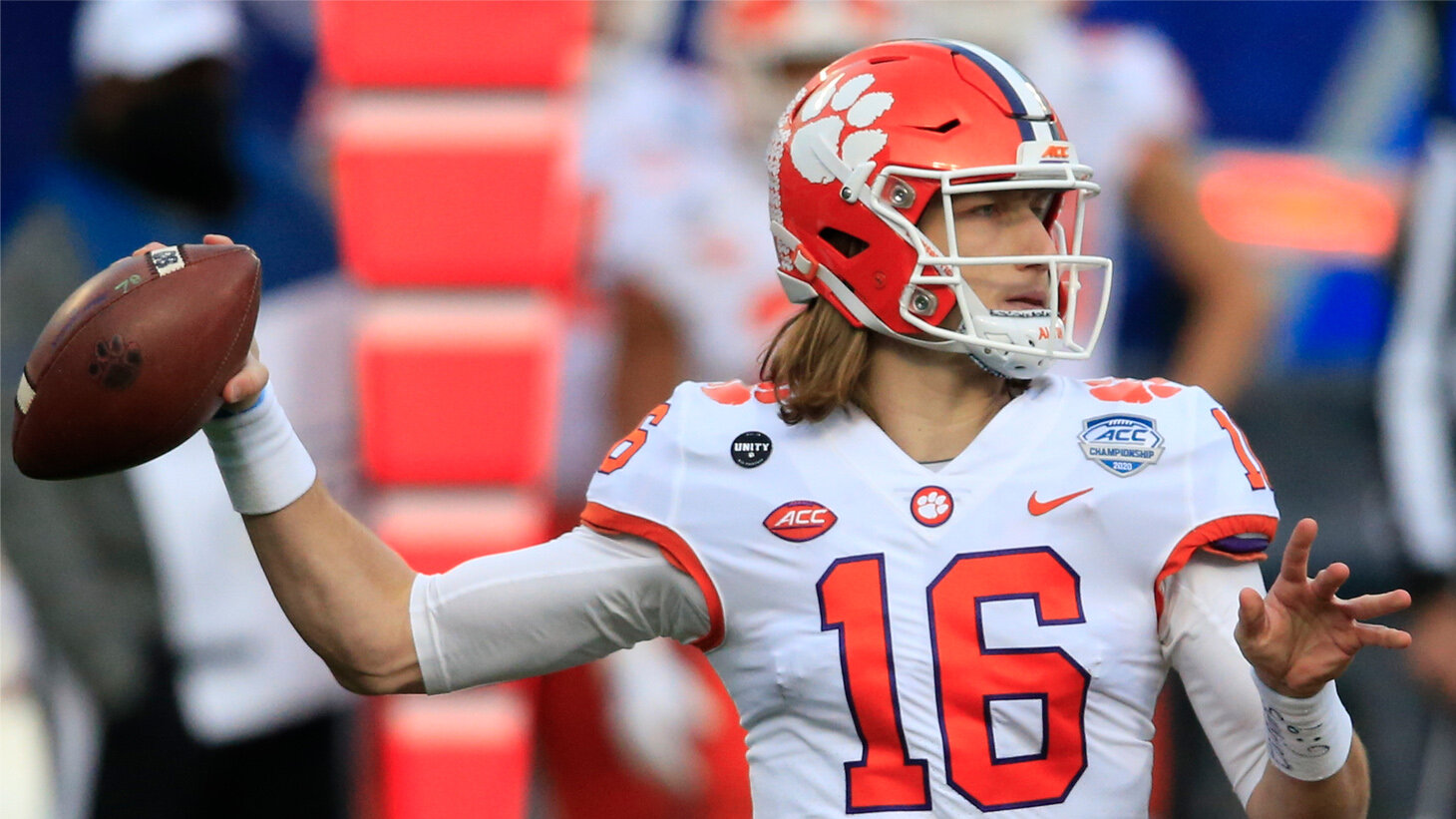