How Support for Legal Abortion Went Mainstream in Argentina

BUENOS AIRES — It was just two years ago that the organizers of a stirring women’s movement in Argentina were handed what felt like a bitter loss, their efforts to legalize abortion rejected in the Senate after intense lobbying by the Catholic Church.

This week, after their efforts culminated in a landmark vote to make Argentina the largest Latin American country to legalize abortion, it became clear that the loss was a vital step in further changing the conversation around feminism in their country.

“We managed to break the prejudice, and the discussion became a lot less dramatic,” said Lucila Crexell, who was among the senators who voted to legalize abortion on Wednesday. She was one of two lawmakers to abstain in the 2018 vote. “Society at large started to understand the debate in more moderate, less fanatic terms.”

The shift was visible on the street: What started as a series of marches by young women had, over the past few years, started looking like a truly national movement. Older women joined the demonstrations, and men, too. Blue-collar workers joined with professionals in marching, and rural campaigners linked hands with the movement’s urban base.

They came to support a movement that formally began in 2015 in outrage over the killing of women — its name is Ni Una Menos, or not one woman less — and began focusing its message on the toll that underground abortions were taking.

But the seeds of its success were planted more than a generation ago, in the campaigns by mothers and grandmothers of the disappeared that helped usher out years of military juntas in Argentina in the 1980s. When abortion rights activists of the past few years waved their signature green handkerchiefs, they were following in the footsteps of those Argentine women, who protested the generals’ abuses by wearing white handkerchiefs.

“Argentina has a well-established tradition when it comes to popular organizing and mobilizations,” said Elizabeth Gomez Alcorta, Argentina’s minister of women, gender and diversity. “The street, as we call it, has a powerful effect in the conquest of rights.”

In 2010, Congress approved same-sex marriage, making Argentina the first country in Latin America to confer a right that many in the region now have. Two years later, Argentina approved one of the world’s most progressive gender identity laws. Both of those issues gained traction through street activism.

Women have also gained a critical mass in Congress, able to shape the debate over abortion rights, since a quota law first reserved a third of legislative seats for them in the 1990s, and was later expanded to require parity.

In this latest vote, and victory, legislators framed abortion rights as a matter of social justice and of public health — dozens of women die a year seeking abortions, according to Argentina’s Access to Safe Abortion Network.

Lawmakers who changed their votes this time around to support legalization acknowledged that such framing had a big effect.

“We’re going through a shift in paradigm, and this change is led by the feminist and environmental fights,” said Silvina Garcia Larraburu, a senator from the southern Rio Negro province who voted against legalization in 2018 but for it this time. “Beyond my personal position, of my beliefs, we are faced with a problem that requires a public health approach.”

That framing also made the effort politically palatable for President Alberto Fernandez, a leftist law professor elected in 2019, to make legalizing abortion a campaign promise and an early legislative priority.

“In Argentina, safe abortion exists for those who can pay for it,” said Vilma Ibarra, the president’s legal and technical secretary, who drafted the bill. “Those who can’t must go through very difficult conditions.”

Argentine feminists took up the cause of abortion rights as far back as the 1980s, but the issue found little political traction at a time when democracy itself seemed fragile in the aftermath of the military dictatorship, and when religious conservatism had a heavy hold on public debate.

The formal campaign began in 2005, with the foundation of the National Campaign for the Right to Legal, Safe and Free Abortion, a leaderless umbrella organization that had legalization as its singular goal.

They presented a first bill in 2008 — only to have it shunned by the vast majority of lawmakers, who were afraid that being associated with the subject could hurt them politically without delivering results, since it was seen as having no chance of passage against the Catholic Church’s lobbying.

“Many said they agreed, but refused to put their signature on the bill,” said Julia Martino, an activist who helped lead that effort.

Feminist groups continued to present abortion bills every two years, hoping to keep the issue alive. But it was a string of particular brutal murders of women, including that of a 14-year-old pregnant teenager in 2015, that turbocharged their long-shot quest and spurred the creation of Ni Una Menos.

Their effort galvanized many women in Argentina, setting off massive street demonstrations and leading to a broad reckoning on sexism, gender parity and women’s rights that began to reach other Latin American nations.

When abortion-rights campaigners in Buenos Aires held a demonstration to support legalization in late 2017, they were stunned by the turnout.

“What happened with the movement is that it started increasing in number and gaining different voices,” said Claudia Pineiro, a writer and abortion-rights activist.

Dora Barrancos, 80, a government sociologist who was among the women who championed the issue during the 1980s, said this new generation built “an insurrection that is infectious.”

The Ni Una Menos movement had already pushed women’s rights into the national political conversation in 2017, when Argentina passed a law expanding the quota system in Congress, making way for women to attain full parity in national politics.

That milestone was the work of a coalition of female lawmakers that found, as they strategized on WhatsApp groups and other settings, that they worked well together even across political differences.

The kinship they built fighting for greater female presence in the legislature allowed women to break ranks with male political elders and forge a new form of politics that was cooperative, pragmatic and largely devoid of grandstanding.

“We realized how powerful we are as women when we act in a coordinated fashion,” said Silvia Lospennato, a member of Congress allied with former President Mauricio Macri, a center right leader who opposed abortion.

“We all contributed, in a way of doing politics that is very anomalous and is completely different from the way men do politics,” Ms. Lospennato said.

Having prevailed on parity, many female lawmakers saw a path to legalizing abortion in 2018. The effort swelled into a national movement, but fell short in the Senate after heavy campaigning by the Catholic Church — and in particular by Pope Francis, himself Argentine.

The following year, Mr. Fernandez, who has long supported the right to legal abortion, campaigned for president as a feminist. His campaign poster included a gender neutral version of the word “todos,” which means everyone, in which the letter “o” was replaced by the symbol of the sun.

Once in office, Mr. Fernandez established a ministry devoted to advancing women’s rights. And he promised that he would put the weight of the executive branch behind the effort to legalize abortion.

“He saw there was a grass-roots movement he wanted to seize on,” said Maria Victoria Murillo, a political-science professor at Columbia University, who is from Argentina. “Argentine politicians are very attuned to street movements.”

Mr. Fernandez celebrated the victory in the Senate, where the measure passed by a broader margin than many, in the chamber and beyond, had anticipated.

“Safe, legal and free abortion is the law,” he said on Twitter. “Today we are a better society.” 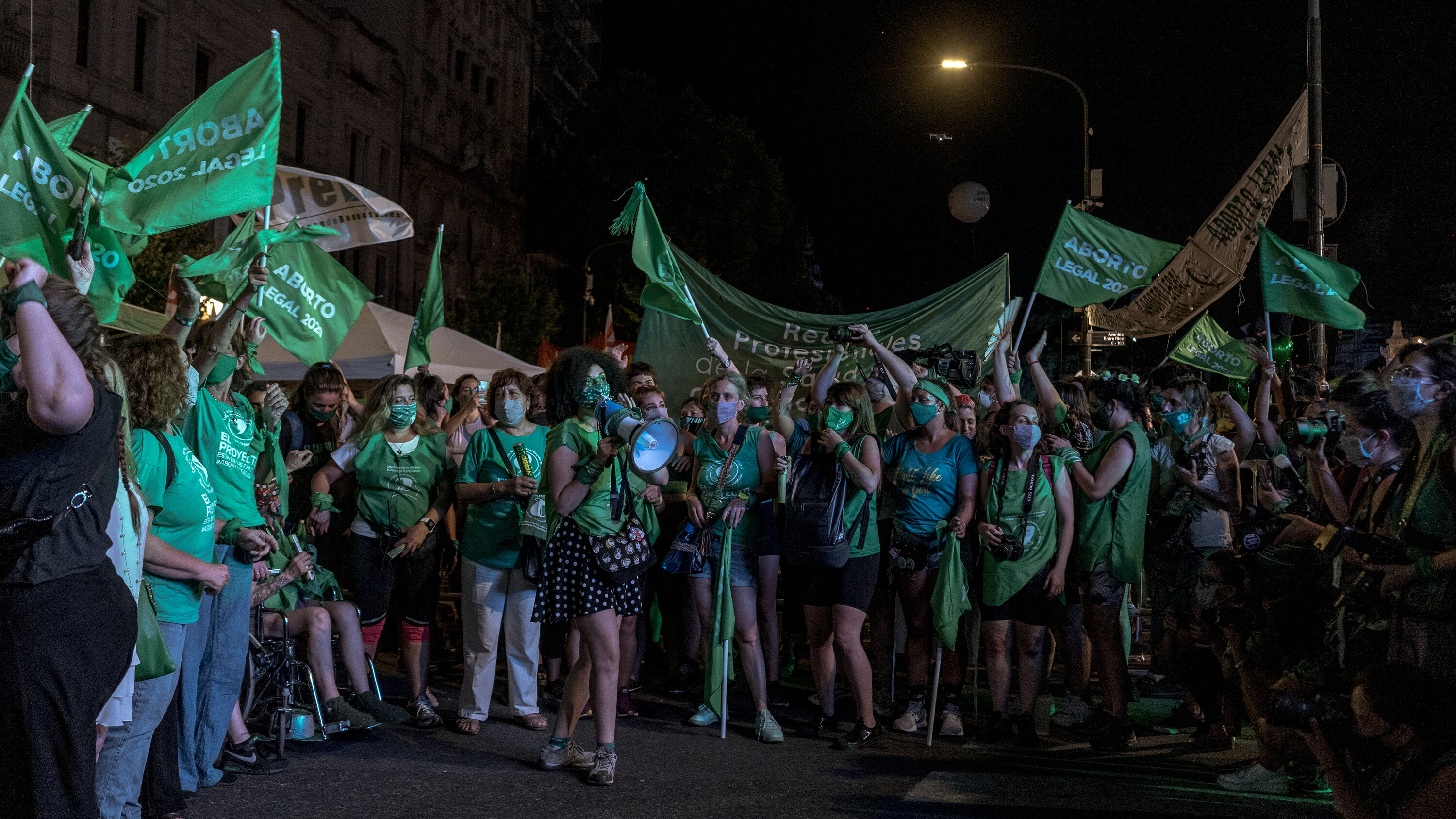