In Pasadena, Moving the Rose Bowl Makes For Unusual Rancor

Many people know of genteel Pasadena, Calif., if only from New Year’s Day television, waking up to the palm-tree-lined Rose Parade down Colorado Boulevard, or stirring from a football-watching stupor long enough to admire the Technicolor sunset splashed on the San Gabriel Mountains behind the Rose Bowl stadium.

In recent days, though, the community’s patrician hearts have been roused and the white gloves have come off.

The Rose Bowl Game, a jewel so treasured it has been trademarked, has been hijacked, usurped and taken away with the type of roguish disregard for tradition that might otherwise be witnessed in Pasadena only when a protected flax-leaved paperbark tree is chopped down.

The coronavirus pandemic led to the Rose Parade’s cancellation in July, but the Rose Bowl Game was going to be played without fans until College Football Playoff leaders moved Friday’s semifinal between No. 1 Alabama and No. 4 Notre Dame because local health directives would prohibit the families of players from attending.

The game was transplanted to Arlington, Texas, and it will still be called the Rose Bowl Game — even if the usual backdrop of the bucolic Arroyo Seco is traded in for a parking lot.

That indignity came after a rancorous negotiation in which the city, which shares a trademark on the name of the game with the Tournament of Roses Association, pondered going to court before reaching a $2 million settlement on Wednesday with the nonprofit association, which sells the rights to the game to ESPN and the College Football Playoff.

“The football game belongs to the City of Pasadena and the people of Pasadena,” said the city’s newly elected mayor, Victor Gordo, a lawyer and longtime City Council member who directed negotiations with the Tournament of Roses.

What troubles Gordo, and others in Pasadena, is the precedent of allowing the Rose Bowl to be played elsewhere. It happened once before, in 1942, when the game was moved to Durham, N.C., weeks after Pearl Harbor was bombed. But college football then was a quaint amateur enterprise, not the multibillion-dollar behemoth it is today.

And though the city has a contract with the Tournament of Roses through 2048, and with its other tenant, U.C.L.A., through 2044, a fear percolates that the 99-year-old stadium — even with a recent $182 million renovation and its status as a National Historic Landmark — could become obsolete the way others like the Orange Bowl and Cotton Bowl became when they lost their namesake bowls.

That disquiet became more real in September with the nearby opening of the $5 billion SoFi Stadium.

“They’re competing with a new stadium here in Los Angeles,” said Bill Thomson, a former mayor and member of the Rose Bowl Operating Company board, whose law firm drafted the city’s trademark protections. “If they don’t enforce the mark now, somebody else can come along and use it, too, and it will be the beginning of the end for the exclusive rights for the mark.”

Such sentiment often finds a more receptive audience in Pasadena than in many other California communities. Preservation maintains a strong ethos with century-old Craftsman homes diligently conserved and more than 100 tree species protected.

“Pasadena is a city with a very high self-awareness,” said Wayne Hunt, a graphic designer who teaches at the city’s ArtCenter College of Design. “Every time we move a tree, you need to have a meeting.”

And the football stadium, set in a ravine, is much more than that as an exercise and recreation hub. “Even people who don’t like football love the Rose Bowl as a place,” Hunt said.

The Rose Bowl Game is one of the few sporting events — the Kentucky Derby and the Indianapolis 500 are among others — whose identity is tied to a place, Hunt said. That connection has value the way a brand like Red Cross or Apple goes beyond even a well-recognized logo. But it is fragile.

“That’s why you wouldn’t move the Rose Parade to Oklahoma City,” he said.

The value of the mark, which helps the Rose Bowl Game draw more viewers than any other non-playoff game, is not just considerable to Pasadena. It explains why the College Football Playoff and ESPN, which pays upward of $80 million for the broadcast rights, pushed for the Rose Bowl name to stay attached to the game this year.

“We recognize that long-term relationships are important, and the long-term view has to be more important than the short-term view,” said David Eads, the executive director of the Tournament of Roses. “Our relationship with the College Football Playoff and ESPN is important.”

Eads said the College Football Playoff invoked a force majeure clause in its contract with the Tournament of Roses to move the Rose Bowl on Dec. 19, shortly after Notre Dame Coach Brian Kelly threatened to boycott the game because parents would not be allowed. The Tournament of Roses appealed to the state to allow live spectators — it proposed letting 400 family members into the 90,888-seat stadium — but it was denied.

In the news release announcing the change, the Tournament of Roses said it was not yet determined whether the Rose Bowl name would be kept for the game. Eads, who led negotiations with the city, said in an interview Wednesday that the association was well within its rights to invoke a clause in its contract with Pasadena to let the name be used under the unusual circumstances.

“I don’t think there’s any question in our mind that this was force majeure,” Eads said, adding that nearby Huntington Memorial Hospital informed the Tournament of Roses several weeks ago that it was so stretched by Covid-19 cases that it would not be able to take in a player who was seriously injured in the game.

But Gordo said that invoking force majeure was contrived, and that the state restrictions on fans not being able to attend had been in place since March. He noted that the Tournament of Roses’ statement on Dec. 19 was released as Stanford and U.C.L.A. were playing a game at the Rose Bowl with no fans in attendance.

“Force majeure is an act of God,” Gordo said. “The only thing that changed was the Notre Dame coach and other coaches wanted fans. That is not force majeure.”

The negotiations, which began in video conferences, devolved from collegial discussions to lawyers emailing proposals back and forth, said Gordo, who was also peeved that as the negotiations were taking place, the Rose Bowl Game logo was on ESPN promotions for the game, in the background during interviews and on news releases. The $2 million payment to the city will help offset an $11.5 million bond payment that the city has been forced to help cover because Rose Bowl stadium revenues were walloped by the pandemic.

Gordo declined to say whether the City Council’s discussion of legal action, which was listed on a closed session agenda for the negotiations, was tied to a clause that says “monetary damages alone would be inadequate,” all but inviting the victim of a breach to seek a court injunction.

“Careful consideration was given to all the city’s options,” Gordo said. “That’s all I’ll say.”

Such contentiousness is exceedingly rare in Pasadena.

Richard Chinen, a former president of the Tournament of Roses, said the city’s insular nature generally fostered a collegial, cooperative environment on civic matters. And in the case of the Rose Bowl, it helps that many know the stadium’s origin — it was built by volunteers and later turned over to the city.

Still, he understood the strain. “It’s a harmonious relationship, but Covid has struck us all sideways,” Chinen said.

There does seem to be one point of consensus, which should be reinforced during Friday’s telecast, when a verdant bowl set at the foot of sun-kissed mountains will be missing from the picture: that a Rose Bowl in any other place is not so sweet. 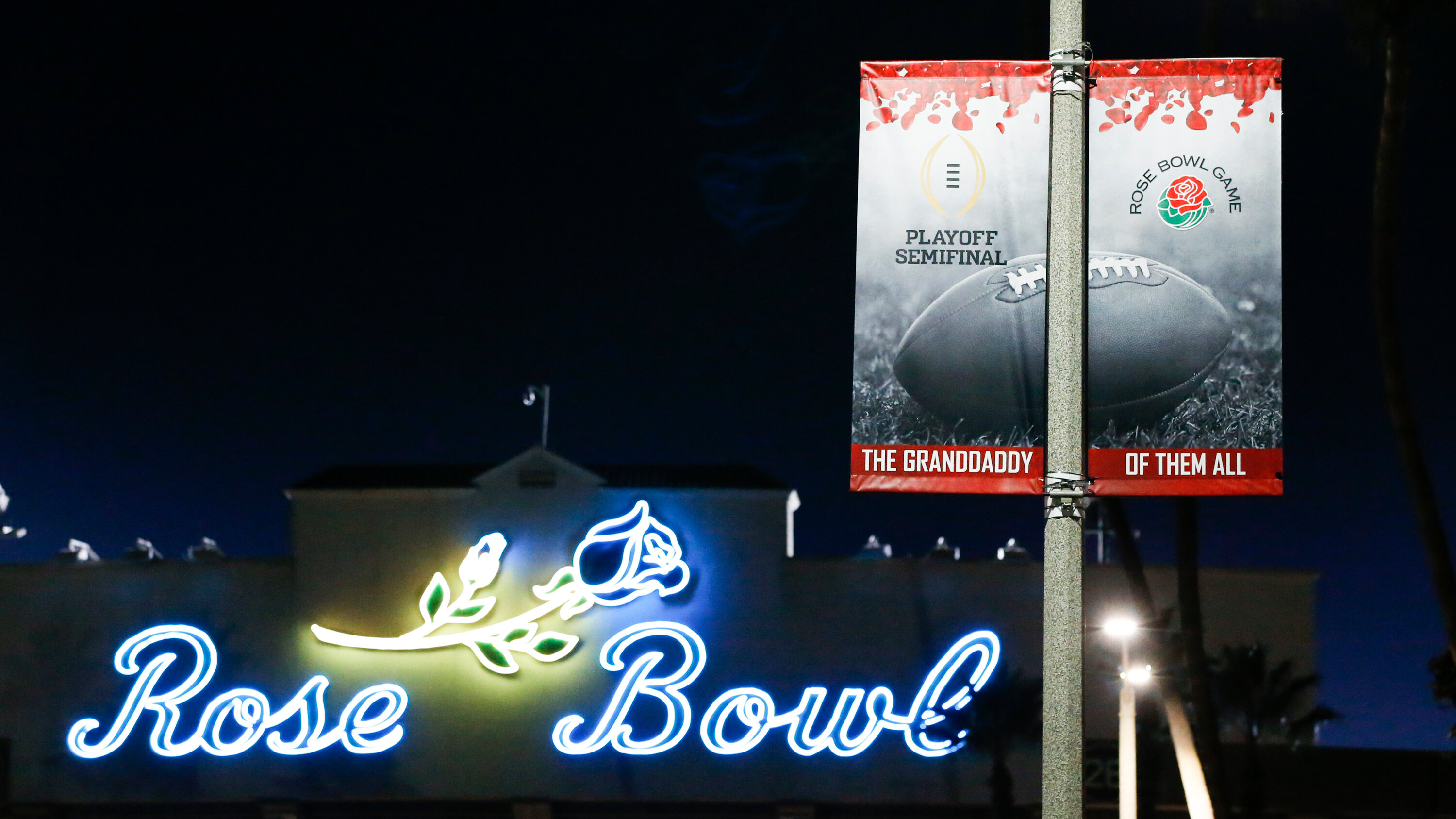