The Problem With Problem Sharks

The war on sharks has been waged with shock and awe at times. When a shark bit or killed a swimmer, people within the past century might take out hundreds of the marine predators to quell the panic, like executing everyone in a police lineup in order to ensure justice was dispensed on the guilty party.

Eric Clua, a professor of marine biology at the Ecole Pratique des Hautes Etudes in Paris, said the rationale behind shark culls in the past was simple: fewer sharks, fewer attacks. That reasoning also drives methods such as shark nets and baited hooks, which are currently in use at a number of Australian and South African beaches that are frequently visited by sharks. Nature, he notes, pays too great a price.

“They are killing sharks that are guilty of nothing,” said Dr. Clua, who studies the ocean predators up close in the South Pacific.

Dr. Clua said he has found a way to make precision strikes on sharks that have attacked people through a form of DNA profiling he calls “biteprinting.” He believes it’s usually just solo “problem sharks” that attack humans repeatedly, analogizing them to terrestrial predators that have been documented behaving the same way. Instead of culling every bear, tiger or lion when only one has serially attacked people, wildlife managers on land usually focus their ire on the culprit. Dr. Clua said that problem sharks could be dispatched the same way.

This summer, Dr. Clua and several colleagues published their latest paper on collecting DNA from the biteprints of large numbers of sharks. Once a database is built, DNA could be collected from the wounds of people who were bitten by sharks, and matched to a known shark. The offending fish would then need to be found and killed.

Critics have taken issue with every facet of this plan.

“That’s not how fishing works,” said Catherine Macdonald of the University of Miami’s Shark Research & Conservation Program. “Even when you have a satellite-tagged shark and you know where it is, if you turned up at the site and put a hook in the water, there’s no reason to think you would definitely catch that shark.”

The theory of the “problem shark” has its origins in a series of attacks in New Jersey in 1916 that killed four people, shocking Americans at the time. Fishermen captured and killed many sharks in the aftermath, and newspaper accounts said that one, a great white, may have had human remains in its stomach.

Still, some experts have theorized that another species, the aggressive bull shark, may have been involved as well, since one of the attacks occurred in a small, brackish creek over a mile from the ocean. Bull sharks are known to enter brackish water. Great whites are not.

What’s more, Christopher Pepin-Neff, a public policy lecturer at the University of Sydney who has studied human perceptions of sharks, said the “rogue shark” theory, popularized by Steven Spielberg’s “Jaws,” has been debunked.

“They are basically saying that the shark from ‘Jaws’ is real,” Dr. Pepin-Neff wrote of Clua and his co-authors.

Other researchers prefaced critiques by saying they respect Dr. Clua, whose academic research on shark ecology and behavior has been cited many times by other shark specialists. But even those who say that his approach would produce useful information on shark behavior, such as Blake Chapman, who studied shark neuroscience at the University of Queensland in Australia and wrote a book on human-shark conflict, said removing these guilty sharks “would be near impossible.”

“I don’t think that the removal of ‘problem individuals’ as a result of this information is a realistic application for the data,” she said, adding that the existence of problem sharks, at best, has never been proven.

David Shiffman, a marine conservation biologist and postdoctoral researcher at Arizona State University, said that Dr. Clua’s proposal would cost billions of dollars to implement on a meaningful scale in Australia, South Africa or the United States, countries with vast coastlines where sharks and people often mix.

“This idea makes no sense on any level that I’ve been able to find,” said Dr. Shiffman, who has debated the proposal with Dr. Clua on Twitter.

Dr. Clua says research he’ll publish soon proves that “problem sharks” exist among species such as bull and tiger sharks. He also describes his work as “disruptive,” and admits that it is on the edge of accepted science in marine biology.

“Most of the shark researchers are thinking, not the wrong way, but in an incomplete way,” he said.

One of Dr. Clua’s co-authors, John Linnell of the Norwegian Institute for Nature Research, studies human conflicts with predators on land, and acknowledges that he’s not a “shark person.” Land predators sometimes stalk and attack humans until they are killed, he said.

Recent history is full of such examples, some almost mythic. Two male lions nicknamed “the ghost” and “the darkness” were blamed for killing dozens of people in southwestern Kenya in 1898. Those lions were tracked and shot by hunters. A decade later, a Bengal tigress known as the “Champawat Tiger” supposedly killed 436 people in Nepal and India. A hunter killed her as well.

Craig Packer, founder of the Lion Center at the University of Minnesota, said those stories are true, though certainly embellished by colonial authors for readers back in Britain. Dr. Packer has studied man-eating lions in Tanzania and likened the phenomenon to an “outbreak” that can spread through a pride or be taught by mother to cubs.

“Every now and then, one of them figures out we’re a free lunch,” he said.

Biteprinting won’t be as simple as sending hunters into the field to take out a tiger with a taste for human flesh, Dr. Linnell acknowledges. But he said that “anything is better than the current unselective mass killing response.” If humans reacted to bears the way they have with sharks, Dr. Linnell said it would be akin to “going out into the forest and randomly shooting the first 1,000 animals that you see.”

However people react when shark attacks do occur, Dr. Shiffman offered the reminder that such incidents are rare. According to the International Shark Attack File at the University of Florida, there were 64 unprovoked attacks on humans last year and 41 provoked attacks, meaning that a person “initiates interaction with a shark in some way.”

Five of the attacks were fatal. More people are killed by falling trees in the U.S. every year.

While shark attacks are uncommon, so are shark culls, although a prominent surfer recently called for one on Reunion Island in the Indian Ocean, which is home to bull sharks. Instead, a number of countries deploy shark nets, similar to fences, beyond the surf at popular beaches. Dangerous sharks get tangled in the nets, but so do harmless ones, along with dolphins, sea turtles and other marine life.

In place of these methods, many beach authorities have embraced more humane methods of prevention over extermination. Drones, blimps and tags connect to apps that warn lifeguards and bathers to steer clear of beaches when sharks are around. And after two fatal attacks occurred in New England in recent years, Cape Cod residents received tourniquet training.

Dr. Clua hopes to pitch his DNA database to Reunion Island, where 10 people have been killed by sharks in the last decade. He thinks he could set up his biteprinting operation for less than $1 million and prove it works.

For now, he’ll practice the technique on tiger sharks, known to eat just about anything, when he gets back to his base of research in French Polynesia.

“I’ll let them bite a pig leg,” he said, “or something else with flesh, muscle and bone.” 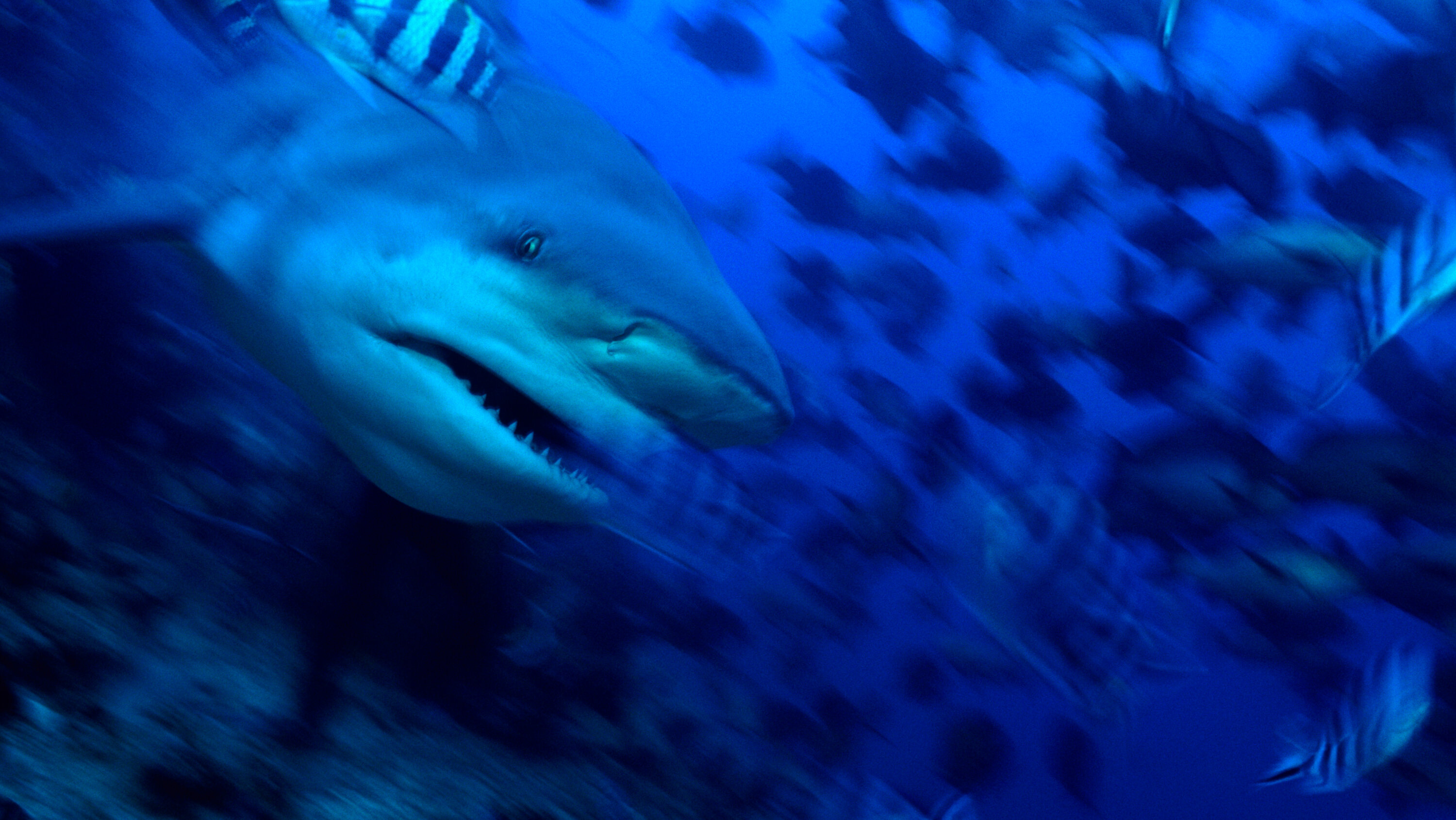