As Alabama running back Najee Harris took a handoff, bounced outside and headed upfield, he was confronted by Notre Dame cornerback Nick McCloud, who charged up to meet him with his shoulder lowered.

No matter. Harris, a 6-foot-2, 229-pound senior, treated McCloud like an oversize fire hydrant, leaping over him with the clean, syncopated stride of an Olympic hurdler and galloping down the sideline.

The play was the signature moment in Alabama’s 31-14 victory over Notre Dame in a College Football Playoff semifinal Friday night in Arlington, Texas — Harris’s elegant athleticism epitomizing how effortlessly the Crimson Tide dispatched the Fighting Irish.

The win reinforced the legitimacy of Alabama’s return to the top of the college football ladder after it missed the four-team playoff for the first time last season. The top-ranked Crimson Tide ripped through a Southeastern Conference-only schedule, outscored a dogged Florida team in the conference title game and now has advanced to the Jan. 11 championship against the winner of Friday’s other semifinal, between Clemson and Ohio State.

Alabama’s dynamic offense, which revolves around quarterback Mac Jones, receiver DeVonta Smith and Harris — all of whom finished in the top five in Heisman Trophy balloting — zipped down the field for touchdowns on its first three drives, and Notre Dame never truly threatened the Crimson Tide.

Though Harris, who finished with a total of 125 yards rushing, had the highlight-reel play, Smith showed why he is the presumed favorite to win the Heisman. On his first touch, he took a quick pass at the line of scrimmage and used a textbook block by John Metchie III to scoot 26 yards for a touchdown. He ended up with three touchdowns among his seven catches for 130 yards.

All the while, Jones was typically close to flawless, completing 25 of 30 passes for 297 yards.

About the only person on Alabama’s sideline who looked uncomfortable was Alabama Coach Nick Saban, who drew a late unsportsmanlike penalty after ranting at officials.

“We didn’t finish the game the way we liked,” Saban said in a television interview, adding with a knowing smile, “I’ve always got something to complain about.”

Still, after a year away from the playoffs, he was pleased enough.

“These guys have really earned the opportunity to play in the national championship game, so we’ll see what we can do with it,” he said.

If Alabama (12-0) disposed of Notre Dame (10-2) with familiar efficiency, it was not hard to be reminded of the circumstance under which this game — and entire season — took place, in the middle of a pandemic that has upended sports.

The logo at the center of the Dallas Cowboys stadium was a familiar one on New Year’s Day — the red stylized Rose Bowl Game logo, which normally adorns its namesake stadium in Pasadena, Calif.

But this year, after Notre Dame Coach Brian Kelly threatened to boycott the Rose Bowl because health rules in California would not allow families to attend the game, the Rose Bowl was moved to Texas — the first time it had not been played in Pasadena since 1942, when it was moved to Durham, N.C., shortly after Japan bombed Pearl Harbor.

It was a familiar ending under the bright lights for Notre Dame.

The Fighting Irish have now lost seven consecutive major bowl or playoff games since 2000, none of which has been closer than 14 points.

The latest convincing defeat gives greater weight to cries that the Irish should not have been in the playoff. Notre Dame had the best win of the regular season, defeating Clemson in double overtime in early November. But that game came without Clemson quarterback Trevor Lawrence, who was recovering from a bout with the coronavirus. When the teams met again in the Atlantic Coast Conference title game, Clemson won handily, 34-10.

Instead, Texas A&M, whose only loss was a decisive defeat against Alabama, was left out.

Notre Dame had fortified its offensive and defensive lines since it was routed by Alabama in the 2012 national championship game, but the deficit between the teams’ skill players was on full display — particularly the mismatch between the Alabama receivers and the Irish secondary.

Notre Dame, which entered as nearly a three-touchdown underdog (and somehow covered the spread), pinned its hopes on being able to keep the Alabama offense on the sideline. The Irish, relying on quarterback Ian Book’s short passing and the running and receiving of halfback Kyren Williams, managed to grind out a 15-play drive that culminated with a 1-yard scoring run on fourth down that cut Alabama’s lead to 14-7 in the second quarter.

And after their defense got its first stop, the Irish had an opportunity to narrow a 21-7 deficit, but Jonathan Doerer missed a 51-yard field goal just before halftime. The Irish never threatened again. They scored their final points when Book had a touchdown run in the final minute. They recovered an onside kick after that, but by then Alabama had leapt over the Fighting Irish and run off with a victory. 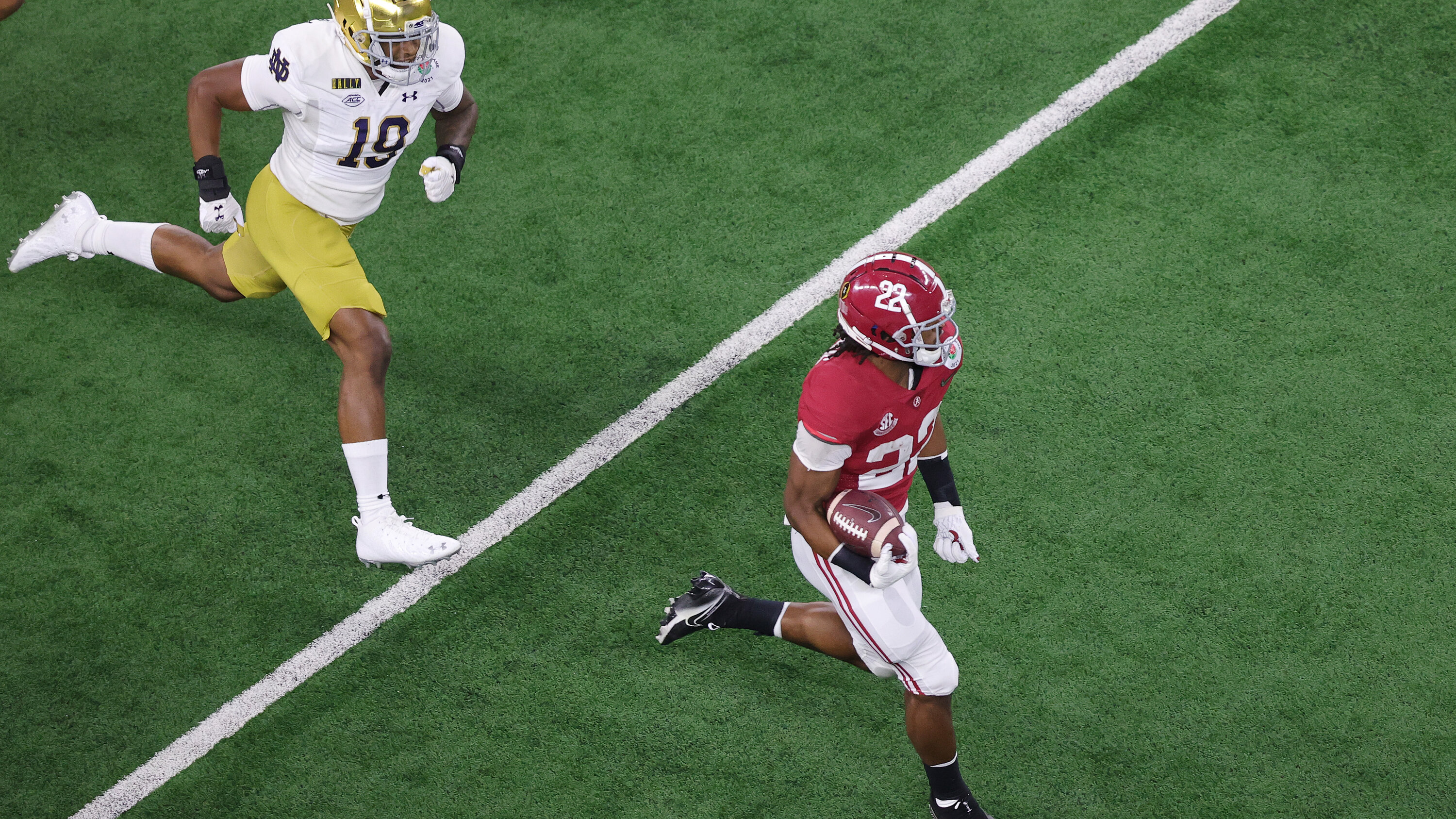