NEW DELHI — India said on Sunday that it had approved two coronavirus vaccines, one made by AstraZeneca and Oxford University and the other developed in India, for emergency use, a major step toward halting the spread of the coronavirus in one of the world’s hardest-hit countries.

The approvals were announced at a news conference in New Delhi on Sunday. Dr. V.G. Somani, the drugs controller general of India, said the decision to approve the Oxford-AstraZeneca vaccine and a local vaccine developed by Bharat Biotech came after “careful examination” of both by the Central Drugs Standard Control Organization, India’s pharmaceutical regulator.

Indian regulators are still considering approvals for other vaccines. One, made by Pfizer and BioNTech, has already been approved in the United States and Europe. Another, Russia’s Sputnik V, appears to be less far along.

Officials in India moved quickly for a number of reasons. The country is No. 2 in confirmed infections behind the United States, and the outbreak is widely believed to be worse than the official figures suggest. The pandemic has devastated the economy, and the unemployment rate is at a 45-year high. Education has been disrupted, leading to worries about the long-term impact on the country’s youth.

India will now face some steep challenges. Doses for more than 1.3 billion people must be paid for and distributed across a vast country. Government officials could also face doubts among the public about the safety and efficacy of the vaccine, fueled in part by the government’s lack of transparency about clinical trial protocols.

Criticism about the lack of clarity on the data that the regulator examined came swiftly after the two vaccines were authorized for emergency use.

All India Drug Action Network, a public health watchdog, immediately issued a statement requesting more information about the scope of clinical trials and dosing regimens for both vaccines.

On the Bharat Biotech vaccine, called Covaxin, the group said it was “baffled to understand what scientific logic has motivated the top experts” to authorize a vaccine still in clinical trials.

Dr. Somani, the regulator, said the vaccine had so far been administered to 22,500 trial participants, and “has been found to be safe.”

Both the AstraZeneca vaccine and the Bharat Biotech vaccine require two doses, Dr. Somani said. He did not specify whether the participants in Bharat Biotech’s continuing clinical trials had received both doses.

Already the effort has faced setbacks. The Serum Institute, an Indian drug maker that struck a deal to produce the Oxford vaccine even before its effectiveness had been proven, has managed to make only about one-tenth of the 400 million doses it had committed to manufacturing before the end of the year.

The government says it is ready. To get the vaccine across a country famous for its size and its sometimes unreliable roads, officials will tap into knowledge from nationwide polio vaccination and newborn immunization campaigns, and the skill and flexibility employed in India’s mammoth general elections, where ballot boxes are delivered to the furthest reaches of the country.

The Serum Institute says it is on track to increase production of the vaccine, which is known as Covishield in India. With $270 million of its own funds and $300 million from the Bill and Melinda Gates Foundation, Serum plans to ramp up manufacturing capacity to 100 million doses per month by February, said Mayank Sen, a company spokesman.

Initially, the Serum Institute signed a pact with AstraZeneca to make one billion doses of the vaccine for low-and-middle-income countries. The vaccine holds appeal to developing countries because it is cheaper to make and easier to transport than those that require colder temperatures during storage and transportation.

The Serum Institute hit production delays as it built new facilities to make the vaccine. It says it has already produced between 40 million and 50 million doses for the world. The company’s chief executive, Adar Poonawalla, told reporters on Monday that a majority of the doses would be given to India.

Indian officials have been vague on how many doses they expect to receive and when. Mr. Sen said the Serum Institute did not have a firm agreement with the Indian government, but had pledged to reserve most of its existing stockpile for India.

“Government has yet to sign the papers and the final dotted line, but this is based on initial discussions we have had because we’ve always said that India was going to be the priority,” Mr. Sen said.

Pending approval of the vaccine by the World Health Organization, Serum will begin supplying other developing nations with doses at manufacturing cost, Mr. Sen said.

India’s approval process has also been delayed. The Serum Institute applied for emergency use approval early last month, but regulators asked for additional details from clinical trials, including whether a person involved in the trials had experienced medical complications.

The details of that claim are not clear. After receiving the Covishield vaccine on Oct. 1, a 40-year-old volunteer from Chennai, India, publicly reported neurological symptoms in a legal notice to the Serum Institute. The company responded by threatening a defamation suit and demanding the trial volunteer pay about $13.7 million. While negative health effects from vaccine trials are rare, health experts said the Serum Institute risked fostering misinformation by appearing to punish somebody for speaking out.

Mr. Poonawalla said on Monday that the Serum Institute had submitted the additional information regulators had requested. It has denied that the problems reported by the trial participant in Chennai had anything to do with Covishield, but has declined to comment on accusations of trying to intimidate that person.

Indian officials have laid out an ambitious plan to inoculate the country’s huge population, which they have said would be the largest such effort in the country’s history.

India plans to begin a vaccination campaign in the first three months of the year that will cover about one-quarter of the population by August. The first 30 million people inoculated will be health care providers, then police and other frontline workers. For the remaining 270 million people, the authorities will focus on those over 50 or who have conditions that might make them more vulnerable.

The rest of the population will be immunized based on vaccine availability and the latest science.

The country has made strides in recent years. In the fight against polio, government officials aimed information campaigns at religious leaders, helping to nearly eradicate the disease. According to one study, a mass measles vaccination campaign saved the lives of tens of thousands of children between 2010 and 2013.

For the coronavirus campaign, the national government has asked states to prepare vaccination strategies. Some have formed task forces at the state, district and block levels. Over 20,000 health workers in about 260 districts have been trained so far to administer the vaccine, the Indian Health Ministry said.

The government plans to use the framework of its universal immunization program for pregnant women and newborns — one of the largest and cheapest public health interventions in the world.

India’s civil aviation minister, Hardeep Singh Puri, said on Tuesday that airlines, airports and ground handlers had been asked to draw up plans for transporting vials of vaccines at cold temperatures.

This week, health workers in four Indian states carried out an exercise to iron out any wrinkles. Health officials in different places handed out over 100 placebo vaccine doses to trainers. They then tracked the doses’ temperatures through the journey from train depot to vaccination site, as well as the time and whether they reached the intended patients.

India will still need to improve its ability to store and move vaccines in temperature-controlled conditions — known as a cold chain network — as well as improving distribution methods and training new workers.

India may have to double the number of health workers from the current 2.5 million, said Thekkekara Jacob John, a senior virologist in the southern state of Tamil Nadu.

“This is a herculean task,” Mr. John said of the vaccine effort. “And the challenge is not going to densely populated cities but the rural areas — home to real India.”

Government officials will also have to put a stop to rumor-mongering, he said. Chat groups on WhatsApp, the Facebook-owned messaging service that is widely used in India, have already become home to misinformation about side effects.

One month ago, Prime Minister Narendra Modi urged citizens to keep an eye out for those trying to spread rumors about the vaccine, which he called “anti-national and anti-human,” and urged politicians to help raise awareness.

Mr. Modi renewed that appeal on Thursday, casting the continuing fight against the virus as one against an unknown enemy.

“Be careful about rumors,” he said, “And as responsible citizens, refrain from forwarding messages on social media without checking.” 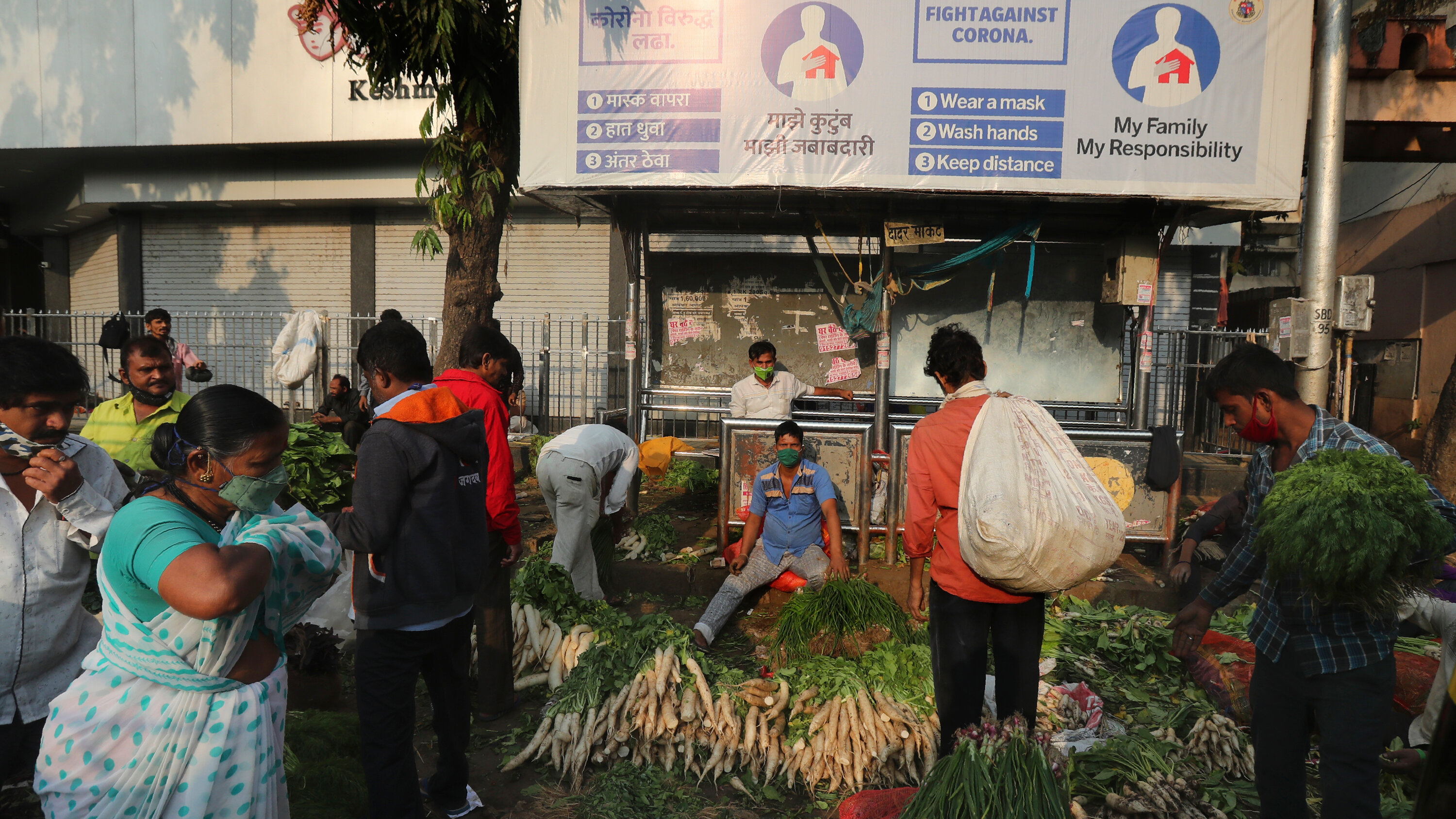 The Everyday Chemicals That Might Be Leading Us to Our Extinction