Georgia’s runoff election on Tuesday will have dramatic consequences, deciding whether Republicans or Democrats control the Senate. In an environment of heightened civic engagement for athletes, two of Atlanta’s pro teams have been rallying voters there in starkly different ways.

The Atlanta Dream have been at the forefront of the W.N.B.A.’s active campaigning for the Rev. Raphael G. Warnock, a Democrat, whose opponent, Senator Kelly Loeffler, a Republican, has disparaged the Black Lives Matter movement and is a co-owner of the team. Players for the Dream have criticized the senator and worn “Vote Warnock” shirts to games. His campaign said their actions led to more than $236,000 in online donations in the three days after they wore them.

The Atlanta Falcons took more of an impartial approach, and it highlighted the gulf between the W.N.B.A.’s open progressivism and the N.F.L.’s uneasy embrace of politics. Falcons players promoted voter education and registration, but they avoided using the names of the candidates running for Georgia’s two Senate seats in their messaging so as not to polarize fans.

“The focus wasn’t to get you to vote for this candidate or that candidate,” said defensive end Steven Means, a leader on the Falcons’ social justice committee. “The message would get drowned out if our personal beliefs came to the front.”

Though the Falcons made a commitment to greater action against injustice this season, a journey The New York Times has followed, the team’s players said they never discussed using their popularity to try to tip the outcome of the elections, let alone more aggressive steps like walking out of games, which N.B.A. players did, or calling out team owners who support President Trump, who has been a vocal antagonist of N.F.L. players protesting social injustice.

Instead, from their first meetings in July, the players took their cues from John Lewis, the civil rights leader and congressman who died that month, and Carolyn DeWitt, who runs Rock the Vote, a nonprofit group that empowers young people to vote.

In a virtual seminar, DeWitt told the players about the shortage of poll workers caused by older volunteers opting to stay home because of the coronavirus pandemic. The players agreed that everyone in their locker room could support a get-out-the-vote campaign that also encouraged people to work at the polls. The players wouldn’t have to declare a political allegiance, and their effort could have an impact beyond the current election cycle.

“By doing that, we got way more participation,” said Ricardo Allen, a Falcons safety who added that many players were uncomfortable talking about politics, long a third rail subject in professional football. “We were trying not to draw a line, no ‘you versus us.’ We wanted it to be more of a lasting thing.”

The strategy was a big reason the team’s social justice committee, which Allen helped form in 2017, tripled in size to a dozen players, and notably included quarterback Matt Ryan and other white players, who had said little publicly about issues of race or police brutality.

Unlike the players on the Dream, who have openly battled their owner and pushed the league deeper into a fractious political race, the Falcons were applauded by their team owner, Arthur M. Blank, as well as the N.F.L., which unveiled an “N.F.L. Votes” campaign to promote the league’s get-out-the-vote efforts.

“It’s not like playing a game in 60 minutes and it’s over,” Blank said he told the players before Election Day. “You can’t just assume we made progress this year, let’s move on. When you’re dealing with these social issues, it takes a long time. It takes a sustained effort. You can’t do a one-and-done.”

The Falcons’ anodyne approach to activism was a big step for a league still smarting from being a pinata in the national debate over players kneeling during the playing of the national anthem, which centered on Colin Kaepernick’s protest beginning in 2016. Since being prodded by its Black players to do more to address racial injustice, the N.F.L. has committed to support social causes, donating tens of millions of dollars to groups fighting social injustice chosen by players.

But it wasn’t until June, after Patrick Mahomes and other stars urged the N.F.L. to denounce police violence against people of color, that Commissioner Roger Goodell said that Black lives mattered and offered a veiled apology to Kaepernick, who hasn’t played since the 2016 season, when he became the first player to kneel.

W.N.B.A. players began demonstrating against police brutality that year, too. But after initially fining those players, the league reversed course and now supports players who have leaned into more progressive causes. In 2018, for example, the W.N.B.A. joined with Planned Parenthood to send a portion of ticket proceeds to Planned Parenthood and other groups. And last summer, the league dedicated its season to Breonna Taylor, the 26-year-old Black woman who in March was killed by the police in Louisville, Ky.

The leagues’ stances on player activism reflect how they perceive their fans, said Amira Rose Davis, who teaches African-American studies at Penn State.

“The W.N.B.A. is coded as younger, more urban, more woke,” she said. The N.F.L. has “an ownership model that is more conservative and imagines its demographic as older and more conservative.”

Basketball is also driven by recognizable stars with massive social media followings, and leagues are hesitant to try to muzzle them, Davis added. Football has its own stars, of course, but N.F.L. players’ careers, on average, last about three years, and they wear helmets that make them largely indistinguishable to television viewers.

Economics also play a role in how far N.F.L. players are willing to stick out their necks for political causes. Few players have fully guaranteed contracts, and teams do not need much of an excuse to release a player.

Several Falcons said some players calculated how much money they had in the bank when considering whether to speak out on contentious topics. They pointed not just to Kaepernick, who hasn’t played in four years, but also to Eric Reid, who continued kneeling after Kaepernick.

“I know for sure that’s a big reason a lot of players don’t say anything,” Allen, the Falcons safety, said. “To a lot of dudes, they just stay in the back. They’ll talk when it’s quiet, but in a group, they won’t talk.”

Allen and other members of the social justice committee said they were aware of what players in other leagues have done. That includes players on the Dream who have continued to call out Loeffler and support Warnock even after their team tried to defuse the tension by declaring that it wasn’t “a political entity.”

Falcons players said they admired how LeBron James helped persuade other N.B.A. players to continue to sit out playoff games after the Milwaukee Bucks initiated a walkout in response to the police shooting of Jacob Blake in Kenosha, Wis., in August. And they saw how the Atlanta Hawks turned their N.B.A. arena into a polling spot for the election in November. (The Falcons did the same at their stadium for the Senate races.)

Even with a green light from their owner and head coach, and the league at least publicly more tolerant of player activism, the Falcons still chose to tack to the middle.

“We were steering our own ship,” said defensive end Charles Harris, who was a part of a group of football players at the University of Missouri who threatened to skip team activities to protest the way the university handled racial tensions in 2015. “We weren’t trying to race ahead of another league. It was all about what we wanted to do. And the only thing we weren’t going to talk about was politics.”

Harris acknowledged that it would be difficult to determine whether the Falcons’ get-out-the-vote initiative succeeded, given its amorphous goals. The players spoke to hundreds of high school students in Georgia, and about a dozen signed up to work at polling stations. It will take years to determine whether those students remain civically engaged.

Some critics contend that the N.F.L. is skilled at trying to disarm controversies, as in 2014, when the league produced public service announcements denouncing violence against women after Ray Rice, the former Baltimore Ravens running back, was shown on video punching his fiancee unconscious.

The league’s statement gave players cover to speak out in limited ways, as did the My Cause My Cleats campaign, in which players were allowed to bend uniform rules and wear slogans supporting an issue.

This season, the N.F.L. stenciled “End Racism” and “It Takes All of Us” in end zones and let players wear the names of victims of systemic racism and police brutality on the backs of their helmets. Ryan Clark, who spent 14 seasons with the Giants, the Steelers and Washington and who is now an analyst at ESPN, called the displays window dressing.

“A lot of it to me has been surface,” he has said. “We’ve just used symbols. We just put ‘Black Lives Matter’ in the end zone. We do certain things to make people feel as if we’re making a move, but we aren’t.”

Clark said the Hawks took a far bolder step toward addressing systemic racism when the team borrowed $35 million from Black-owned banks in April 2020 to refinance a loan on their practice facility. Clark, a board member of the National Black Bank Foundation, said he hoped other teams would follow. That decision, though, was made by the team’s ownership and came six years after the team’s former lead owner, Bruce Levenson, was compelled to sell his stake after racist emails he had sent became public.

For now, with Blank’s support, Falcons players will remain focused on the long game of getting young people to vote.

“Here, with the owner and the entire organization supporting you, you feel comfortable to say what you truly feel and express that in the most respectful way, to have the freedom we have, but not go crazy with it,” Means said. 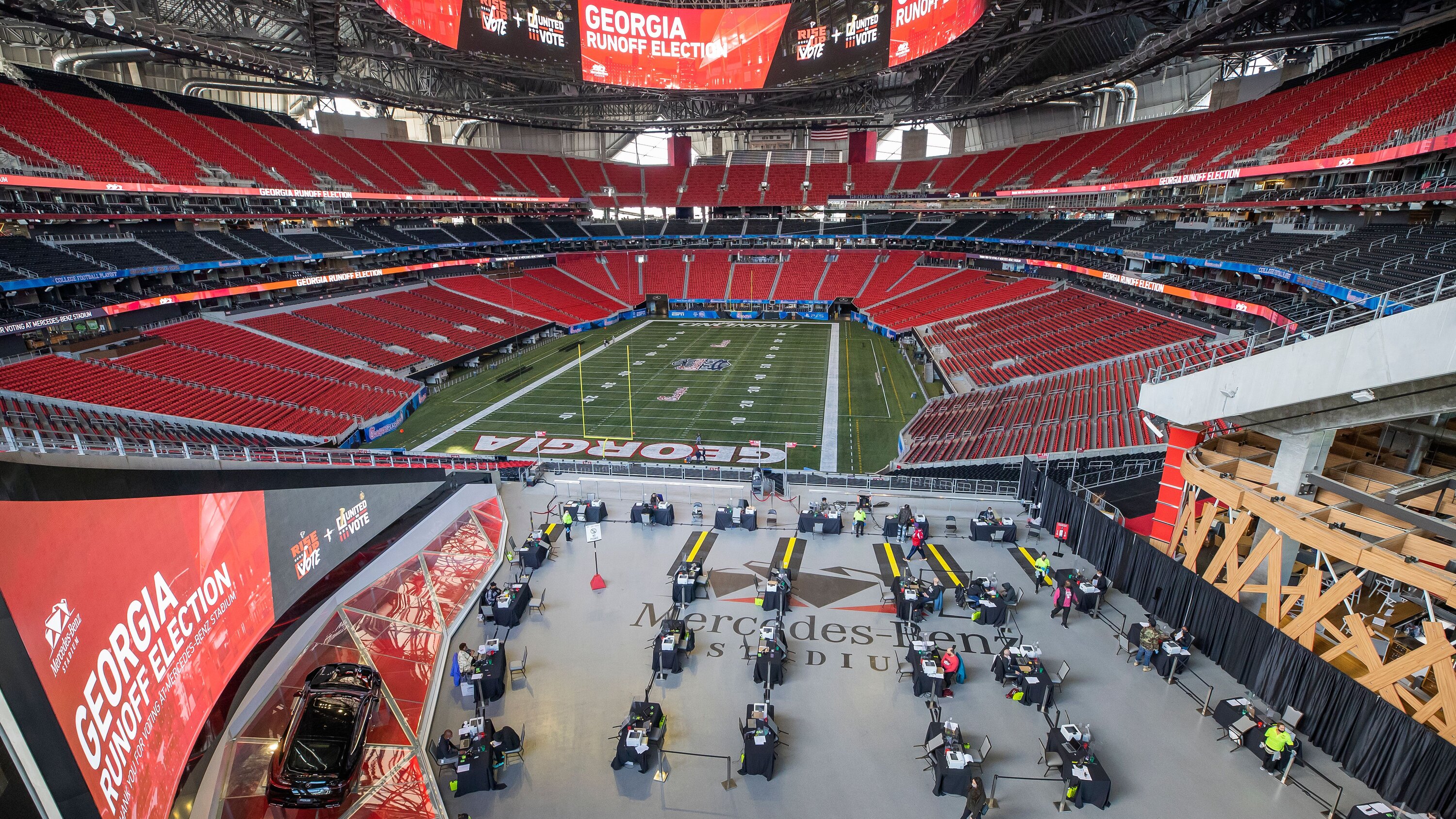