Top Prospects Take an Unconventional Path to the World Juniors

Each holiday season, the World Junior Championship offers hockey fans a preview of the next wave of young stars heading to the N.H.L. Over the last decade, the tournament’s most valuable players have included the Rangers’ first overall pick Alexis Lafreniere (2020), Filip Forsberg of the Nashville Predators (2014) and John Gibson of the Anaheim Ducks (2013).

For the players, the under-20 tournament represents the culmination of nearly a lifetime’s worth of work — and sometimes, an unusual road to get there.

Often, youth hockey development happens relatively close to home. Canadian teenagers typically live with billet families when they start to play in one of the three regional major junior leagues that make up the Canadian Hockey League. Top United States prospects may aim for a well-established hockey prep school, often in their home region, with their sights set on joining the national team development program in Plymouth, Mich., at age 16.

In Europe and Russia, many players climb a ladder within one organization, playing youth hockey, under-20 and men’s league on affiliated teams, often in their home regions.

At this year’s world juniors, which will end with Tuesday’s final in Edmonton, Alberta, some players from both sides of the Atlantic have bucked convention, packing their bags at young ages to pursue dreams of gold medals and careers in the N.H.L.

For example, defenseman Yan Kuznetsov and left winger Vladislav Firstov, sophomores at the University of Connecticut, became the first two N.C.A.A. players to suit up for Russia at this tournament.

The Russian hockey program typically encourages top stars to remain at home for as long as possible before jumping to the N.H.L. Kirill Kaprizov, for instance, starred at the 2017 world juniors and fueled the gold medal win by the Olympic Athletes From Russia at the 2018 Olympics. But Kaprizov, drafted in 2015 by Minnesota, had played in Russia’s top-level Kontinental Hockey League for the past six seasons before signing an entry-level contract with the Wild in July 2020.

Over the years, only a handful of Russians have ventured stateside to continue their development — and their education. Firstov was 17 and Kuznetsov just 16 when they arrived in North America, spending the 2018-19 season in the United States Hockey League before joining the Huskies in the fall of 2019.

Both second-round N.H.L. draft picks — Firstov by the Wild in 2019 and Kuznetsov by the Calgary Flames in 2020 — play key roles for UConn.

“Yan is a defenseman who plays a lot of big minutes for us,” UConn Coach Mike Cavanaugh said. “He’s a physical presence back there, and I don’t think he’s even scratched the surface of his offensive capabilities here at UConn. Vlad, from Day 1, has been able to put up points, and he’s just dynamic offensively.”

Kuznetsov has been steady on the blue line, averaging more than 16 minutes a game as Russia’s team advanced to Monday’s semifinals against Canada. Firstov’s ice time has been limited in a deep forward group. Neither has hit the score sheet.

“That’s going to be a learning experience for him as well,” Cavanaugh said of Firstov. “He’s used to playing a lot of minutes. I think as you keep climbing up the ladder, playing at higher levels, that can happen sometimes.”

For Canada, Dawson Mercer is looking to collect his second world juniors gold medal, following a win as an 18-year-old last year when the tournament was held in the Czech Republic.

His road to the tournament started in his tiny hometown, Bay Roberts, Newfoundland, and wound through the Quebec Major Junior Hockey League via a prep school just outside Montreal.

Rather than choose a school in Ontario or in New England, Mercer, a forward selected in the first round of the 2020 draft by the Devils, left home at age 14 to pursue his hockey dreams at Bishop’s College School. “It was a big choice for me to go to a different province, move away at a young age and go to prep school,” he said. “It was a great experience for me.”

Bishop’s College School was established in 1836, but its hockey program doesn’t have the history of more established programs. After prospects like Mercer and Noah Dobson, a 2018 first-round draft pick, came out of the program, that’s changing.

Greg McConnell became the school’s director of admissions in 2013 and established under-16 and under-18 hockey programs. A Prince Edward Island native, he relied on his regional contacts to land one of the province’s most promising prospects, Dobson, in his first year on the job.

Mercer followed in those footsteps. “Dobson’s a pretty unbelievable player,” Mercer said. “I knew he was a top guy that went there also, and I really wanted to be the next one.”

After going pointless in a depth role at the world juniors last year, Mercer recorded five points in Canada’s first five games this year, shuffling through different roles within a forward group entirely made up of first-round picks.

While Mercer went to an up-and-coming prep school program, Cam York and Brendan Brisson of Team U.S.A. spent time at the fabled Shattuck-St. Mary’s School in Faribault, Minn. But growing up in California made their paths as prospects distinct.

Traditionally, most top U.S. hockey players have hailed from New England, Michigan or Minnesota. Over the last generation, that has started to change.

In Southern California, the catalysts for the sport’s growth were Wayne Gretzky’s 1988 trade from the Edmonton Oilers to the Los Angeles Kings and the debut of the expansion Anaheim franchise in 1993.

Watching the Ducks started York’s passion for hockey. But a lot of his skills were honed off the ice, spending two hours a day on a roller hockey rink in his backyard.

“I got so good, playing in my backyard, that it just translated when I was on the ice,” York said. “My first game, I think I realized that I was pretty good at this, and I wanted to continue to pursue this. I was in love with the game.”

Drafted 14th over all by the Philadelphia Flyers in 2019, he is just the second California-raised player to captain a U.S. world juniors squad, after Jonathon Blum in 2009.

York and Brisson, who are also teammates at the University of Michigan, joined elite N.H.L. talents like Sidney Crosby, Nathan MacKinnon and Jonathan Toews as players who came through Shattuck-St. Mary’s.

Those three N.H.L. stars also share the same agent — Pat Brisson of Creative Artists Agency, Brendan’s father. Growing up, Brendan and his younger brother Jordan grew accustomed to seeing these players and others during the off-season.

“I remember Nathan MacKinnon, when he was staying at my house, how many pucks he shot, how he was always outside in my backyard — we had a little net to shoot at,” Brendan Brisson said. “And Sidney Crosby cheering, when he came, and making my dad pass pucks into his skates. He told me you never get a perfect pass.”

But even with tips and support from N.H.L. superstars, Brisson was a late bloomer. Thanks to a long-awaited growth spurt and a boost in confidence, his game came together in the 2018-19 season, when he led Shattuck-St. Mary’s under-18 team with 101 points in 55 games. That set the stage for his being selected in the first round by the Vegas Golden Knights in the 2020 N.H.L. draft, two weeks before his 19th birthday.

“When we would first play out in Cali, he was just an average player,” said York, who played against Brisson at the youth level. “He’s come so far in such a short amount of time.”

Two other Californians are also on this year’s U.S. roster — defenseman Ryan Johnson, a first-round pick of the Buffalo Sabres in 2019, and goaltender Dustin Wolf, a Calgary Flames 2019 selection.

The current generation has benefited enormously from top-level N.H.L. players who stayed in California in retirement. With the Junior Ducks, York and Johnson were coached by Johnson’s father, Craig, who played 10 years in the N.H.L., as well as the Hall of Fame defenseman and three-time Cup-winner Scott Niedermayer.

On the Junior Kings, Brisson and Wolf were coached by the Los Angeles Kings’ current general manager, Rob Blake, also a Hall of Famer and Cup champion, and their current director of player personnel, Nelson Emerson, a veteran of 771 N.H.L. games.

After a disappointing world juniors debut in 2020, when Team U.S.A. was shut out by Finland in the quarterfinals, York has shone this time around. He was second in scoring among defensemen with six points in five games heading into a semifinal against Finland. Playing down the lineup, Brisson has two goals in five games. 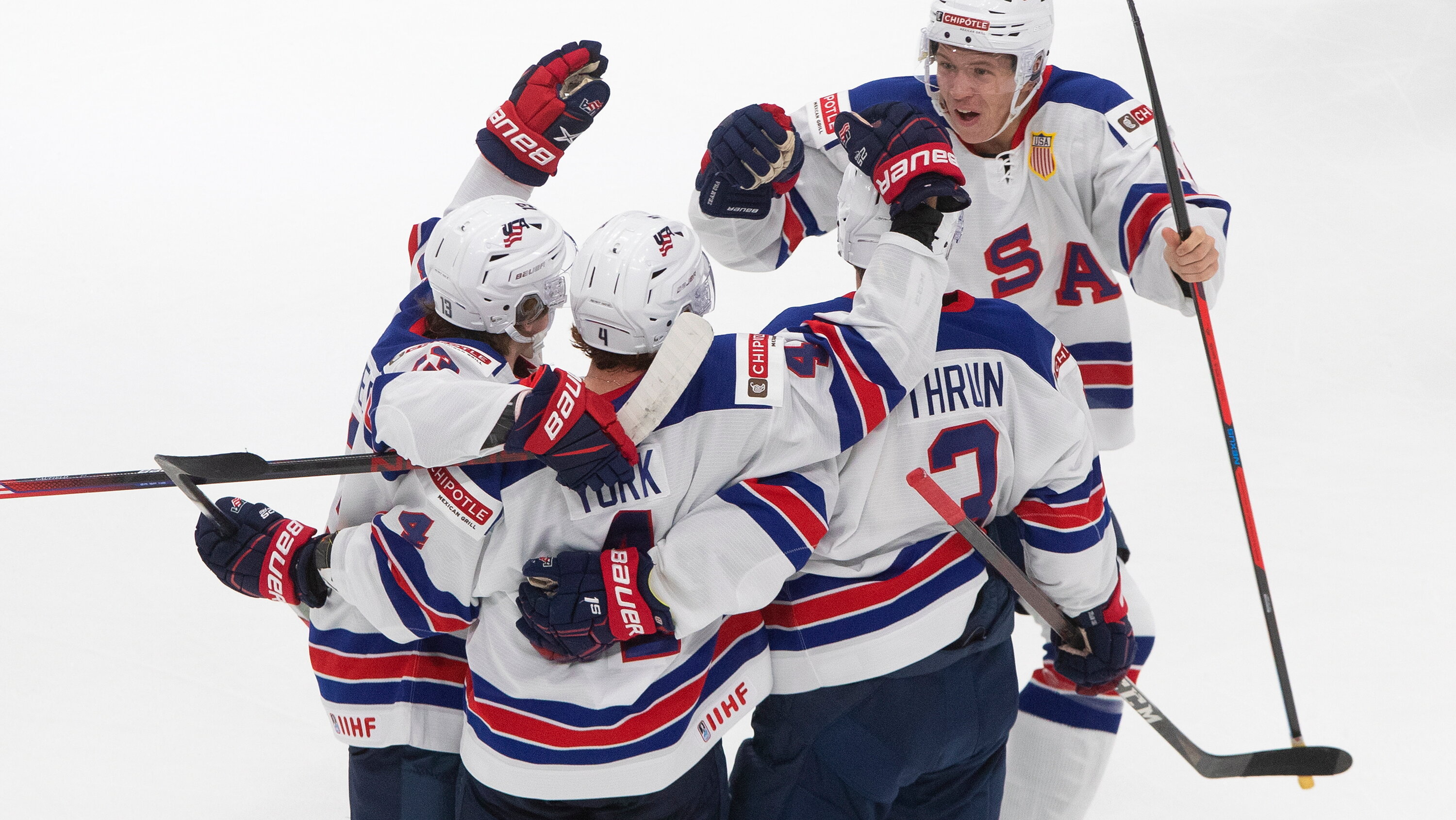