Smith, a senior, was the first wide receiver to earn the Heisman since 1991, when Desmond Howard of Michigan captured the award in a landslide. Smith is Alabama’s third winner in 12 seasons.

Smith’s victory was announced during a virtual ceremony, a coronavirus pandemic-necessitated departure from the ritual of an event in New York. Smith and the other finalists — the quarterbacks Mac Jones of Alabama, Trevor Lawrence of Clemson and Kyle Trask of Florida — did not know for certain that they were the top candidates until Dec. 24.

But neither Smith’s win nor his standing as a finalist was a surprise around college football.

Indeed, Smith’s name had been “writ in crimson flame,” as Alabama’s fight song goes, since his freshman year, when, during a duel with Georgia for the national championship, he caught a touchdown from Tua Tagovailoa on second and 26 to seal the title in overtime.

As a sophomore, he recorded 693 receiving yards. As a junior, 1,256 — enough that he considered skipping his senior season and entering the N.F.L. draft. He concluded, though, that he had “unfinished business to take care of,” which he suggested was as much a nod toward earning a degree as it was about football, and remained in Tuscaloosa.

He earned a degree in education over the summer and then came the season. He excelled in the first four games, even as he split duties with Jaylen Waddle, another star receiver. But Waddle was injured on a kickoff during the fifth game, and Alabama shifted far more of the season’s burden to Smith.

“It created a unique opportunity for DeVonta Smith to be a guy where we had been spreading the wealth around so much here for the last couple of years that, all of a sudden, now he can become a real feature guy,” said Steve Sarkisian, Alabama’s offensive coordinator and the incoming coach at Texas.

“He’s a guy that understands the game big picture, not just in one position or another,” Sarkisian said. “He recognizes coverages really well, so it’s allowed us to move him all over the field, whether it’s in the slot, isolation-type plays, in bunches. And the reality of it is he knows why we’re calling what we’re calling and what we’re calling those things for.”

Smith’s Heisman campaign accelerated on Dec. 5, when Alabama visited Louisiana State and the wideout had 231 yards and a trio of touchdowns. He averaged almost 29 yards per catch that night, though his finest came as halftime approached and Jones, having already steered Alabama to a 38-14 edge, took a snap from L.S.U.’s 20-yard line.

As Jones backpedaled, Smith hustled toward the end zone, shadowed by a cornerback who was an All-American just last season. Smith leapt backward, reached up and corralled the ball with a white-gloved right hand.

Smith said last week that the play had not stood out any more than others.

“My favorite moment has been games where it’s been a tough game, we’ve been in a dogfight, and this team just kept coming together and we kept believing in each other — offense believed in the defense, defense believed in the offense,” he said. “And we just kept fighting as a team. So no moment of me specifically, just moments of this team being one.”

On Dec. 19, two days before the Heisman voting deadline, he logged 15 catches, a Southeastern Conference championship game record, and 184 receiving yards in a win over Florida, adding to his Alabama records.

Up to 927 electors, including living winners of the award and 870 members of the media, were eligible to cast Heisman votes this season. (The New York Times does not participate in the balloting.) Smith won 447 first-place votes, just more than double the tally of Lawrence, who finished second in the race. Jones placed third, followed by Trask.

Mike Locksley, Maryland’s coach and a former offensive coordinator at Alabama, said on Tuesday that he was unsurprised by Smith’s trajectory into the sport’s elite and suggested he was the rare superstar who would be remembered as a locker-room favorite.

“He’s humble, he doesn’t complain, he doesn’t make excuses,” said Locksley, who remembered when Alabama mulled whether a cooperative Smith should play defense before realizing he was too valuable as a receiver. “He’s the epitome of what a teammate should be.”

Asked after the semifinal whether he would have a big family gathering for the Heisman ceremony, Smith hinted that he saw this week’s presentation as something of a distraction from preparing for the championship game on Monday night.

“Just get in and get out,” he said. “I’m not trying to have too many people around. Just trying to make it to the next game.” 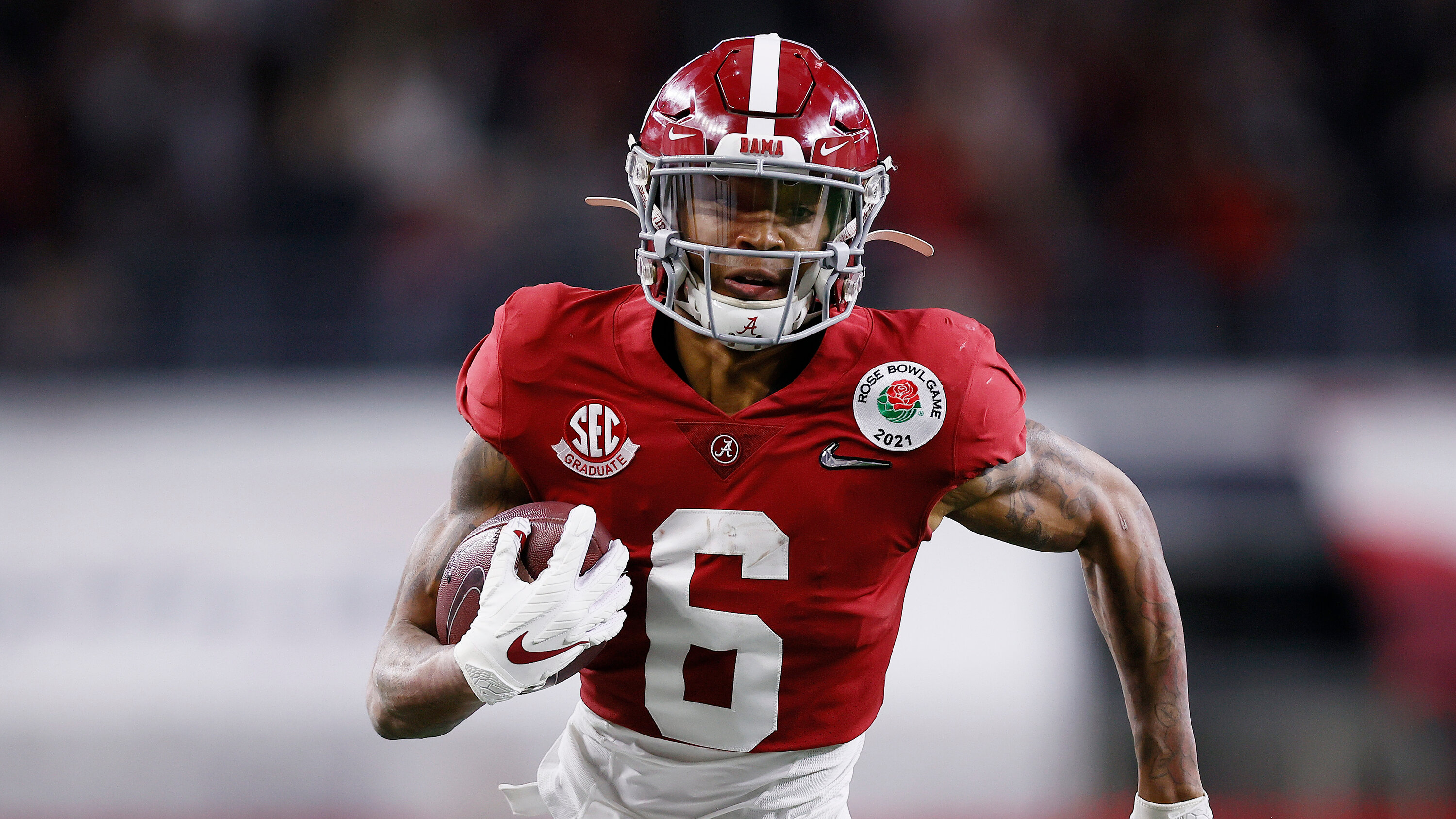