Home Sport Kelly Loeffler Is Done in the Senate. But What About in the...
Sport

Kelly Loeffler Is Done in the Senate. But What About in the W.N.B.A.?

On Tuesday morning, the Rev. Raphael Warnock made a final pitch to Senate-race voters in Georgia with a video on social media that prominently featured W.N.B.A. players campaigning on his behalf against the Republican incumbent, Senator Kelly Loeffler, who also happens to be a co-owner of a franchise, the Atlanta Dream.

The players got what they wanted. Warnock, a Democrat, defeated Loeffler, who owns a 49 percent stake in the Dream. This was an outcome that six months ago would have been considered an upset. The attention W.N.B.A. players brought to Warnock’s campaign is widely considered to have played a role in his victory.

Now, with the Senate race over, the question turns to what’s next for the players and the league — and to what should be done about an owner who publicly blasted her own players and who, as she embarked on a political campaign with tactics that many considered to be racist, said the values of the W.N.B.A. did not align with her own.

News of Warnock’s victory on Tuesday was greeted with glee by many basketball fans and W.N.B.A. players, several of whom posted celebratory messages on social media.

“This isn’t the first time that we’ve seen an owner or even a sponsor of a team not align with a team’s thought process,” Dream guard Renee Montgomery said in an interview Wednesday. “So it’s always going to be a battle, but right now I’m just excited for a win.”

W.N.B.A. Commissioner Cathy Engelbert told CNN over the summer that she would not force Loeffler to sell her stake, even though the league’s players’ union has indicated it does not want her to own the team any longer. Loeffler has said repeatedly that she is unwilling to sell and called herself a victim of “cancel culture” as players were speaking out against her.

A representative for Loeffler did not respond to a request for comment.

This leaves the league at an uncomfortable impasse. The majority owner of the team, Mary Brock, has been exploring a sale of the Dream, but it is unclear how far those discussions have gone. It is also unclear what role Loeffler has in those negotiations or whether her stake would be part of a sale. In August, ESPN reported that Baron Davis, the former N.B.A. player, was part of an investment group interested in buying the Dream.

“The league is aware that discussions with potential buyers are ongoing,” Engelbert said in a statement on Wednesday. “Once those negotiations are concluded, additional information will be provided.”

Last July, Loeffler criticized the league for dedicating its 2020 season to social justice. The W.N.B.A., taking a cue from players like Angel McCoughtry of the Las Vegas Aces, said its games would honor the Black Lives Matter movement. At the time, Loeffler was trying to show her loyalty to President Trump in a race in which she was being attacked from the right by Trump’s preferred candidate for the seat, Representative Doug Collins.

Loeffler spent much of the rest of her Senate campaign lashing out at Black Lives Matter, accusing the movement of holding “anti-Semitic views” and promoting “violence and destruction across the country.” That prompted the W.N.B.A. players’ union to tweet: “E-N-O-U-G-H! O-U-T!“

Engelbert told ABC in July that “Kelly’s views are not consistent with those of the W.N.B.A. and its players.” Loeffler’s rhetoric also drew a response from all of the players on the Dream, who signed a letter saying that the team was “united in the movement for Black Lives.”

But Loeffler dug in. In August, led by players like the Dream’s Elizabeth Williams and the Seattle Storm’s Sue Bird, teams across the league took the dramatic step of wearing “Vote Warnock” shirts before games. The demonstration elevated Warnock’s profile among people who had not been following the race, and prompted a flood of donations to his campaign. The move came at a time when public polling put Warnock’s support at less than 10 percent and showed him in fourth place in a large field. Warnock’s fortunes turned, and he finished in the top two on election night in November, forcing a runoff required by Georgia state law after Loeffler did not receive 50 percent of the vote.

But Loeffler remains a member of the W.N.B.A. community; some players have said that this is untenable and that they hope she leaves the league of her own accord.

“If what she has said in all of her campaigning is true and her views are the way that she has made them out to be in the media, there doesn’t seem to be any benefit to her to be the only owner of a W.N.B.A. team,” Blake Dietrick, a guard for the Dream, said in an interview Wednesday. “That, in turn, means there is no benefit to us.”

Asked if the league should be more assertive if Loeffler does not sell her stake, Dietrick said: “I think that the issue changes a little bit when she’s no longer technically a public figure. If she isn’t campaigning or speaking those views that so vehemently contradict the league constantly in the media, maybe it’s slightly different. I’m hopeful that change happens. I know that there’s a lot of logistics that go on in terms of what the league can and cannot do.”

Montgomery, who sat out last season to focus on causes like police brutality and voting rights, said that she was reveling in Warnock’s victory more than thinking about Loeffler’s role with the team. But like Dietrick, she said she hoped that Loeffler would step aside on her own.

Montgomery said that she hadn’t decided whether to play next season, and she demurred when asked whether she would be uncomfortable playing on a team with Loeffler as an owner.

Loeffler and Brock bought the entity that owns the Dream in 2011, and have run the team since. Until recently, Loeffler was an active owner, attending games and having players over to her home. She told ESPN in August that she had lost around $10 million owning the Dream, or about a million dollars annually.

In October 2019, two months before she was appointed to the Senate seat formerly held by Johnny Isakson, Loeffler stepped down from the W.N.B.A.’s board of governors. Loeffler no longer has day-to-day involvement in the Dream but said in July that she had “no intention” of selling her stake. That was during the bruising primary, in which it may have been politically advantageous to be seen as resisting the demands of W.N.B.A. players.

The N.B.A.’s LeBron James added intrigue of his own to the discussion about changing the Dream’s ownership, posting on Twitter early Wednesday: “Think I’m gone put together an ownership group for the The Dream. Whose in? #BlackVotesMatter.” Montgomery voiced her approval: “I’m ready when you are.”

W.N.B.A. teams are rarely profitable, and most are controlled by the N.B.A. owner in the same city or by local groups who see the team as sort of a civic trust, as Loeffler and Brock did. “You don’t come to the W.N.B.A. because you think you are going to make a lot of money and get very wealthy,” Brock told Forbes in 2011.

Somebody like James, who has made over $300 million in his N.B.A. career, and hundreds of millions more in sponsorship deals, could certainly afford it. A spokesman for James did not respond to a request for comment on his interest in the Dream. 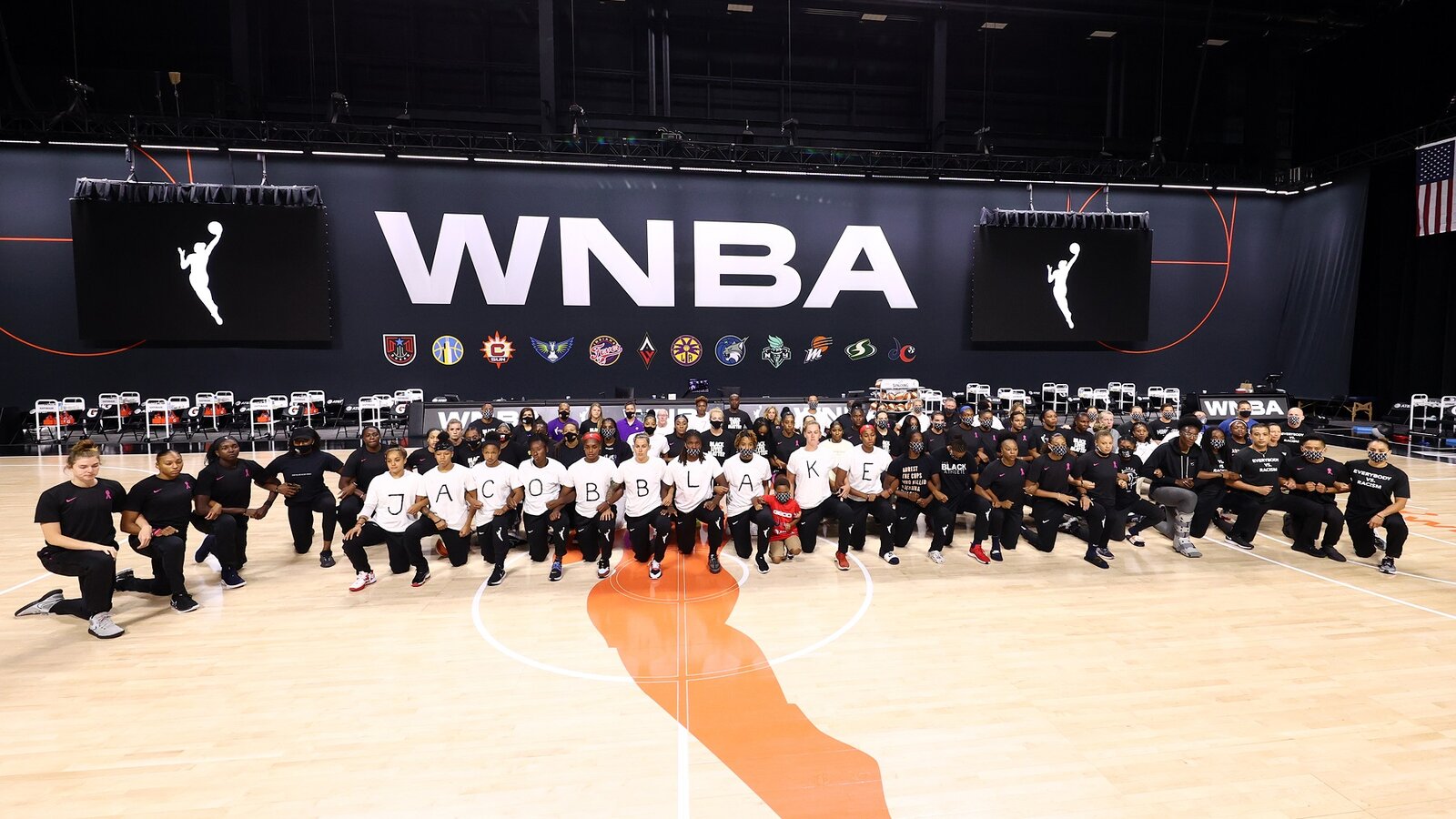 Facebook
Twitter
Pinterest
WhatsApp
Previous articleKelly Loeffler Is Done in the Senate. But What About in the W.N.B.A.?
Next articleVirus Cases at Ohio State Loom Ahead of National Championship Game