Curators Scour Capitol for Damage to the Building or Its Art

Barbara A. Wolanin did not leave her TV much on Wednesday afternoon, watching terrified, she said, as hundreds of Trump rioters rushed into the Rotunda of the U.S. Capitol building where eight large, framed historical paintings hang.

She once was curator for the Architect of the Capitol, the office that preserves and maintains the building’s art and architecture. She knew much better than most the horrific possibilities that were presenting themselves.

What if rioters slashed John Trumbull’s “Declaration of Independence,” one of the large paintings from the early 1800s that depict the American fight for freedom? Or smashed the bronze bust of the Rev. Dr. Martin Luther King Jr.?

“All the art in the Capitol is basically on view,” said Dr. Wolanin, 77, who served as Curator for the Architect of the Capitol from 1985 until she retired in 2015. “There aren’t a lot of things hidden away.”

For nearly four hours, the collection she had spent more than 30 years caring for was at the mercy of a mob that broke into rooms on the south side of the Capitol (including House Speaker Nancy Pelosi’s office), smashed windows and then marched through the National Statuary Hall, waving American, Confederate and “Trump Is My President” flags.

Their time in the building is now represented by the damage they left behind. A 19th-century marble bust of former President Zachary Taylor was flecked with what appeared to be blood. A picture frame was left lying on the floor, the image gone.

The photos and videos, some of them taken inside by the rioters themselves, were startling. One man crammed a framed photo of the Dalai Lama into his backpack, while another smoked marijuana in a room with maps of Oregon on the wall. A man in a leather jacket ripped up a scroll with Chinese characters.

“Yeah look at all this fancy furniture they have!” one man in a winter parka and red hat said.

By the time the Capitol Police had secured the building around 6 p.m., windows and doors at the historic building had been broken, offices had been ransacked and some furniture had been damaged, overturned or looted.

Detailed damage assessments from the Architect of the Capitol or the U.S. Capitol Police have yet to be released. But the singular works of art that curators consider the treasures of the building did not appear to have suffered any major damage.

It could have been much worse, Dr. Wolanin said.

Her greatest concern was the large-scale, 18-foot paintings by Trumbull and other artists that depict scenes from the republic’s founding in the Rotunda, and the dozens of statues that fill the National Statuary Hall to the south.

Safely inaccessible was “The Apotheosis of Washington,” a fresco on the Rotunda ceiling that shows the nation’s first president flanked by Liberty, Victory, Science, War and other allegorical figures.

Particularly vulnerable was the National Statuary Hall to the south of the Rotunda, which contains 35 statues of prominent Americans, part of a collection of 100 statues at the Capitol — two from each of the 50 states — that memorialize such notable figures as Samuel Adams, Rosa Parks and Thomas Edison.

The Capitol’s collection of paintings also includes work by artists such as Thomas Crawford and Constantino Brumidi, with a mix of portraits and landscapes. Original paintings of George Washington, such as one in the Old Senate Chamber, are some of the most treasured.

The building itself is a work of art, a paragon of Neoclassical architecture designed by Dr. William Thornton in the late 1700s and completed by the Boston architect Charles Bulfinch in 1826. But at the height of the riot, people were scaling its exterior using ropes, while others used poles as battering rams to break open an entrance. Inside, a pro-Trump loyalist posed on the Senate dais while another hung from the balcony in the chamber.

The history of the Capitol as a place is captured in the Hall of Capitols corridor of the House wing, in a series of murals by Allyn Cox. Eight milestone events from the building’s first 65 years and portraits of the nine men who were appointed Architect of the Capitol between 1793 and 1995 adorn the ceilings.

Dr. Wolanin said this was the first time the Capitol’s collection had been threatened on this scale. Though individual pieces had suffered “a tiny bit” of damage in the past, as when a gunman broke into the building in 1998 and killed two police officers and injured a female tourist before being captured, the last breach by a large, violent group of people was during the War of 1812 more than 200 years ago, when invading British troops burned down the building.

“They had no respect for any of these things,” Dr. Wolanin said of the mob that ransacked the building on Wednesday. “That’s what’s really scary.”

On Thursday, some historical preservationists discussed the damage, including the question of whether some of it should be left as a historical marker of the day.

Anthony Veerkamp, a former director of policy development for the National Trust for Historic Preservation, said some of the physical damage should be preserved “as a reminder that our monuments, our institutions, and our values are all vulnerable, and must be constantly cared for.”

But he noted that it was important to do in a way that did not grant the rioters hero status.

“It’s important to not inadvertently create a shrine that appears to commemorate the insurrectionists,” he said. 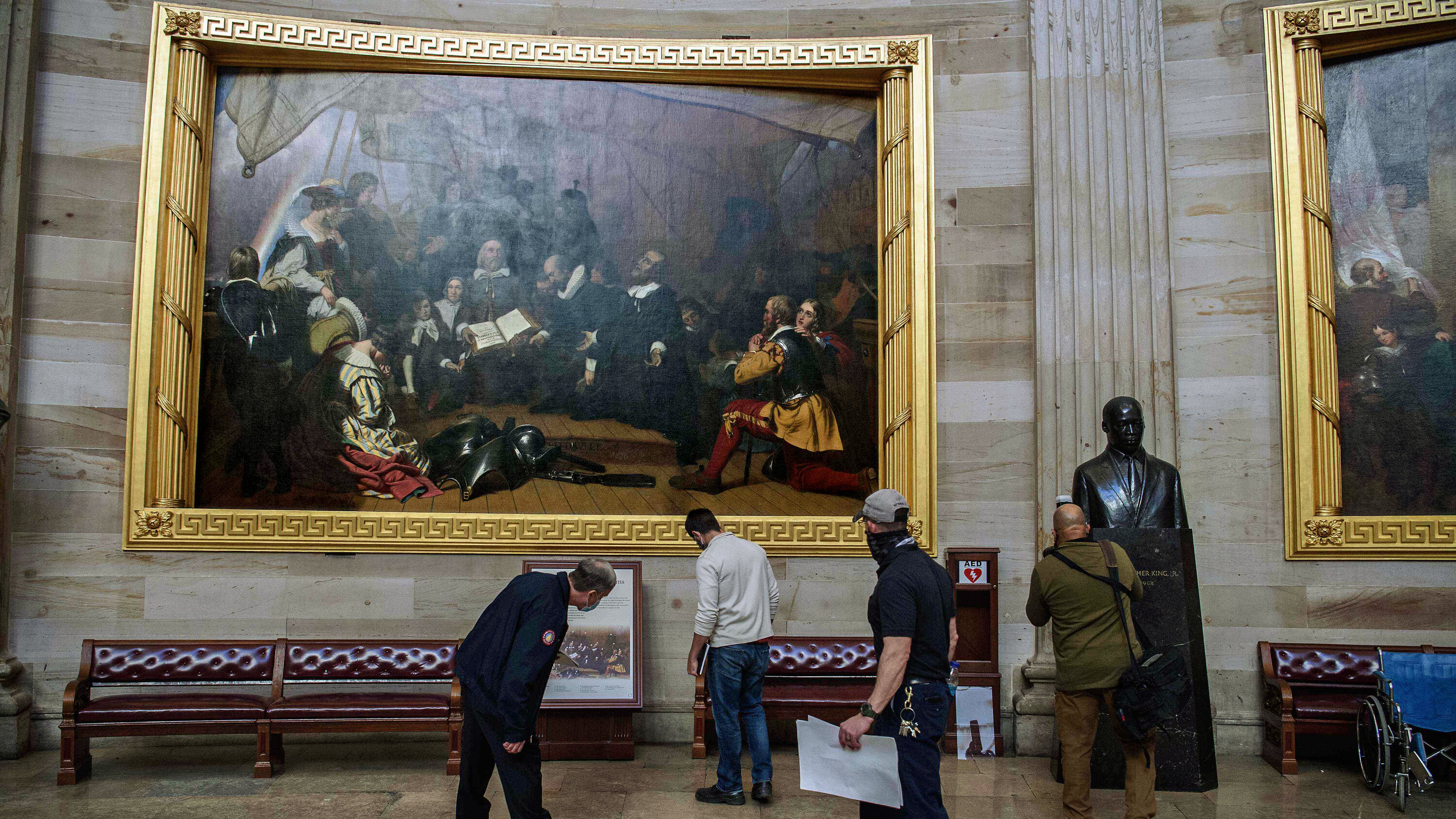