MOENGOTAPOE, Suriname — A cavalcade of black sport utility vehicles pulled up at a small village in a jungle clearing in a remote corner of South America. A tall, heavyset man with thick gold chains hanging over a tight shirt emerged from the largest car to a chorus of cheers.

The man, Ronnie Brunswijk, the child of subsistence farmers, had left the village of Moengotapoe in eastern Suriname in search of a better life 50 years ago. He was returning now as one of Suriname’s richest, most powerful and popular men, to bring electricity to his long-neglected community composed of the descendants of people who escaped slavery, known as Maroons.

Mr. Brunswijk last year became the first Maroon to reach the post of vice president of this small South American nation, perched between the Atlantic Ocean and the Amazon rain forest. Along the way, he had been an elite paratrooper, a soccer player, a wanted bank robber, a guerrilla leader, a gold baron and a father to at least 50 children.

His mother has said he has so many offspring that unknown people sometimes ask to hug her, claiming to be her grandchildren.

Mr. Brunswijk has been convicted of drug trafficking in Europe but has helped to bring democracy to his homeland. His generosity has earned him the nickname of Robin Hood and the worship of supporters, but has left many Surinamese questioning the source of his wealth and his political motives.

In many ways, Mr. Brunswijk epitomizes the contradictions of Suriname’s small, insular society, where lines between heroes and villains are in flux, where history instantly becomes myth and the people have learned that to keep social peace it pays not to ask too many questions.

“Everything I have, I give it to the people,” Mr. Brunswijk, 59, said in an interview in his office in a former colonial office overlooking Suriname’s staid capital of Paramaribo last month. “Ever since I was a child, I wanted to help others. I now have the chance to help the whole country.”

Dressed in a sumptuous suit and tie, Mr. Brunswijk projects the aura of an imposing statesman, guiding his impoverished nation to oil riches from newly discovered offshore deposits and improving the lives of Suriname’s marginalized Maroon minority.

It is a stark makeover for a man who used to shower supporters with money from a helicopter and whose mug shot was displayed in wanted posters across the country during the years of Suriname’s military dictatorship, which officially ended in 1988.

His unlikely life story is in many ways the story of Suriname’s turbulent journey through economic crisis and political violence since it emerged from Dutch colonial rule in 1975.

“Mr. Brunswijk has his history. We could look at his history and see that as a barrier,” said Suriname’s president, Chan Santokhi, a former police officer who tracked Mr. Brunswijk as a fugitive in the 1980s before asking him to form a coalition government last year. “We’re looking forward to a better future, because we are two leaders who have been entrusted to lead this nation together,” he said in an interview.

Mr. Brunswijk was born into a family of 10 surviving children, in one of Suriname’s poorest regions. The family lived mostly on the rice, cassava and bananas they managed to coax from the thin, sandy soil. The occasional meat came from the wild animals Mr. Brunswijk and his brothers stalked with cutlasses.

“Life was not great,” Agnes Brunswijk, the vice president’s mother, said in an interview outside her home near Moengotapoe. “We had to struggle.”

She said the family’s large size and meager resources taught Mr. Brunswijk at an early age to share with others, a quality that would become his hallmark. He was a “mischievous” boy, she said, who fought with neighboring children but also cut firewood for older people.

Mr. Brunswijk’s life changed when a Roman Catholic priest picked him, the only one among his siblings, to attend a boarding school in a nearby town at age 10.

“I didn’t see electricity until I went to the boarding school,” recalled Mr. Brunswijk.

Further studies eventually brought Mr. Brunswijk to Paramaribo, where in 1980 he said he was drafted into Suriname’s budding national army by Desire Bouterse, the military dictator who had recently seized power with a promise to sweep away the corruption of post-colonial rulers.

Singled out for his strength, Mr. Brunswijk became one of Suriname’s first 12 paratroopers and was sent for military training to Cuba, before being handpicked by Mr. Bouterse as his bodyguard.

The two men grew close, but Mr. Brunswijk said their relationship soured as the dictator began murdering political opponents and cracking down on the independent-minded Maroon communities.

“Maroon people don’t like being pressured,” Mr. Brunswijk said. “One day I said, ‘This is wrong.’ I had enough.”

The ensuing split has defined Suriname’s history ever since.

Mr. Brunswijk left the military in 1984, went on the run and began building his enduring Robin Hood myth, earning a conviction for bank robbery and armed theft and a reputation among Maroon villagers for generous handouts.

Mr. Brunswijk has denied committing the crimes, saying the convictions were part of Mr. Bouterse’s effort to discredit a rival. Without offering details, he said his gifts came from the money he made at a gold mine.

He was eventually captured, but managed to escape and fled to the Netherlands, where he joined Surinamese political exiles plotting Mr. Bouterse’s overthrow.

He returned to Suriname in 1986 and triggered an armed uprising, commanding a force that grew to 1,200 men in a civil war that lasted six years. What he lacked in military experience and strategic vision he compensated for with sheer force of will, war veterans have said.

“He had a strong spirit in him,” Adam Petrus, a former rebel commander, said in an interview. “He didn’t need to pay people. They came to him, they obeyed him.”

The motley force managed to fight the government to a standstill and helped initiate Suriname’s return to democracy. But the political compromise came at the cost of hundreds of deaths and the destruction of Suriname’s economy, from which the young nation never fully recovered.

The war was also the start of accusations that Mr. Brunswijk was involved in the drug trade, as both sides turned to cocaine to finance the conflict, Dutch historians have said.

In 1999, a Dutch court convicted Mr. Brunswijk in absentia of running a cocaine smuggling ring. A similar conviction followed in France a year later, but he has steadfastly denied any involvement in drug trafficking.

He said his fortune came instead from timber and gold-mining concessions he obtained after the war. His first venture was a sawmill, which he set up with a business grant from the Dutch government.

He used the money to go into politics, capturing the small but crucial Maroon vote share and becoming the kingmaker in Suriname’s parliamentary electoral system. He was re-elected to Parliament last year and formed a coalition government with Mr. Santokhi, the president.

As a politician, Mr. Brunswijk continued to help Surinamese in need, paying for medical bills, funerals and houses and earning the devotion of Maroon communities.

The aid ranges from the extravagant to poignant. He has bought new cars for the entire squad of a local soccer team that he owns. But he also helped many refugees return to their villages after the war.

His detractors say the handouts merely keep Mr. Brunswijk’s constituents dependent without offering a real path to self-improvement. But his supporters say the charity is a lifeline in a country without real social protections, and petitioners from across Suriname flock to his office every day.

Mr. Brunswijk now hopes to use his high office to build a real social safety net in Suriname and to bring basic infrastructure to the remote communities that have been ignored by the country’s rulers for centuries.

“This is a historic moment, when the village of my birth can finally have constant electricity,” a visibly moved Mr. Brunswijk said after turning on a power plant in Moengotapoe in December to the joyful chanting of residents. “I always wanted to make this a reality, and now that I’m the vice president, I finally can.” 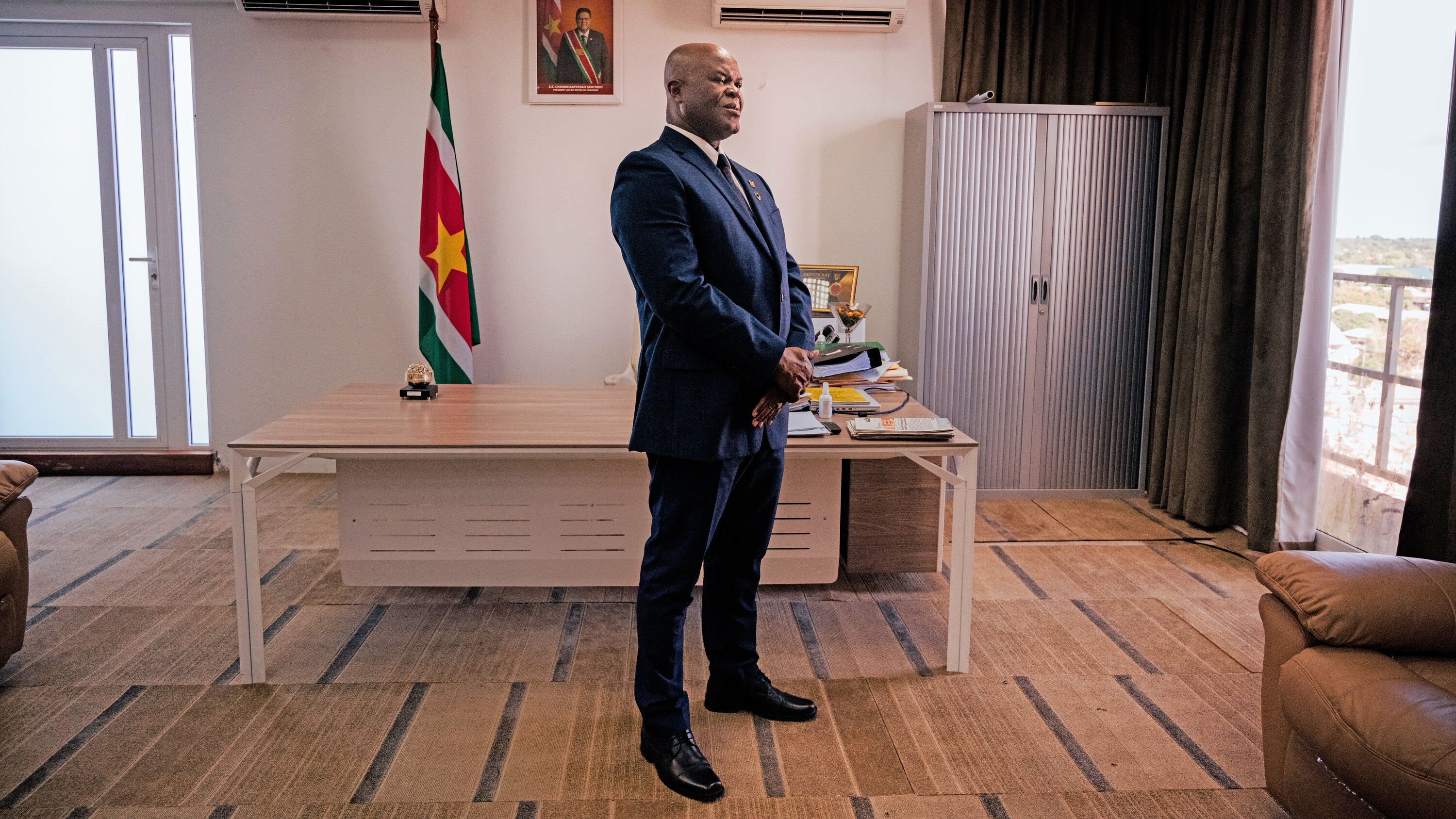