The Tampa Bay Buccaneers were supposed to steamroll the Washington Football Team on Saturday night. Ten-point favorites, the Buccaneers were led by Tom Brady, the N.F.L.’s most prolific playoff quarterback, and numerous offensive weapons, including Antonio Brown and Leonard Fournette. Washington barely won its division with a 7-9 record and were forced to start Taylor Heinicke, who began the season as a backup in the short-lived X.F.L., when quarterback Alex Smith was scratched because of an injured calf.

For more than three quarters, though, Heinicke defied expectations and kept Washington’s offense churning despite almost no running game. Making only his second N.F.L. start, Heinicke seemed to be writing a Cinderella story, throwing darts to his receivers and in the third quarter, launching himself headfirst at the pylon with the football to score a touchdown near the end of the third quarter that narrowed the Buccaneers’ lead to just two points.

But as he has done for two decades in the N.F.L., Brady eventually found a way to separate from Washington and its stifling defense, the fourth-best in the league. In a surprisingly close game, the Buccaneers held on to beat Washington, 31-23. Tampa Bay finally built a comfortable lead after Buccaneers defenders hit Heinicke twice on a drive to start the fourth quarter, sending him to the locker room to have his left, non-throwing shoulder, evaluated.

Brady then took the game over. He hit receiver Mike Evans with passes of 20 and 19 yards the ensuing drive that ended in a touchdown score when Fournette ran for a touchdown to push the Buccaneers’ lead to 28-16. Overall, Brady completed 22 of 40 passes for 381 yards and two touchdown scores. His first, a 36-yard dart to receiver Antonio Brown, put Brady in the record books yet again. At 43 years and 159 days old, he passed George Blanda to become the oldest quarterback to throw for a touchdown in the postseason.

Heinicke wasn’t through, though. He sprinted out of the locker room in time to push Washington back down the field again without missing a Washington offensive play. He hit tight end Logan Thomas and several other receivers before finding receiver Cam Sims in the corner of the end zone with an 11-yard scoring pass, the culmination of an 11-play, 75-yard drive.

Brady returned fire with a drive that ended with Ryan Succop kicking his fourth field goal, to extend Tampa Bay’s lead to the final score with under three minutes remaining.

Without any timeouts, Heinicke came out for one last stab at playoff immortality. But after a sack on third down with under two minutes left, his long pass to Thomas was broken up, allowing Brady to notch his 31st playoff victory, a record for quarterbacks.

Heinicke completed 26 out of 44 passes for 306 yards, and one touchdown and interception. He also led the team with 46 yards rushing.

In the end, though, the Buccaneers, with Brady at the helm, won their first playoff game since Super Bowl XXXVII in January 2003.

With the loss, Washington ended one of the more tumultuous seasons in league history. Team owner Daniel Snyder hired Coach Ron Rivera to overhaul the team, which finished 3-13 last season. In July, Snyder agreed to rename the team after some of its biggest sponsors threatened to abandon their deals if it did not drop its former name, which many Native American groups considered a racist slur. After over a dozen women alleged that they had been sexually harassed by team executives, Snyder then launched an investigation into their claims, which has since been taken over by the N.F.L. Not long after, Rivera was diagnosed with a form of cancer.

The team started the season with a 1-5 record. But an aggressive defense and the return of Smith, helped Washington win six out of its last eight games to claim the N.F.C. East title. During that run, Washington cut Dwayne Haskins, its first-round draft pick in 2019 and the team’s opening day starter.

The Rams’ defense harangued Seattle to pull off the upset.

This N.F.L. season featured the most points and the most touchdowns and so many other offensive mosts that, at times, it felt as if stadiums were missing not just crowds but defenses, too.

Not so in Los Angeles, where the Rams smothered, covered and bedeviled teams to an unrivaled extent. They have the best defensive player in the league. Also, the best secondary. And that is why they were able to beat the Seahawks, 30-20, on the road Saturday behind a compromised quarterback.

Never trailing, the Rams minimized their own offensive inertia, complemented quarterback Jared Goff, who played with a broken thumb on his throwing hand, and held the Seahawks’ offense to 278 yards, their fewest all season.

Los Angeles forced five three-and-outs, sacked Russell Wilson five times and returned an interception for a touchdown. The Rams’ fearsome defensive tackle Aaron Donald, long Wilson’s nemesis, had two of those sacks on the same first-quarter drive before hurting his ribs and leaving in the third quarter.

Donald’s was one of three unnerving injury developments for Los Angeles, which started quarterback John Wolford in place of Goff, whose hand was surgically repaired less than two weeks before the game. Wolford was ferried to an area hospital with a neck injury sustained when Seattle safety Jamal Adams drilled him as he slid on a first-and-10 carry from the Seahawks’ 20-yard line. Coach Sean McVay later said he regretted the play call, and Wolford was able to return to celebrate in the locker room after the game.

Receiver Cooper Kupp, who had four catches for 78 yards, limped to the locker room with a knee injury in the game’s final minutes.

With the third-stringer Blake Bortles inactive, the Rams turned back to Goff, who seemed uncomfortable early. He was sacked on his first drop-back, and even one of Los Angeles’s longest gains — a 44-yard catch by Kupp — came on a pass that was well underthrown.

“It’s got screws in it, and a little bit swollen,” Goff said of his hand. “But pain is not the issue.”

But Goff didn’t commit a turnover in the game and threw a victory-sealing touchdown to Robert Woods with less than five minutes remaining after the Rams recovered a fumble on a kickoff. Even as the Rams advanced to next weekend’s divisional round with an uncertain quarterback situation, McVay was comforted by Los Angeles’s dominance on the other side of the ball.

“Make no mistake about it, we’re going to out to compete, we expect to score points, and I’ll never use that as an excuse for why we haven’t been more productive offensively,” McVay said. “But at the end of the day, you do play games to win them and when you get a feel for the flow of the game and the way our defense has played, I’ve been a tick more conservative than you normally would be in years past.”

The Rams will travel to Green Bay, the N.F.C.’s top seed, next weekend if New Orleans can avoid an upset Sunday against Chicago. Otherwise, Los Angeles will visit either Tampa Bay or Washington.

The Bills won their first playoff game in nearly 25 years.

The annals of the Buffalo Bills’ franchise history are speckled with grief and calamity. The team lost four consecutive Super Bowls, went 18 seasons between playoff appearances and once lost a wild-card game on a last-second kickoff return off a lateral. Buffalo fans have seen some stuff.

And they did again on Saturday, when winning playoff football returned to Orchard Park, N.Y., for the first time in more than 24 years. The Bills fell behind, went ahead and fended off Indianapolis’s spirited fourth-quarter comeback to win, 27-24, for their first postseason victory since Dec. 30, 1995.

After getting intervention from Gov. Andrew M. Cuomo of New York, and an elaborate coronavirus testing program, the Bills hosted fans for the first time this season, about 6,700 of them. The festivities began Saturday morning, when the Zubaz-clad crowd banged the bleachers, played catch with the receiver Stefon Diggs and unfurled banners with glee. One read, “Bundle Up America: We’re Back.”

The party was sure to rage deep into the night in Western New York after Philip Rivers’s Hail Mary attempt from the Buffalo 47-yard line was knocked down, and the Bills, who had lost their last six playoff games, streamed onto the field to celebrate.

By routing Miami last week, A.F.C. East champion Buffalo clinched the No. 2 seed but also facilitated the Colts’ entry into the postseason, as the conference’s first-ever seventh seed. It was also, for the Bills, nearly a tremendous blunder.

Led by the quarterback Josh Allen, who had a role in all three Bills touchdowns on Saturday, Buffalo scored 17 consecutive points, turning a 10-7 first-half deficit into a 24-10 fourth-quarter lead. But as Rivers fired touchdown passes on the Colts’ first two drives of the final period, the Bills managed only a field goal on theirs, giving Indianapolis a final chance to tie or take the lead.

Facing fourth-and-10 from his team’s 37-yard line, Rivers connected with Zach Pascal, who made a diving catch for 17 yards but was stripped after getting up. The reception was upheld on instant replay, giving the Colts first-and-10 at the Buffalo 46, but they lost a yard on their next three plays, failed to reach the kicker Rodrigo Blankenship’s field-goal range and forced Rivers into making a desperate, but incomplete heave.

In reaching the divisional round for the first time in 25 years, the Bills knocked out one of their legends, Frank Reich, who is head coach of the Colts.

To beat the Bills would demand inhuman precision, and Reich knew it. All week, he emphasized to his players the importance of doing ordinary things extraordinarily well, and for the first 28 minutes of the game that’s what the Colts did.

They controlled the clock. They muffled the Bills’ offense. They pinned Buffalo deep.

Against Buffalo, margins are thin. Just how thin was exposed after the two-minute warning, when, leading by 10-7 near the end of the second quarter, they were a yard outside the end zone. Buffalo stuffed Jonathan Taylor on third down from the 1-yard line and Rivers’s fourth-and-goal pass glanced off Michael Pittman’s hands.

Taking over at their 4-yard line, the Bills went 96 yards in 92 seconds because Gabriel Davis had two toe-tap catches along the sideline and Allen, on a drive-reviving fourth down, got Colts defensive end Kemoko Turay to jump offside to give Buffalo a first down. On the next play, Colts cornerback Isaiah Rogers couldn’t hold onto an interception in the end zone.

Given those extra chances, Allen scored on a 5-yard run with 14 seconds left before halftime. And after the intermission, Buffalo’s Tyler Bass drilled a 46-yard field goal to increase Buffalo’s lead to 17-10.

Allen’s dazzling 35-yard touchdown pass to Diggs opened the fourth quarter, and Bass later added a 54-yarder that provided the margin of victory.

And now, after enduring 8,779 days since their last home playoff game, they will wait only a week for the next, against the A.F.C.’s second-lowest remaining seed. 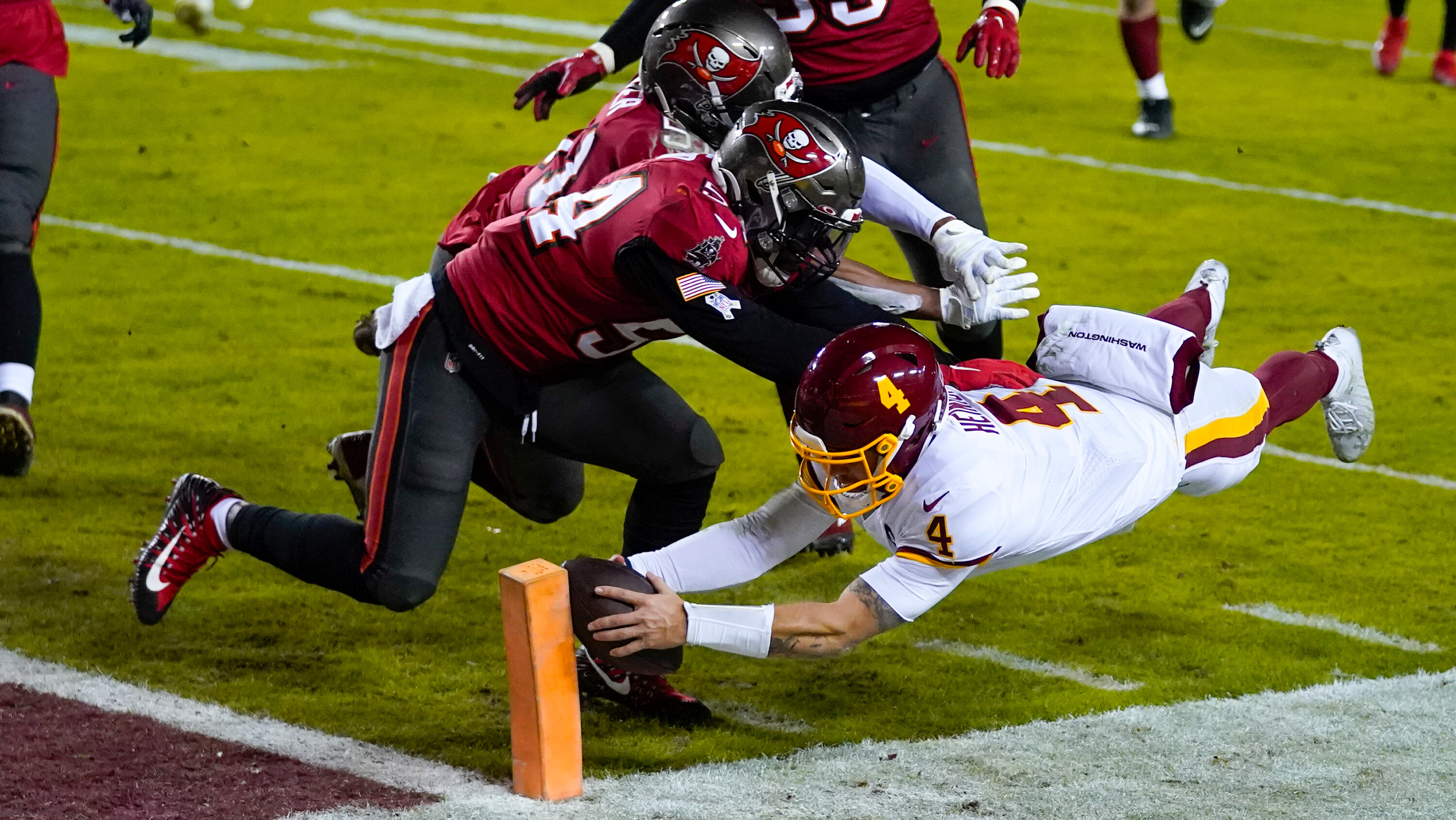