Home Sport Tommy Lasorda, a Dodger From His Cleats to His Cap, Dies at...
Sport

Tommy Lasorda, a Dodger From His Cleats to His Cap, Dies at 93

Tommy Lasorda, the irrepressible baseball lifer who managed the Los Angeles Dodgers to four National League pennants and two World Series championships in a Hall of Fame career that spanned eight decades of bleeding Dodger blue, died on Thursday in Fullerton, Calif. He was 93 and had been the oldest living member of the Baseball Hall of Fame.

His death was announced by the Dodgers in a statement. The team said Lasorda suffered a cardiopulmonary arrest at his home in Fullerton and was pronounced dead after being transported to a nearby hospital.

Willie Mays, at 89, is now the oldest living Hall of Famer.

Lasorda, a chubby left-handed pitcher, had a brief and forgettable playing career — he threw three wild pitches in the first inning of the only game he started for the Brooklyn Dodgers — but went on to become one of baseball’s marvelous characters.

While managing the Dodgers for all or parts of 21 consecutive seasons and working for them into his final years, when he held the title of senior adviser to the team president, he was a perpetual optimist, a compulsive storyteller and, much like Casey Stengel, a celebrity even for people with only a marginal interest in baseball.

Lasorda hugged his ballplayers, remembered their birthdays and the names of their wives and children, and exhorted them to achieve greater deeds — at times speaking in Spanish, most famously in the 1980s with Fernando Valenzuela, his ace Mexican left-hander. His office at Dodger Stadium, lined with photos of Frank Sinatra and stocked with pasta, garlic bread and tomato sauce, was the site of many exultations on the joys of being an American (particularly an Italian-American), a Dodger and a baseball man.

Lasorda took over as Dodger manager for the last four games of the 1976 season, when Walter Alston retired after managing the team for 23 years in Brooklyn and Los Angeles.

Alston was colorless; Lasorda was effervescent and seemingly in perpetual motion.

“My clothes are blue, the Dodger color,” Lasorda once told the writer Roger Kahn. “I won’t wear red. Cut my veins, and I bleed Dodger blue. If trouble comes, I pray to that big Dodger in the sky.”

His teams went to the postseason eight times, the last time in 1996, when Bill Russell replaced Lasorda midway through the season after he had a heart attack and retired. The Dodgers were defeated by the Atlanta Braves in the 1996 National League division series under Russell.

Only three men managed one team for more consecutive seasons: Connie Mack, who owned the Philadelphia Athletics and managed them for 50 years; John McGraw, who managed the New York Giants for all or part of 31 seasons; and Alston. (Bobby Cox managed the Braves for 21 straight seasons, from 1990 to 2010, matching Lasorda’s total.)

Lasorda groomed a host of outstanding young players, and from 1973 to 1981 he managed one of baseball’s most enduring infield alignments: Steve Garvey at first base, Davey Lopes at second, Russell at shortstop and Ron Cey at third.

He also had a role in the Dodgers’ signing of the future Hall of Fame catcher Mike Piazza in 1988, out of a South Florida junior college. The Dodgers took Piazza in the 62nd round of the major league draft as a courtesy to Lasorda, who was friends with Piazza’s father, Vincent, a Pennsylvania businessman, and the godfather of Tommy Piazza, the youngest of Vincent’s five sons.

Lasorda was elected to the Baseball Hall of Fame in March 1997 by the Veterans Committee, which voted on inducting figures who had not been selected in the annual voting by baseball writers. The Dodgers retired his No. 2 soon afterward.

He was later a member of several Hall of Fame panels that succeeded the former Veterans Committee in selecting baseball figures passed over by the writers.

Lasorda coached the United States baseball team that captured a gold medal at the 2000 Sydney Olympics with a 4-0 upset victory over Cuba. He was named a global ambassador and spokesman for the 2009 World Baseball Classic, a tournament that included teams from 16 countries.

“You very seldom hear Tommy talk about anything but baseball and something to eat,” the former Dodger pitcher Roger Craig once said.

Mike Scioscia, the former Dodger catcher who went on to manage the Angels, was convinced that Lasorda meant every word of his gospel.

“Someone else saying it might seem corny, but when Tommy says it, you know he believes what he’s saying,” Scioscia once said. “He knows his talent. He knows his players. He’s the most competitive person I’ve met in my life, whether he’s pitching horseshoes or shooting baskets or pitching baseballs.

“If someone hits his curveball in batting practice, forget it,” Scioscia added. “He takes it as a personal affront.”

On Lasorda’s 82nd birthday, his portrait was unveiled at the Smithsonian Institution’s National Portrait Gallery in Washington, becoming part of a collection that celebrates figures “who have made significant contributions to the history, development and cultural life of the United States.” It was painted by Everett Raymond Kinstler, whose other works include the White House presidential portraits of Ronald Reagan and Gerald R. Ford.

Thomas Charles Lasorda was born on Sept. 22, 1927, in Norristown, Pa. His father, Sabatino, an immigrant from the Abruzzo region of Italy, worked in the Norristown area on railroads, at a meatpacking plant and as a truck driver at a quarry owned by Bethlehem Steel. Sabatino and his wife, Carmella (Cavuto) Lasorda, whom he met in Norristown, had five sons; all except Tommy went into the restaurant business.

Tommy signed with the Philadelphia Phillies out of high school in 1945, pitched in the low minors that season, then entered the Army. He pitched for Army teams in the South before being discharged in the spring of 1947. He was drafted by the Dodgers from the Phillies’ farm system after the 1948 season.

Lasorda pitched a total of 13 innings for Brooklyn in the 1954 and 1955 seasons, with no wins or losses, then was cut in favor of a young left-hander named Sandy Koufax. He had an 0-4 record with the Kansas City Athletics in 1956 before being sent back to the minor leagues.

After retiring as a pitcher in 1960 with 14 years in the minors behind him, he was a Dodger scout, managed in the team’s farm system and coached for the Dodgers for four seasons before succeeding Alston as manager.

After he retired from managing, with a career record of 1,599 victories and 1,439 losses, Lasorda was named a Dodger vice president. He scouted for the team again, was an interim general manager for the second half of the 1998 season when Fred Claire was fired, and became a senior vice president that September, representing the ball club in good-will appearances. He remained a representative for the franchise in the post of special adviser to the Dodger chairman until his death.

In the spring of 1989, Lasorda parlayed his familiar face and his generous waistline into television commercials for the diet supplement Ultra SlimFast. By the summer he reported having lost about 40 pounds off his 5-foot-9-inch frame, having weighed 220 pounds or so.

When he left the company in early 1995 after his contract expired, he did not reveal his weight, but told The Los Angeles Daily News that he needed to lose about 10 pounds. “I’ve lost probably 2,000 pounds over the years and gained 2,030,” he said.

When Manager Joe Torre took the rest of the team to play exhibition games in China in 2008, Lasorda managed a few spring training games for a Dodger split squad in Florida. In his first game, an umpire called the Dodgers’ James Loney out when he was tagged after putting down a bunt. Lasorda contended that the baseball had gone foul and, although the game was meaningless, argued strenuously.

Lasorda is survived by his wife, Joan (Miller) Lasorda, known as Jo, whom he married in 1950; a daughter, Laura; and a granddaughter. His son, Thomas Jr., died in 1991. Over the years, Tommy Jr. was widely reported to have been gay and an AIDS patient — assertions that rankled Lasorda. In a 1992 interview with Peter Richmond of GQ magazine, when the matter was raised, Lasorda said: “My son wasn’t gay. No way. Truth.”

Lasorda did not consider himself superior to his fellow managers when it came to in-game strategy. But he took pride in motivating his players, a skill he honed while managing in the minors, as he told The New York Times when the Dodgers were slumping in May 1996.

He said he had once managed a good Spokane team in the Pacific Coast League that had nevertheless lost seven games in a row, leaving the players dispirited.

“I’m proud of you,” he recalled telling them. “All the sportswriters in the country just voted the 1927 New York Yankees the greatest team in major league history. Do you know the 1927 Yankees lost nine in a row? You guys have lost only seven.” 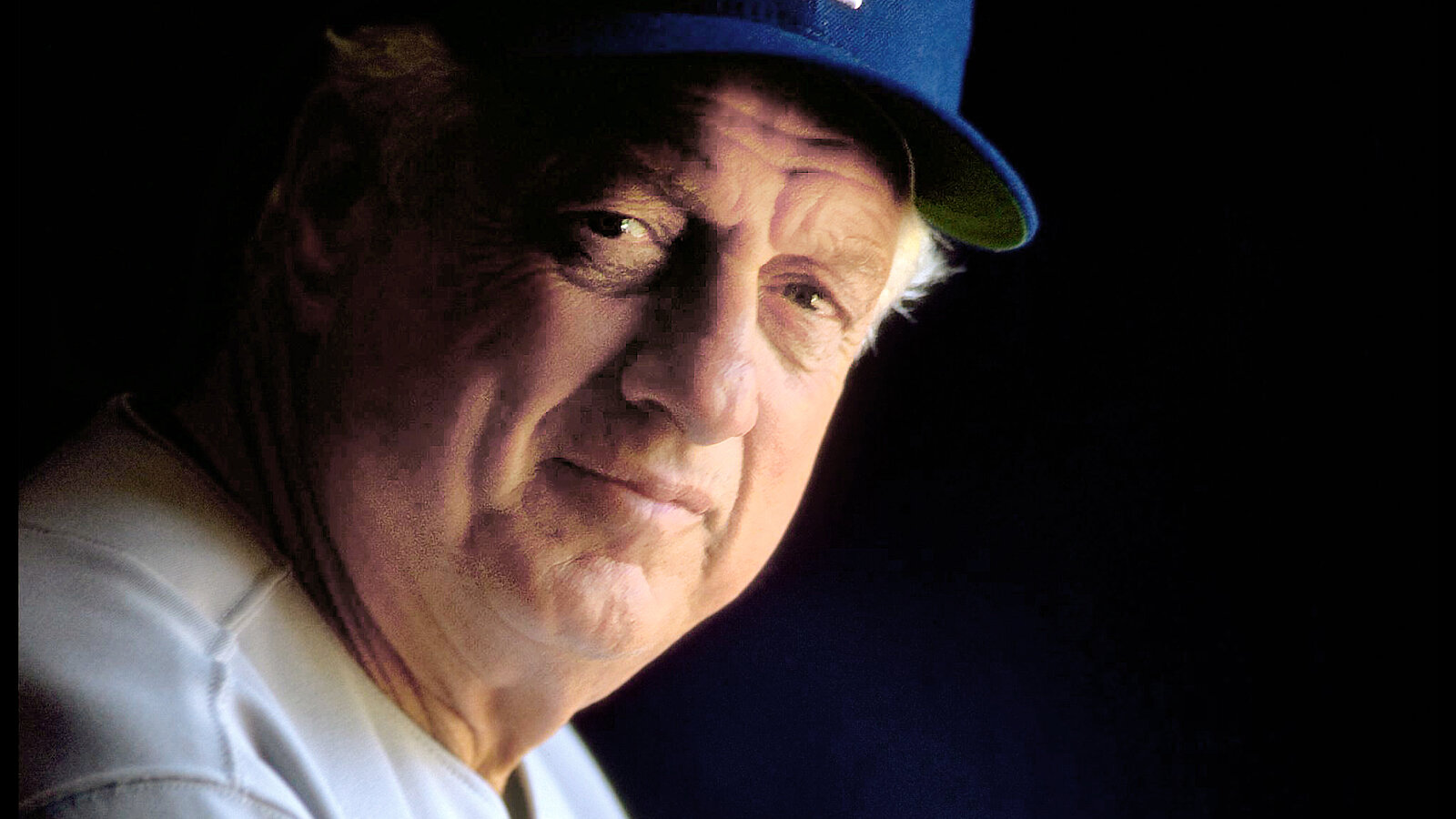 Facebook
Twitter
Pinterest
WhatsApp
Previous articleTalk About a Tricky Assignment. He’s Trying to Catch a Ball and a Baby.
Next articleA Year Without a Win Is About to Get Worse