Answering the phone and having the person on the other end sing softly for 10 minutes, just for you. Another vocalist, this one stationed outside your house for a five-minute concert. A piano recital stretching from dawn to dusk.

An hourlong piece built from field recordings of the wind roaring through bristlecone pines. A guided sound hike through the desert. A pair of homemade chimes, each traveling around Los Angeles, a duet across a city.

Sweet, deeply sincere, outdoorsy, a little trippy — all in all, very Los Angeles: These are some of the performances that will unfold through Feb. 14 as part of Darkness Sounding, a solstice-inspired festival from the local ensemble Wild Up. Billed as “spaced out music during the shortest days of the year,” the event blends sophisticated music-making and Wild Up’s back-to-basics ethos.

“So many of the trappings of new music are about cerebral concepts of form and timbre,” Christopher Rountree, the group’s founder, said in an interview. “We wanted to return to something of the body and for the body. Simple beauty and observing nature.”

Formed in 2010, Wild Up gained crucial visibility during a residency at the Hammer Museum in 2012, and has been expanding a close-knit family of composers and performers ever since. Darkness Sounding, organized by Rountree, premiered a year ago with an all-night drone concert, a collective song circle and more.

Here is a closer look at four of this edition’s presentations. (Events may be affected by changing coronavirus restrictions; updates will be available at darknesssounding.wildup.org.)

‘Two hearts are better than one’

When Rountree asked the composer Chris Kallmyer what he might want to do for the festival, the answer, after months of virtual performances, was: something real. “What would it be like to have people host your music in their own space, to let people come into your bubble?” Kallmyer recalled thinking.

He has long been interested in bells, and has constructed chimes — which he loves because they’re “not the hippest medium” — for previous projects, including works shown at the San Francisco Museum of Modern Art and the Pulitzer Arts Foundation in St. Louis. For his Darkness Sounding piece, which takes its title from a Bruce Springsteen lyric, Kallmyer came up with the idea of forming two sets of chimes: the pipes hand cut, the wood left over from renovations he made to his bungalow over the past year.

Each set will travel to four different homes during the four-week festival. (Potential hosts can apply on Wild Up’s website starting on Monday by describing the sounds they hear in their outdoor spaces.)

A text message arrived just before the phone call. “Remember to breathe,” it read. “I invite you to think about the kindest thing anyone has ever done for you and what that felt like to receive.”

Five minutes later, the vocalist Holland Andrews called; it was time to press play on the audio file that had arrived by email that morning. The music — a smiling, shimmering, gently rising drone — played as Andrews sang in a fresh warble: “It’s no accident the people around you love you.” Andrews repeated the piece’s title, again and again.

“I know it can be scary to hear that,” Andrews sang, “from a stranger on the phone.” It was, coupled with the thoughts Andrews had prompted, a poignant, slightly teary 10 minutes. (Sign-ups begin Tuesday for performances Jan. 26 through Feb. 7.)

“There You Are” is an experiment in whether the phone can be a more personal performance medium. “The goal is for it to be releasing or healing in some way,” Andrews said. “I do my best to sing right at that spot: to create a softness, to create the permission for that to crack open. Because why not?”

‘A moonbeam is just a filtered sunbeam’

Deliberate in its pace, both stark and lush, intimate and inward yet often grand and loud, Andrew McIntosh’s new piece was built from his violin and viola — harshly bowed during improvisation sessions to create a metallic roar — as well as from piano, bowed wine glasses and bowed cymbals.

“I hike a lot, and do some mountain climbing,” McIntosh said. “So I started taking a field recorder along, trying to record the wind in different species of pine trees.”

The resulting recordings of the wind passing through bristlecone pines in the White Mountains, east of San Francisco, add a soft whoosh in crucial passages. All these elements were stitched together electronically and formed into a four-part but continuous work; the third part, “Other middle,” is a quietly expansive oasis, nicked by gentle, glinting shards of sound.

As part of the festival, the hourlong “A moonbeam” will be streamed at sunrise and sunset on three days (Jan. 22-24). “To me, when electronic music is at its best, it creates a dream world or something,” McIntosh said. “All the sound here is acoustically made, but since it’s fairly intensely processed, I think it lives at the threshold: What is electronic dream state, and what is acoustic?”

“When this pandemic started, I said, ‘I just want to carol outside people’s homes,'” the vocalist Odeya Nini recalled. “I just wanted to stand and sing, offering music and that kind of connection.”

Her Darkness Sounding piece is a little late for Christmas, but retains that caroling spirit. She will spend Feb. 11 and 12 traveling around Los Angeles for five-minute performances a safe distance from people’s homes — from driveways, front yards, backyards, porches. (Sign-ups start on Wednesday.) These likely will be wordless events, with an improvisatory spirit at their core. “There’s usually with my work a road map, an arc,” she said. “But what happens is pretty open.”

She compared what she hoped to convey to the little joy that still, almost a year into the pandemic, greets package deliveries: “Thank you for coming to my home and bringing me something.”

“I don’t like to perform on stages,” Nini added. “I like to be facing people, where I’m not above them. When I can see them, come toward them; we’re eye to eye.” 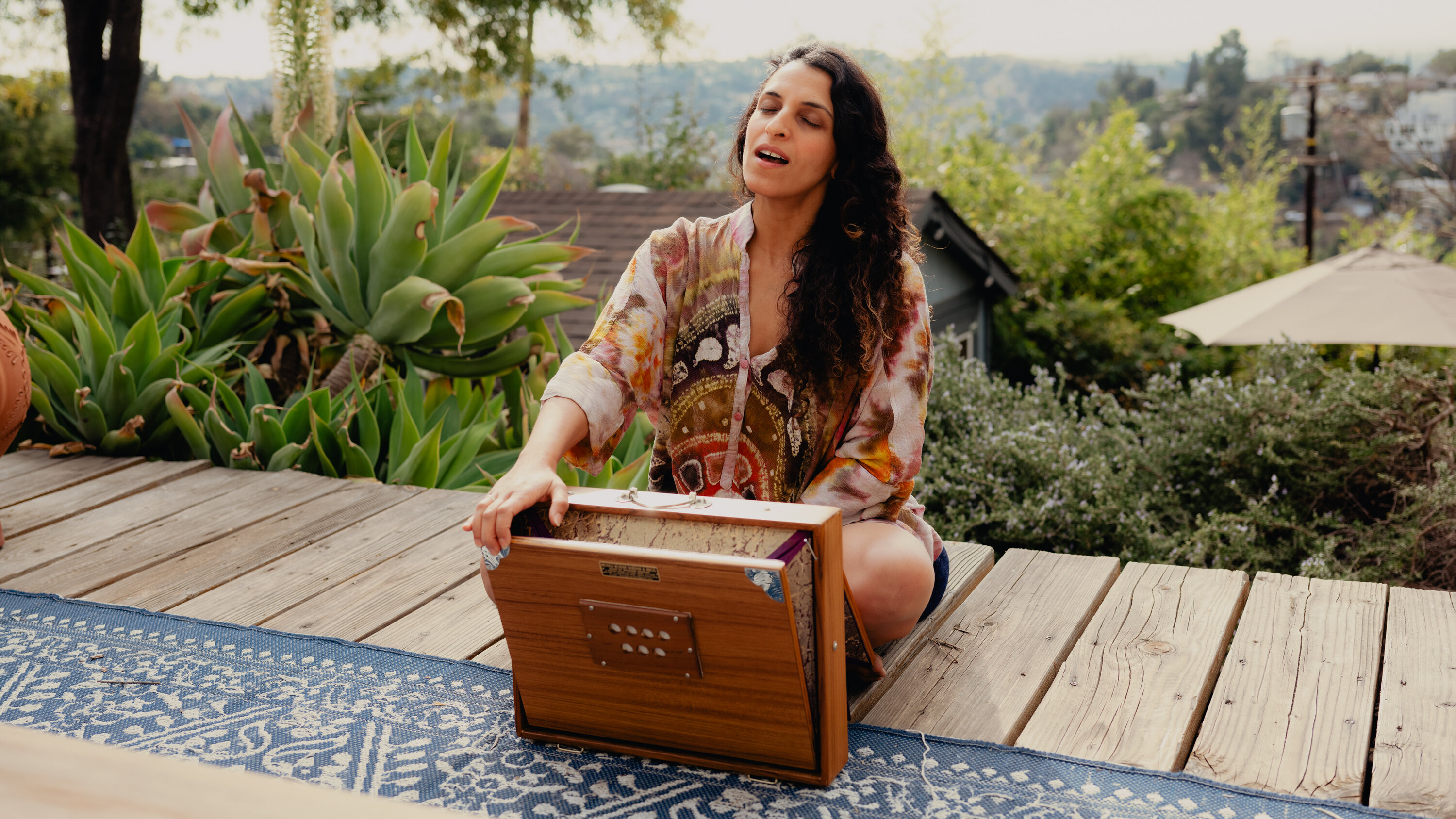